The opposition alliance announced its proposal for a constitutional amendment

LGBTI+s’ constitutional equality request didn’t take place at the proposal for constitutional amendment of the table of six. On the other hand, the concept of “human dignity” is included in the Constitution. 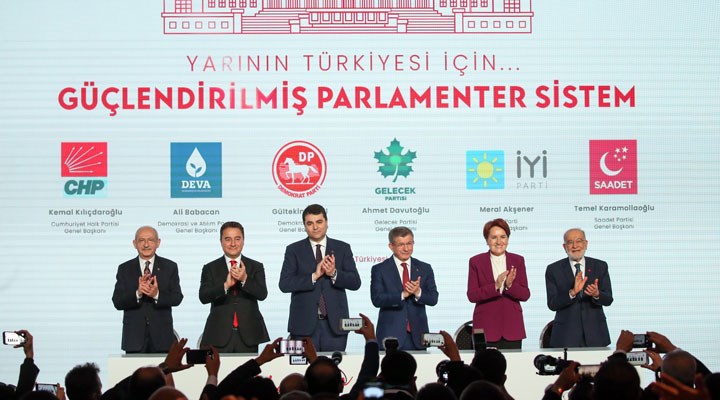 Table of Six, including Republican People’s Party (CHP), İYİ (Good) Party, DEVA Party, Future Party, Felicity Party and Democratic Party, the opposition alliance; announced its Constitutional Amendment Proposal for Strengthened Parliamentary System, today. Within the scope of the 167-article Constitutional Amendment Proposal, which proposes amendments in 84 articles and 9 chapters, the authority of the President was determined and it is remarked that the election threshold will be lowered to 3 percent and an absolute majority of the total number of members will be required in order to lift the parliamentary immunity.

The leaders, provincial and district administrators, and members of the six political parties and journalists came together at Bilkent Hotel in Ankara.

The amendment proposal was presented as follows:

“Today is a substantial day regarding our history of democracy! We are excited and proud of turning over a new leaf in our 150-year constitutional tradition. With the aim of constructing Turkey of the future, we, as six political parties representing the widest spectrum of society, break new ground regarding our history of democracy and submit a ‘Constitutional Amendment Proposal for Strengthened Parliamentary System’, which was prepared by total consensus by making a wide stride, to the consideration of our nation.”

Constitutional equality, which has been demanded by LGBTI+ movement since the early 2000s, didn’t take place at the Constitutional proposal of the table of six. Table of six didn’t propose an amendment for Article 10, which regulates equality before the law.

On the other side LGBTI+ movement demands to add “sexual orientation” and “gender identity” to Article 10, which regulates equality before the law, to eliminate discrimination.

In addition, table of six, removes the part, which connects fundamental rights and freedoms to “duties and responsibilities of the individuals to society, their family and other individuals”, and adds the followings:

“Human dignity is inviolable and the basis of the constitutional order. The state is responsible for respecting and protecting human dignity.”

The new article added by the table of six is as follows:

The “superiority” of rights is preferred instead of the “restriction” of fundamental rights for the other proposals as well by adopting the principle “in favor of liberty” (Freedom is essential, restriction is exception).

Freedom of press, expression and association are expanded