The police’s determination against the rainbow flag in İzmir

Police did not allow the rainbow flag during the Boğaziçi demonstrations in İzmir, chased those who waved the flags, male police searched a female citizen's bag and took the rainbow flag. 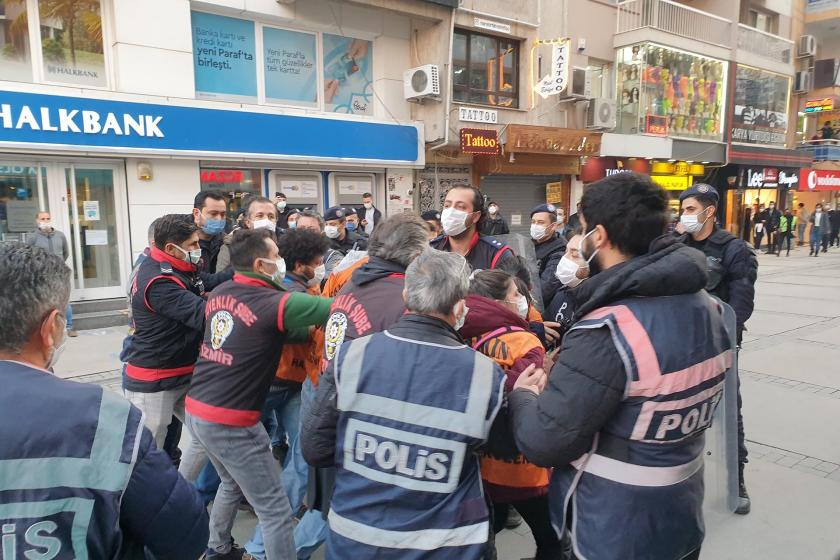 Police attacked those who wanted to protest in Alsancak-İzmir to support the Boğaziçi. Police detained university students by beating and dragging them on the ground. Those detained were handcuffed on their backs and put in the police vehicle. After the police attack, a press statement was planned to be held at Gündoğdu Square of İzmir. While negotiations with the police for the press statement were continuing, the police wanted to take the rainbow flag, advancing on the two people who were carrying the flag.

According to the information given by lawyers to KaosGL.org, the police intimidatingly advanced on the two with the flag. Peoples' Democratic Party (HDP) MPs Murat Çepni, Garo Paylan, Serpil Kemalbay, Erol Katırcıoğlu, Necdet İpekyüz, lawyers and students from İzmir Student Solidarity said that the flag was the LGBTI  and it did not represent any criminal element, the police insisted on taking the flag and said "There is no such thing as an LGBTI + flag" to the lawyers.

Later, the police attacked in Gündoğdu Square too. Many people were detained here as well.

The residents and shopkeepers in Alsancak protested the attitude of the police against the students with applause and whistles.