Turkey’s Presidential candidate: The existence of LGBTI is perceived as a crime

Turkey’s Presidential candidate Selahattin Demirtas: The call for a new life’ is for sexual freedom in society. 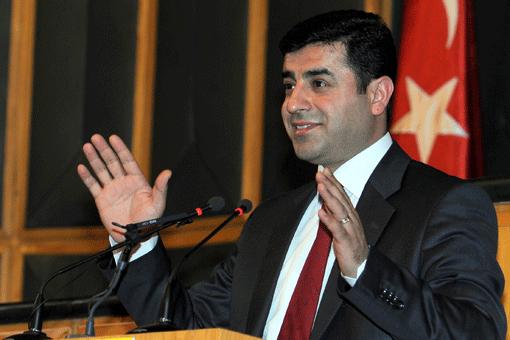 Turkey’s Presidential candidate Selahattin Demirtas: “The existence of LGBTI is perceived as a crime. Homophobia and transphobia are being fed. The ‘call for a new life’ is for sexual freedom in society.”
Presidential Candidate and Co-president of HDP (Peoples’ Democracy Party), Selahattin Demirtas, presented his policy declaration titled, “Call for a New Life,” in a press conference held at the Sisli City Cultural Center on July 15th.
“The ‘Call for a New Life’ is for sexual freedom in society”
Demirtas, while criticizing the current policy of repression toward the LGBTI, said that his ‘call for a new life’ was a roadmap for radical democracy and that it called for ‘sexual freedom in society.’
“LGBTI people, who are targeted, killed, repressed, ostracized because of their sexual orientations and sexual identities are ignored by the system. LGBTIs’ mere existence is seen as a crime. Homophobia and transphobia are fed. ‘New Life’ calls for equal citizenship rights for all sexual identities to live free and honorable lives in society without fear of discrimination.”
Demirtas had the following to say on the murders of women:
“At least five women are massacred every day. The male dominated society, which allows no space or freedom for women, continues its femicide. We have always stood up against all kinds of violence and discrimination against women. Our stance will continue. ‘New Life’ can only be organized with the leadership of women. A society can only be as free as their women are.”
Erdogan, Ihsanoglu and LGBTI?
The two opposing presidential candidates, Recep Tayyip Erdogan and Ekmeleddin Ihsanoglu, did not utter a single phrase of commitment for the LGBTI. Ihsanoglu had claimed that homophobia was not a universal issue. During Erdogan’s government, the AKP had objected to clauses on sexual orientation and gender identity being written in the constitution. The ruling AKP (Justice and Development Party) MPs had maintained their stance that homosexuality was a sickness and perversion and popularized homophobic hate speech.
“Does not play anything other than the baglama”
Demirtas chose to urge the crowd to applaud 15-year-old Gezi victim Berkin Elvan’s family as opposed to Recep Tayyip Erdogan who had his party boo them in a speech. Demirtas’ election slogan touches on the recent corruption allegations: “Think of a presidential candidate, who plays nothing other than the baglama.”*
Demirtas explained that the ‘New Life’ would sprout only through those who are not in power and whose voices are not heard because of ethnic, religious, sexual and class discrimination. The following points stand out from the policy declaration:
“Constitution for all peoples”
“This democratic nation is made up of Turks, Kurds, Alevis, Armenians, Greeks, Yazidi, Syriac, Keldani, Arabic, Circassian, Laz, Pomak and Romani. All forms of political singularity will end and be replaced by a pluralist form of government. We will make a step from the government’s constitution to the constitution for all peoples.
“Repression of Alevis, Christians, Jews, Yazidi and similar religious and cultural groups must stop. The road must be paved for everyone to express their religious beliefs as well as live free social lives in a democratic and pluralistic way.”
“The Administration of Religious Affairs must be abolished”
“The right for worship in one’s native language must be guaranteed. The Administration of Religious Affairs, who only served the government’s religious agenda up until now, has to be abolished. The government’s relation with any group based on a singular form of religion must stop. Starting from textbooks, all documents that include hate speech against other identities and beliefs must be cleared out. These forms of hate speech must be penalized.
“All Cemevis and other places of worship must be granted legal standing.”
“We defend animals’ right to life”
“We are fed by the soil. Our blood is cleansed by the air. Our life’s source is water. All other species that we share this earth with…. If you cannot dare to stand and resist with them, then you have no right to talk about democracy, justice or a future for humanity.
“The right to life is not meant only for humans. It is one of our main principles to defend this right for animals.”
“Young population should be held in the highest regard”
“Active representation of youth in politics and society will be insured by the ‘youth councils’ that will organize under the ‘people’s councils’. All laws and legal obligations against youth organizations will be lifted. Political, economic, social and cultural activities of youth shall be assured by the state.
“‘New Life’ will be the voice of youth, instead of the voice of those that see youth as a security issue and contain it. The young promise us the good news of ‘New Life.’ The young population is not something to ‘deal with,’ the young population should be held in the highest regard.
“The working conditions of laborers based on flexible employment, subcontracted and uninsured work, and lacking job security not only steal their monetary earnings but stand in the way of workers’ rights.
“We aim for a presidency in which occupational health is properly inspected, child labor is prevented, seasonal agricultural workers’ labor conditions are regulated; a presidency that strives to ensure all social rights of laborers.”
*A pun, in which the Turkish word “steal,” “calmak,” is also a homonym for the word that means “playing a musical instrument.” The baglama is a stringed musical instrument.
Translation: LGBTI News Turkey
Check out the candidates for the Presidential elections to be held on August 10 and their stance on LGBTI rights:
Turkey to elect new President: Will LGBTI rights make it to the Presidential palace?