Turkish court: How did trans person disturb you?

Turkish Ministry of Internal Affairs is sued for indemnity after penalty fines for ‘disturbance’ given to a sex worker, T.T., were repealed. 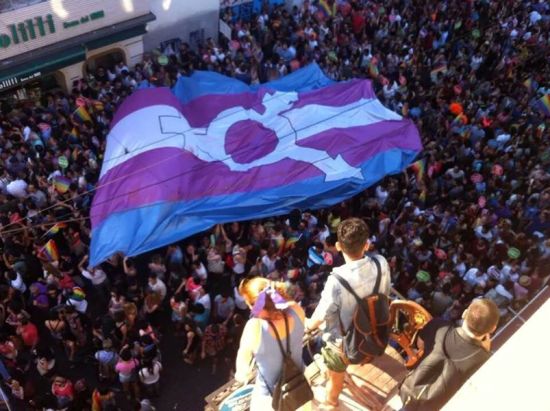 Turkish Ministry of Internal Affairs is sued for indemnity after penalty fines for “disturbance” given to a sex worker, T.T., were repealed.
Istanbul LGBTI Pride, June 29th, 2014
As Ismail Saymaz, a news reporter from Radikal, reported; penalty fines given for disturbance according to law of misdemeanor to T.T., a sex worker, was canceled by the judiciary. Two different courts agreed that “the disturbance act does not coincide with the act defined in the official report, the occurrence of the act is still ambiguous, the report does not clarify what is meant by the disturbance act and there can be no penalty fine given for an abstract reasoning” and reversed the judgment. T.T.’s lawyer Ahmet Tokoz claimed in his petition that police officers systematically punished trans people for their gender identities.
“What does it mean to disturb?”
On April the 24th and 25th, T.T. was fined by the police for disturbance in Ankara. Police filed the report according to 37th article of the law of misdemeanor, as a “disturbance” act. Ahmet Toköz, T.T.’s lawyer objected to the punishment. The Judge of the Criminal Court of Peace Recep Kinali, reversed the punishment by saying that “the act is reported by unknown neighborhood residents” and claimed that “the act of disturbance written in the report did not match with the actual act defined”. Kinali also pointed out that “the occurrence of the act is also not certain” and therefore canceled the 91TL fine on July the 1st.
T.T.’s second fine issued on April the 25th was also denied by the judge of Ankara 4th Criminal Court of Peace, Zeka Kayali. Kayali repealed the punishment since there is no specific definition of what the disturbance crime is and claimed that the court cannot punish anyone by using abstract evidences.
“Systematical attack”
After the fines are repealed, Ahmet Tokoz sued the Ministry of Internal Affairs for atonement. He protested that police officers regarded T.T.’s sexual identity as a crime and punished her many times for her sexual identity. Tokoz supported that this is actually a separation act based on sexual identity.  Tokoz also recorded that his client T.T. was also taken into custody after the fine was given and claimed that police officers not only stopped his client unjustly but they also limited her freedom by taking her to the police station and holding her there. Tokoz also asserted that police officers from Cankaya Police Department fined trans people many times for acting as a prostitute and he reminded that nobody can be punished for “acting as a prostitute”. He mentioned that this act of punishing is also against the European Convention of Human Rights in terms of freedom and security rights, right to be judged by the courts and prohibition laws of discrimination. Tokoz finished his claims by saying that “These officers repeated their acts many times. My client, who has the ultimate right to live freely in this country, is restricted to think that she is in danger because of her gender identity, sexual orientation and sexual expression and she cannot find any solution to this problem”.
Translation: Asli Aygunes