After walking down a flight of stairs in Boğaziçi University’s historic and hilly North Campus, located in Istanbul’s Etiler district, you turn left. Ducking out of the winter cold, you enter a cluttered and energetic world. 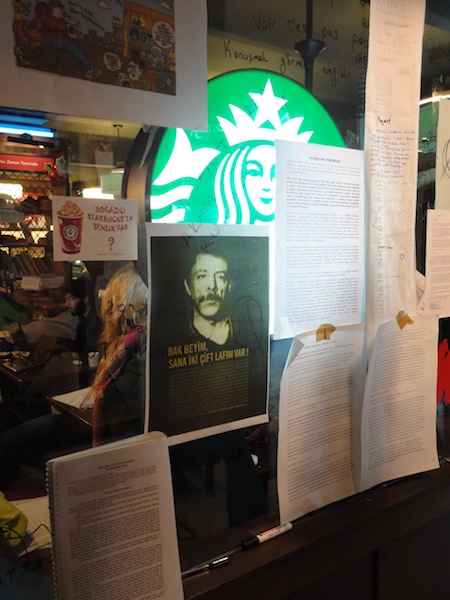 After walking down a flight of stairs in Boğaziçi University’s historic and hilly North Campus, located in Istanbul’s Etiler district, you turn left. Ducking out of the winter cold, you enter a cluttered and energetic world. A dozen or so students are perpetually here, and the low lights are punctuated by the cold glow of laptop screens. Almost every free wall space is covered with sign-up sheets, notices, slogans: Queer, Kurdish or Palestinian; a shopping list, lists for overnight stays, workshops, film screenings, open classes. Welcome to Occupied Starbucks.
On December 6, almost as soon as Starbucks opened on campus, a semi-spontaneous protest, supported by groups ranging from the Boğaziçi LGBT group to the Social Sciences Club, entered and occupied the coffee shop. They brought kilims and beanbags, as well as a cadre of activists who now maintain a twenty-four hour presence. Although this occupation is explicitly directed against Starbucks’ opening on campus, it would be a mistake to characterise the occupation as hostile or oppositional. The Starbucks, although having been taken over, has not shut down. It still functions, serving the few customers who tiptoe over occupiers to place their orders of nine lira lattes.
Starbucks in Turkey has firmly positioned itself as an elite luxury brand, and for good reason. The price of a large (“Venti” in Starbucks parlance) sized mocha − 11 lira − could easily cover a full meal at an Istanbul sit-down restaurant, or feed a whole group of friends at one of the subsidised campus yemekhanes (food halls).
Boğaziçi might be an elite university, recognised as one of the best in Turkey, but it is still a state school. Its doors are open to anybody who passes the entry exam, and the tuition is a mere 200 lira per term (around 100 US dollars). The school may have historic and ivy-covered buildings, and it may count foreign ministers, business moguls and Americanised elites among its alumni, but Boğaziçi is not a school for the rich. The students who are now occupying Starbucks readily admit that the opening of the coffee chain was, for them, symbolic; marking what they see as Boğaziçi’s transition to a for-profit, expensive school that is only open to elites.
Choosing a cafe as the target for protests might seem tangential or petty when compared to the larger issues of neoliberalism, institutional transparency, and the future of higher education in Turkey. But campus student space − and especially tea and coffee serving areas − have a politically and emotionally resonant history in Turkey. Student canteens have always been at the centre of university life. Prior to the 1980s, all universities were state-run. As part of this system of universal and free (or heavily subsidised ) higher education, student canteens − which at some universities would be as many as one for each department − would provide small snacks, tea, and coffee for a nominal fee.
In the politically turbulent 1970s and 80s, campus canteens were at the centre of student radicalism. It was here that meetings and rallies were held; this is where parties formed, fractured, and re-formed. Turf was constantly being staked out. As part of campus polarisation, which mirrored the country at large, one canteen would become controlled by Maoists, another by Fascists. By the end of the 1970s, as left and right wing groups battled nationwide, political violence within student controlled spaces was not uncommon.
One Cafeteria At A Time
The military coup of 12 September 1980 hit the education system hard. Universities, which were viewed by the army as hotbeds of dissent, were placed under the oversight of the Council of Higher Education (YÖK in Turkish), a body implicitly charged with making sure that they stayed sedate and in check. Under the YÖK, many student groups were disbanded and a system of student representatives, the ÖTKs, were put in place to give students a voice within the university. These institutional steps, coupled with a wave of state terror that targeted students heavily, paved the way for what would come next.
The ruling junta and the subsequent administration of Turgut Özal began a long process of privatisation and neoliberal “structural adjustment” of the country, a process from which the educational system was not exempt. Private universities were starting to be allowed, and universities like Boğaziçi now had to compete with them. Tuition was raised and scholarships cut. 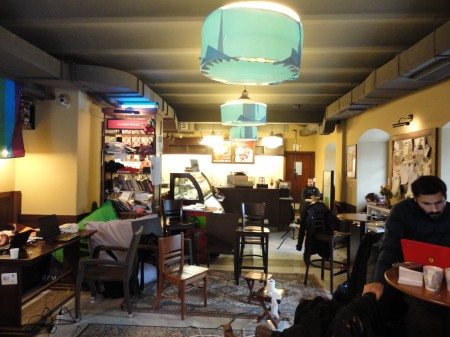 The student canteens and yemekhanes felt the pressure. Boğaziçi’syemekhanes became contracted to a company operating for profit and without guaranteeing employees the benefits they would enjoy as university workers. Student canteen prices rose throughout the 2000s. The price of a cup of tea − the lubricating agent of all Turkish social life − doubled. 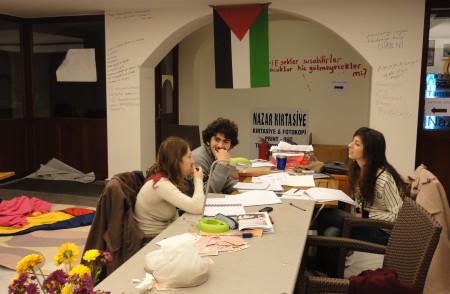 This progression of events is everything but dry history for the students that now occupy Boğaziçi’s Starbucks. Things have changed during the past few years; not long ago there was a relatively cheap and decidedly not-upmarket food court where Starbucks now is. Then, to the fatalistic shrugs of students, Dunkin’ Donuts opened, and the classically simple Orta Kantin was turned into a sleek café.
“This is the last straw” is a line often heard from the occupiers. Starbucks, when it opened, became the symbolic tipping point. For the occupying students, cheap quality food availability is the explicit issue (the simmering cauldrons of pilav or beans which they distribute free of charge attest to their priorities), but they also see the occupation as a starting point; an open forum for discussing what is happening to higher education in Turkey.
The students have done a lot with the physical space that has been claimed. Kurdish-language film screenings are on the daily schedule, along with open classes given by the Boğaziçi faculty or visiting Egyptian activists. Stencil art of the murdered Nigerian migrant Festus Okey can be seen side by side with letters of solidarity from Occupy Wall Street or manifestations of transsexual pride.
The future of Occupy Starbucks is not exactly certain. Demands have been presented to the university rector from the a several hundreds-strong group. The occupiers want to close the Starbucks and bring theyemekhanes back under university control to insure low prices and employee benefits. They also ask for an official space to open a cooperative cafe, and for the university to provide greater transparency about campus nutrition decisions, preferably through a student assembly rather than the ÖTK. The rector is currently taking the list of demands to the board of directors, and should get a response by next week. Perhaps more importantly, sympathy occupations have started at the Middle East Technical University in Ankara and the Trakya University in Edirne. Cup of tea in hand, students want their space back.
http://mashallahnews.com
Josef Burton