Women’s and LGBTI organizations: It is not creation, but Constitution!

Women’s and LGBTI organizations responded to Turkish President Erdogan’s view on ‘fitrah  creation’ of women: ‘It is not fitrah  creation, but Constitution. Women and men have equal rights.’ 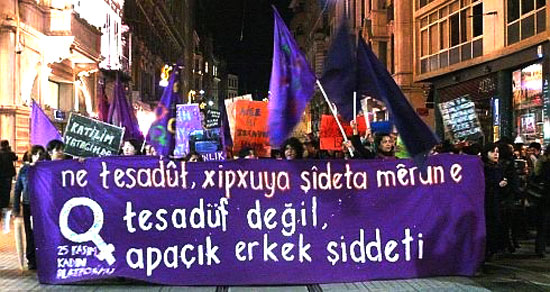 Women’s and LGBTI organizations responded to Turkish President Erdogan’s view on “fitrah – creation” of women: “It is not fitrah – creation, but Constitution. Women and men have equal rights.”
"It is no coincidence, it is obviously male violence"
President Erdogan’s statement “Women and men cannot be equal. It goes against the fitrah – creation” has drawn criticism from women’s and LGBTI organizations, including Kaos GL Association.
Led by a women’s NGO “Women for Women’s Human Rights – New Ways”, women’s and LGBTI organizations made a written statement, underlining that Erdogan’s statement goes against the goal of gender equality set in many international conventions Turkey signed off.
Here is the full statement:
Turkish President Recep Tayyip Erdogan once again made his public claim that women and men cannot be equal. He had expressed his view back in 2010.
This claim of Erdogan is against all the international declarations and agreements about gender equality that Turkey had undersigned. Besides, according to the gender gap report of the WEF, Turkey is 125th among 142 countries in terms of gender equality and President Erdogan’s claim made it official that Turkey will not execute policies to achieve gender equality!
The Article 10 of the Turkish Constitution states that “Men and women have equal rights. It is the responsibility of the Turkish State to realize this equality.” Therefore, President Erdogan breaches the Turkish Constitution with his claim.
President Erdogan wants to destroy all the progress that the women’s movement has achieved for decades. This claim is also against CEDAW and the Istanbul Convention that Turkey had signed. According to the Article 90 of the Turkish Constitution the signed international agreements are regarded as law in Turkey. This claim is also against 1995 Beijing, Beijing +5,+10,+15 and all related UNCSW agreements. We, once again remind that justice cannot be achieved without equal rights. We witness the fact that violence against women is increased by 1400% mainly because of denying the international equality clause like this.
Many women’s rights organizations have signed this call, including the European Women’s Lobby who fully supports its Turkish members that once again remind that equality is not something that we bargain, it is a democratic and an international right. We totally reject this claim which aims to take our basic rights that we had gained 100 years ago!