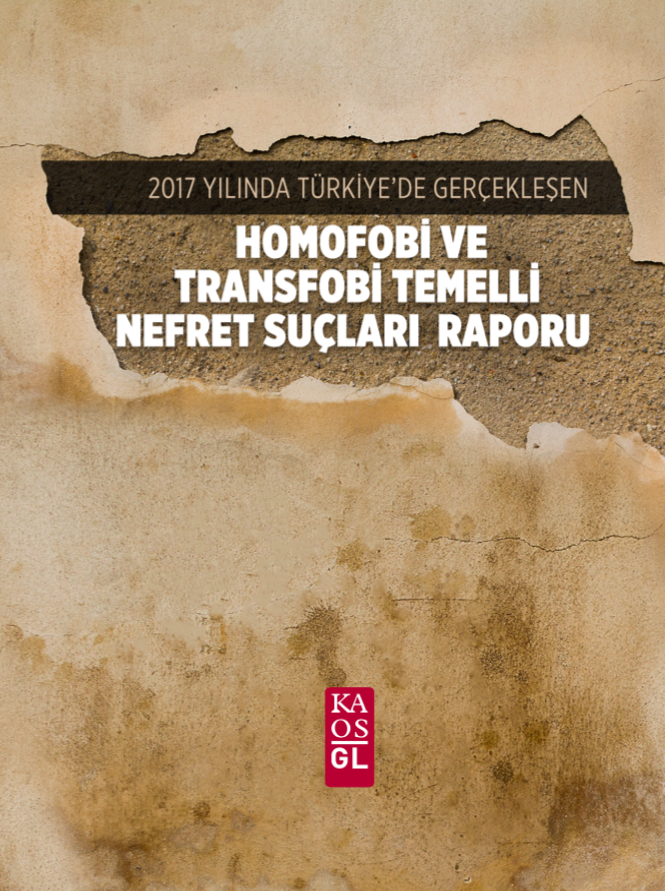 According to Kaos GL's 2017 Hate Crime Report, hate crimes are mostly performed in public space; perpetrators are typically more than two people and attacks take place in front of the eyewitnesses.

Kaos GL Association has shared The Report of Hate Crimes Based On Homophobia and Transphobia in 2017, Turkey with the public.

The association used a communication network which covered several cities of Turkey and individual and organizational communication networks in Ankara for the survey-based report. In order to reach the victims and witnesses nation-wide, Kaos GL worked meticulously to benefit from its daily updated news portal and other social media tools in the most effective way.

The report was written by Prof. Dr. Melek Göregenli. And, Murat Köylü, Kaos GL Association's International Relations and Advocacy Coordinator was the editor of the publication.

In the preface of the report, Göregenli points out to the prohibitions against LGBTI activities and says the following, related to hate crimes:

“Apart from the hate crimes which occurred in 2017, prohibition decisions of public authorities and obvious hate discourses and crimes of certain groups against LGBTI were legitimized by public authorities, instead of being prosecuted. Also, it should be considered that the violence and hate crimes against women, children and other social groups find a basis and become increasingly widespread because of this same mentality.”

117 survey questions which were presented on the report, were replied by 93 victims and 24 witnesses. Only the surveys completed by the people who were physically existed on the crime scene during the incident, were accepted as valid. Survey records were filtered by "credibility, completeness, consistency and eliminating the duplicate entries".

Victims experience violation of their rights more than twice

In average, victims experienced violation of rights more than two times per case: 117 respondents stated 267 types of violation of rights. Generally, hate speech based on sexual orientation and sexual identity and threats of excessive violence (torture) were accompanied by "more severe" violations. Physical violence has been the second frequent one.

58 of 270 violations were attempted murder, physical violence, shootings, rapes or assaults which included other sexual attacks. Only 14 of these 52 cases were reported to the police force, 5 of them were brought to trial. Witnesses of 3 cases were police officers; actors of 5 cases were not knowledgeable with the legal processes.

According to the report, most of the victims were seriously afraid of their families and the law enforcement. They were not trusting the trials and other governmental bodies. For this reason, extremely few cases were reported to law enforcement forces or law courts. Only 19 of 117 cases were reported to the police, and only 7 of them were submitted to the court. In only 1 case, a police incident was considered a hate crime.

Perpetrators include two or more people

More than half of the witnesses are non-reactive

In more than half of the incidents, the assaults were performed in front of two or more eyewitnesses.

More than half of the eye-witnesses (55%) did not react to the incidents. 15 percent adopted a victim-supporting position. In 18 percent of the cases, some eye-witnesses supported the victim, and some of them supported the perpetrators. The report highlights the behavior of the witnesses:

“Silence of eyewitnesses against hate crimes or their facilitating attitudes, help the commission of a crime and they also point out to the background of the social ideologies which cause these hate crimes.”

Testimonies of the hate crime victims also take place in the report. Below are some of these testimonies:

“I've started to feel a constant fear that I might be exposed to violence anytime, since I began to think that I do not belong to the society.” (a gay person who is a physical violence victim)

"I felt bad. I was dreaming about the dispute every night. Well, I've recently felt a little better; I'm putting the event behind. I won't be able to forget it easily though.” (a trans individual who is a victim of an insult and verbal attack)

“After the incident, I had to use tranquilizers continuously, I was not able to sleep and I was always crying.” (a bisexual woman who was subjected to insults and verbal attacks via social media)

“I still can't sleep. I had to move to a new house after I was taken into custody. A psychological violence which is beyond human dignity exists in TEM. I was affronted since I resisted to be searched naked.” (a trans woman who is a physical violence victim)

“I'm anxious. I'm always thinking if such a verbal lynch happens again or if it turns into a physical violence, if I get kicked out from the dormitory or if they inform my family.” (a lesbian person who is the victim of an insult and verbal attack)

“I felt terrible for a long time. I walked with the fear of threat in the street. It adversely effected my sleep. I tried to hate, too.” (a bisexual man who is a physical violence victim)

To read the complete Report of Hate Crimes Based On Homophobia and Transphobia in 2017, Turkey, (in Turkish) please click here. You can contact with Kaos GL Association for a hard copy.

Human Rights Watch Report, which is another report of Kaos GL Association is based on media monitoring and it consists of only the cases which are represented in the media. Kaos GL’s Report of Hate Crimes Based On Homophobia and Transphobia in 2017, Turkey uses a monitoring method based on the answers given to surveys made in person, online and via phone; and only the data provided by the victims or witnesses are covered.

2018 Hate Crimes Research is in progress

Kaos GL calls for the participants who are subjects or witnesses of homophobic and transphobic hate crimes in 2018, too. To participate in the survey in Turkish, please visit here.