5th Antalya Pride Week: “We are still seeing colorful even if it all gets painted in black” 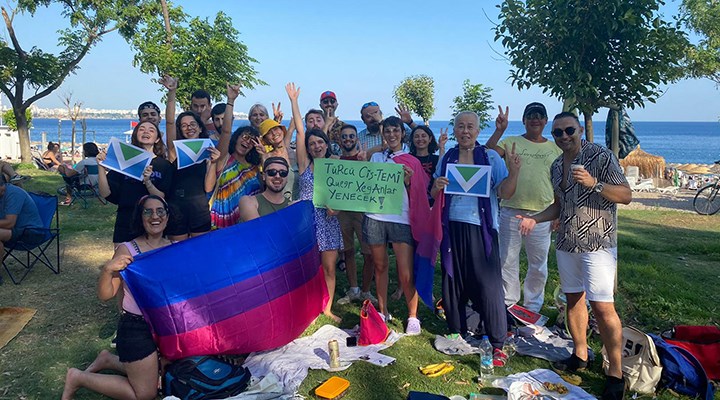 5th Antalya Pride Week, that took place between June 21-27, has posted its press release on its social media account.

The press release of 5th Antalya Pride Week, that was organized by the Antalya Biz Sexual Orientation and Gender Identity Studies Association, mentions the joint struggle of LGBTI+’s, whose rights were substantially usurped during the pandemic, and says ‘We are not giving up on the İstanbul Convention’.

The whole text of the press release is as follows:

“We are here today as the Antalya Biz Sexual Orientation and Gender Identity Studies Association for the 5th Antalya Pride Week events.

“We are embracing the two pride events that were celebrated by the Queers of Antalya on 2013-2014.

“We've been through a lot. People have been laid off; had to work despite all the risks; had to live at home with their families who bullied them; couldn't find jobs; got isolated due to difficult living conditions during the pandemic and the social carnage that came with it. We have already become more insecure about issues such as domestic violence and discrimination, while bureaucratic difficulties in accessing social rights were getting raised before, discrimination, exclusion and antagonism are being propagandized by the state.

"The pandemic has been an excuse to limit freedom of expression in every way.

"Hostilities were tried to be nurtured through the existential, cultural, and lifestyle differences of the people. A masculine/anti-democratic system becomes a lifestyle for us; a system that declares those who do not eat cheese as enemies just because they like cheese themselves, while olive eaters are being declared as terrorists or perverts.

"The country has been plunged into a deep economic crisis in the aftermath of a deep anti-democracy crisis. Our pride marches and events have been sacrificed and banned for years by this anti-democratic system.

"Some of us were able to stand side by side in solidarity during this difficult time, while others felt alone, unable to ask for help.

"Since the beginning of the pandemic, we had a hard time seeing and understanding each other. Sometimes our vision wasn't enough to see some things. Solidarity is necessary for times like this.

"We, together with ourselves, will continue to demand EQUALITY and FREEDOM for women and all oppressed and marginalized, continue to demand an honorable life for all the poor and the working class, and to demonstrate our stance against GENTRISM, RACISM AND NATIONALISM. We are friends of the oppressed.

"Since The King of Pergamon II who said 'Go find me the paradise of the earth';  we always strived to turn the face of the earth and the face of our love to heaven with our colors while holding onto our pride.

"We are still seeing colorful even if it all gets painted in black.

"We will again show our proud stance and shout: "LOVE HAS NO GENDER" We say that more rainbows and more love is needed to color our lives"

"We will never give up our dreams, our colors and the İstanbul Convention...