A trans woman in İstanbul has been stabbed in the back

A trans woman in Tarlabaşı, Istanbul, has been stabbed in the back; the police didn’t intervene. 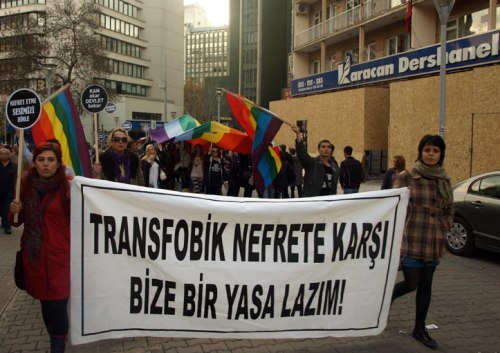 A trans woman in Tarlabaşı, Istanbul, has been stabbed in the back; the police didn’t intervene. Lawyer Levent Pişkin evaluated the situation, saying that “the increase in attacks is related to the Islamic conservatism. That the assailants remain ‘unidentified’ is the covering up of the crime.”
"We need a law against transphobic hate"
Transphobic hate attacks have been increasing lately. In a new attack, on Saturday, October 18, 2014, a trans woman, Aylin, was stabbed in Tarlabaşı, Istanbul.
Police did not intervene against the assailants
Aylin was wounded in the back during the attack, which happened around 9 or 10pm.  “Unidentified persons” got out of a car and attacked Aylin with a knife. The lack of action by the police against the assailants drew attention.
Following the stabbing, Aylin was also assaulted by shopkeepers nearby.  She was subsequently taken to Şişli Etfal Hospital and returned home the same night after having her wounds treated.
“The increase in attacks is related to the government’s policies”
Lawyer Levent Pişkin, who went to the hospital to provide legal support, evaluated the increasing attacks for Kaos GL.  According to Pişkin, who believes that the attacks are directly related to the Islamic conservatism, the government’s policies are inciting the attacks. Pişkin criticized the AKP government for not taking any steps regarding hate crimes against LGBTI individuals and for not including the terms gender identity and sexual orientation in the Hate Crimes code.
“The political opposition perceives LGBTI rights as secondary”
Pişkin, who argued that the opposition parties are “guilty” for the attacks too, said “Opoosition parties also perceive the LGBTI issue [sic] as a secondary issue.  Other agendas always take [precedence] over the LGBTI agenda.  As long as this situation persists, an active struggle against hate crimes is impossible. Oppositional parties urgently need to initiate active and efficient projects on the right to life and other rights.”
“Unidentified persons?”
Lately, a similar pattern has emerged in transphobic attacks in Şişli and Beyoğlu. The assailants attack after getting out of a car and disappear shortly after. The assailants remain “unidentified.”
Pişkin stated the following regarding this pattern:
“Following the attacks, the assailants are reported as ‘unidentified.’[1] This is part of the state’s extermination policy. This is called covering up the crime! You take such extensive security measures, and then argue that the assailants could not be found in transphobic attacks. This is unbelievable! This situation has only one explanation: the crime is being covered up!”
[1] During the 1990s, Turkey pursued a politics of extermination against Kurds in Turkey. (Seehttp://www.hrw.org/news/2012/09/03/turkey-end-impunity-state-killings-disappearances ) This policy included not only the systematic burning of Kurdish villages but also political assassinations and kidnappings. (Source: http://bianet.org/bianet/ifade-ozgurlugu/142682-birinin-kaybedilmesiyle-basliyor-her-sey , link in Turkish) Both the  discourse of “unidentified persons” and the use of unmarked cars (by Turkish security forces during these illegal activities) were the trademarks of the political  assassinations and kidnappings (i.e. forced disappearance) of that era.  (For more information, please see the Wikipedia articles on the Deep State (https://en.wikipedia.org/wiki/Deep_state ) and the Turkish “Kontrgerilla” (https://en.wikipedia.org/wiki/Counter-Guerrilla ).) Turkey remains unresponsive to requests of accountability and for reparations and has not signed the UN’s International Convention for the Protection of All Persons from Enforced Disappearance. (Source: http://hypotheses.org/59391, link in French) It is possible that Mr. Pişkin is referencing aforementioned policy and implying that a similar policy against LGBTI groups in Turkey is in its initial stage.