Argentina takes another step forward for freedom and sexual equality by becoming the first country to pass a marriage law for foreigners. 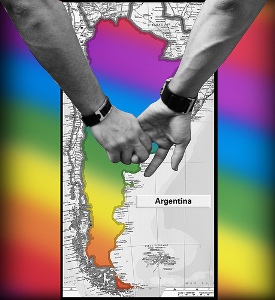 Argentina takes another step forward for freedom and sexual equality by becoming the first country to pass a marriage law for foreigners.
From now on, any foreigner wishing to marry in Argentina can do so under full legal validity and protection.
Passports, temporary residence permits, and some routine analyses are all that is needed to get married in the provinces of Buenos Aires, Tierra del Fuego and Santa Fe. Thus, only in a few days, two tourists can get an appointment at the civil registry and wed without major complications. The first ones to take advantage of this new law were a male couple from Australia.
Following the equal marriage law and the recently approved law on gender identity, Argentina keeps progressing towards legal equality of LGBTs. “Many organizations have been working diligently for the past several years to see these changes in our country, and we assist the social and political realities which encourage these developments”, Maria Rachid from the board of directors of the Argentine LGBT Federation stated.
No other country in Latin America, with the exception of Mexico City, has adopted an equal marriage law. According to Rachid, “Argentina is the only country in the world that open its doors to foreigners who wish to join in matrimony regardless of gender, and we are very proud of that”.
Source: Radio Nederlan Wereldomroep