Att. Kara: They detained us with handcuffs even though we said we were attorneys

Att. Hayriye Kara of Kaos GL, who was detained at the demonstrations in Ankara held to support Boğaziçi: "Even though we said we were attorneys, the police pushed us, kicked a colleague on the ground, handcuffed and detained us." 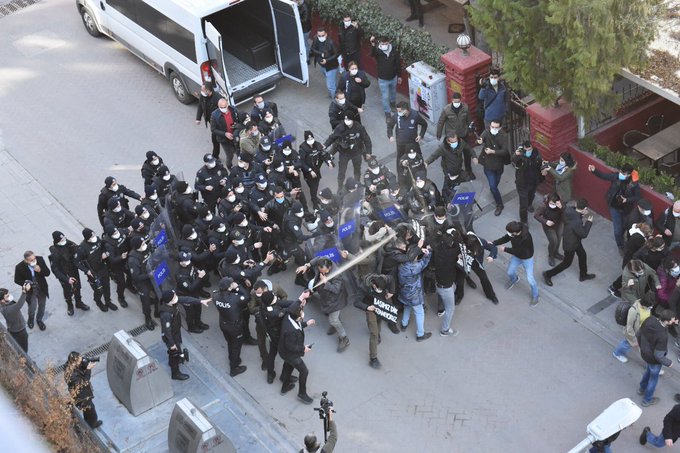 The police blockaded those who gathered in front of the Çankaya Municipality building, blocked the side streets and detained many people who wanted to enter the area. The police handcuffed the hands of detainees on their backs and laid them on the ground.

The police later attacked another group on Tunalı Hilmi Street of Ankara, who wanted to protest the detentions around the Çankaya Municipality building and to support Boğaziçi. The police detained many people there too, laid the people with rear-handcuffs on the ground.

Att. Kara told KaosGL.org about their detention and what happened in the protest:

"While we were waiting in front of the Çankaya Municipality, we were detained even before the protest started. They pushed us and said 'move along'. Even though we said we were attorneys, they pushed us from behind. The police started beating another attorney, kicked the attorney on the ground. We also tried to intervene. We said we were trying to do our job, that we were attorneys. They still continue to detain us. We were kept in handcuffs for about two and a half hours until the medical check. There was also a student who was detained with us. They handcuffed the student's hands on the rear at first, but handcuffed them normally upon our objection."