Peace and Democracy Party (BDP) MP from the district of Agri has made an inquiry on Avsa’s, a trans prisoner on hunger strike, condition to the Minister of Justice. 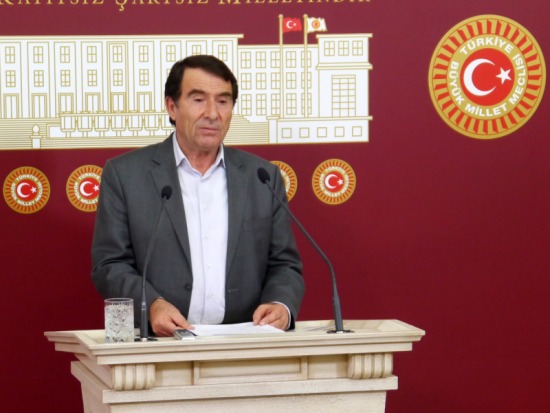 Peace and Democracy Party (BDP) MP from the district of Agri has made an inquiry on Avsa’s, a trans prisoner on hunger strike, condition to the Minister of Justice.
Halil Aksoy, a Peace and Democracy Party (BDP) MP from Agri, has submitted a query to the Minister of Justice, Bekir Bozdag, on the situation of Avsa Erkusan, a trans convict who has repeatedly been subjected to sexual harassment and assault in various prisons during her sentence and who, for the past two months, has been on a hunger strike.
Aksoy, after expressing that several human rights infringements remain in correctional institutions, mentioned that trans inmates in Bafra T-type Prison had started a hunger strike after many rights violations and sexual assaults.
Kaos GL News Report Led Aksoy to Voice the Issue in Parliament
Aksoy, who was made aware of the situation only after kaosGL.org reported on Avsa Erkusan’s letter, stated that Erkusan had been sexually abused around 2009, during her time in the Giresun Correctional Institution by a correctional officer who worked there.
Aksoy reminded the Minister of the following items on the kaosGL.org news report:
“Erkusan is later transferred to Tokat Correctional Facility citing safety concerns. The harassment and abuse continue and Erkusan is later relocated to Nigde, Gumushane and Bafra prisons consecutively. In Bafra, she is again subjected to sexual assault and violence by another correctional officer. Following the beating she took from the said officer, she is not taken to hospital but only received basic treatment at the treatment infirmary. Later, after passing out the same day, she is rushed to Bafra Government Hospital, where she is treated and a detailed report is issued.”
Aksoy submitted the following questions to Minister Bozdag concerning trans inmate’s situation:
“- Is the Ministry aware of the incidents of sexual harassment and violence taking place in Bafra T-type Prison?”
“- Has the officer associated with the sexual and physical assault on trans inmate Tolga Erkusan [Avsa’s male name] been investigated and/or reprimanded by the administration?”
“- Have any guilty parties been identified for the sexual harassment and violence on the trans inmates in Bafra T-type Prison? If so, has there been any disciplinary action and/or investigation against these parties? Does the Ministry have any policies or programs in place that would serve to prevent such occurrences of sexual and physical abuse on inmates because of their sexual orientations?”
“- What is the medical condition of Tolga Erkusan, the inmate on hunger strike? Is he undergoing medical treatment? How many inmates are on hunger strike in Bafra T-type Prison as of now? Have any of their demands been met?”
Translation: LGBTI News Turkey
Related news:
Trans Inmate on Hunger Strike: I Do Not Want to Die!