In the second day of 12th Anti-Homophobia Meeting, feminist academics and their students were brought together. 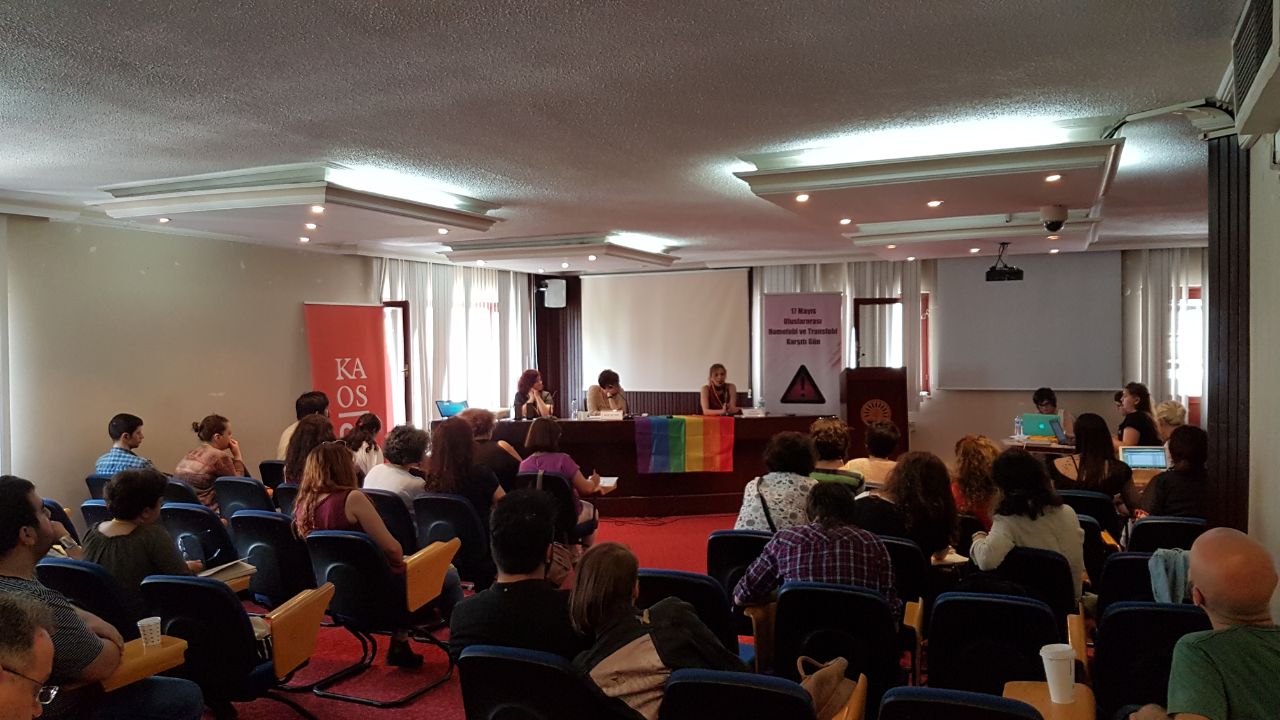 In the second day of 12th Anti-Homophobia Meeting, feminist academics and their students were brought together to share their experiences after statutory decrees, and to discuss the further steps.

Anti-Homophobia Meeting continued with Academics Forum at 14th May where feminist academics dismissed from universities and their student who had to suspend their academic studies gathered together to discuss the current situation after statutory decrees and the ways out from the current process. The forum bringing academics and students from 18 different universities together started with Melek Göregenli’s opening speech.

During the opening speech, Göregenli said: “While Kaos GL was established with the motto of ‘the liberation of homosexuals will also free heterosexuals’, they had not only created their environment, but they had coordinated sexual orientation and gender identity axis with gender. They have always been in contact with social movements and the feminist movement as well.”

Funda Başaran: “During the dismissal process, I realized that I had not known to demand before”

“We have been passing through a devastating process in which we cannot say that we got over it easily even if we seem to be waiting. When we look at the signatories, we see that they are mostly women, so I think that it means something. Although we have acted together during this chaos, all of us, as women academics, have lived different processes.

“When I first started, I was thinking that academy is less ‘genderless’ than private sector, but then I saw that this is also not true. During my whole academic life, I had tried to make a ‘strong woman’ image that I had not demanded anything from anyone. Then during my dismissal process, I realized that I need to demand, but I had not known how to demand before.”

Ece Öztan: “It’s not a coincidence that we were dismissed together with the ones we had close contact“

“During this storminess we need to create safe spaces. Ratio of women in academy is %47 which is quiet serious ratio. The majority of those women, who were dismissed due to whether Peace Declaration or statutory decrees, are the ones who are working or studying on gender. If I was dismissed together with my professors and my students at the same time, this is not a coincidence.”

After Göregenli, Öztan and Başaran’s speeches, academics coming from different universities took the stage one by one to share their experiences.

Hafize Öztürk dismissed from Akdeniz University Medicine Faculty on November 22 told about her working experience after her dismissal. Mentioning medical ethics in her field, Öztürk emphasized that she had to struggle with the opportunist attitude of private sector after her dismissal.

Süreyya Karacabey dismissed from Ankara University stated that things got crazy in Turkey and she even does not want to work anymore.

“I don't want to work in a corporate job anymore because the one I started idealistically returned back to me in a very offensive way. However, there is no need to sorrow so much; that is, people can be starving, but no matter what we want to survive at the end. Maybe we should just overcome/ deal with our greed/ arrogance/ selfishness, get used to do with less, and continue struggling. In this respect, after the moment whoever would be situated themselves against the government, I will be with them.”

Derya Keskin dismissed from Kocaeli University started her speech by mentioning that she is coming from such a university where during 8 of March celebrations people could only discuss ‘motherhood’, and where women’s studies is tried to exist in this environment.

“We were working on a harassment regulation for our university, but unfortunately we were dismissed before completing it. However, we are still trying to keep our contact with the city. Continue struggling!”

Ceren Akçabay: “We were dismissed as six people in total, three of them are feminist women”

Ceren Akçabay dismissed from Marmara University stated that she headed for gender studies during and after her PhD level, then she was oppressed in both her department and her faculty. Adding that gender studies are always regarded as ‘radical’ and ‘nonsense’, Akçabay said: “We were dismissed as six people in total. And I can proudly say that three of those six people are women from feminist women.” At the end of her speech, Akçabay emphasized that continue to work is so important for her and in order to prevent marginalization solidarity is so vital.

Dilek Özhan Koçak: “I realized that I had faced with a pure evil”

Dilek Özhan Koçak dismissed from Giresun University told about her investigation and suspension process. Stating that everyone dismissed by statutory decress had encountered with big proglems, Koçak also gave examples of the lynch campaigns against them.

After she read the hate speeches, messages, tweets about her, she told: “I realized that I had faced with a pure evil”. Pointing out that after she started to work she saw the real face of Academy that she had idealized before, Koçak underlined that to make people live they have become politicized.

Starting her speech that when she was dismissed from Ankara University, she was a research assistant on PhD level, Nisan Kuyucu stated that after dismissal she lost her ‘academic’ status, so it’s not possible for her to benefit from international scholarships anymore. Then Kuyucu told that it’s now hard to live independent from her family, and this process is when there is a great need for solidarity and socialization.

Esengül Ayyıldız: “There is a powerful system that make us alienate from ourselves”

Esengül Ayyıldız dismissed from Çukurova University told that after statutory decrees she felt intensely that there is a powerful system breaking off their relation with themselves, and in this system they have to fight for their survival. At the end of her speech, “Maybe after that we should discuss how we rebuilt peace again” said Ayyıldız.

Nevcan Demir: “I was not surprised by dismissals”

Özlem Şendeniz: “I was not ready for this politically”

Telling her dismissal process from Iğdır University, Özlem Şendeniz pointed out that she was not ready for this politically because she signed the declaration without thinking its results. She ended her speech that she is expecting the further process as more instructive and helpful.

After academics, their students whose thesis or academic studies had to be suspended because of the dismissals told their stories during ‘Students Forum’ with the moderation of Aysun Gezen and Hande Dönmez.