HIV, old age and rights violations have been discussed at May 17"s "HIV and Elderly LGBTI+'s" education. 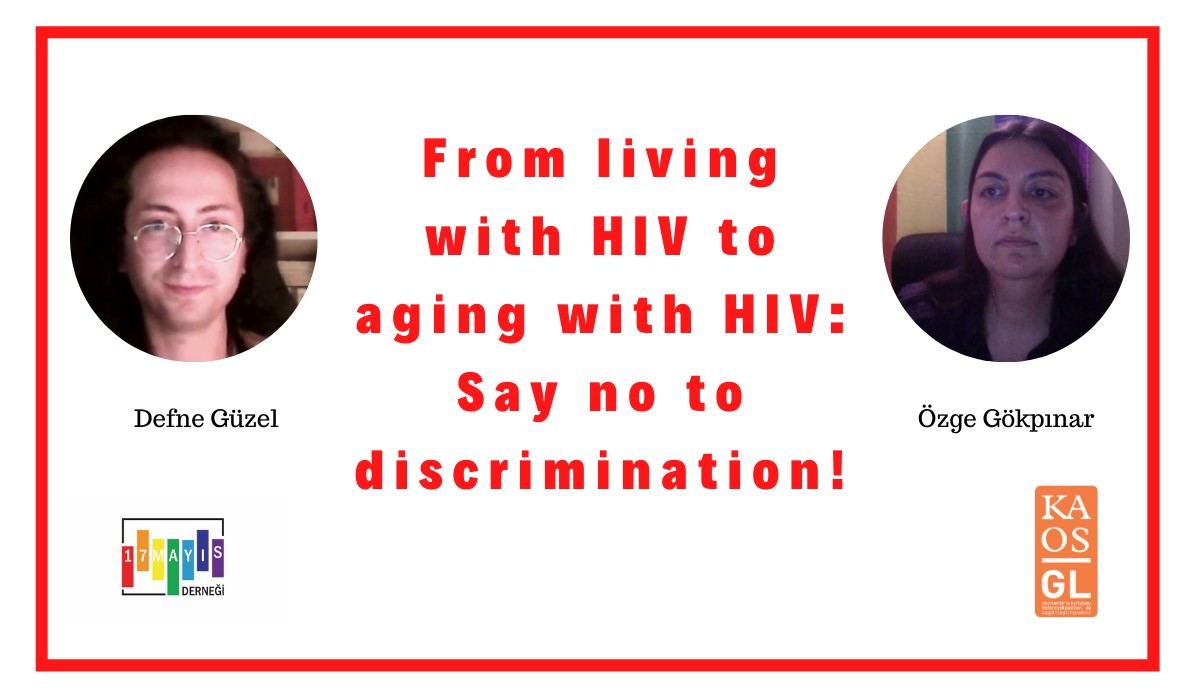 The May 17 Association's "HIV and Elderly LGBTI+'s" online training was held at September 28th. The training, which was attended by around 40 people from different professions, is the first in a series of events under the association's "Elderly LGBTI+s" project.

At the event, project coordinator Özge Gökpınar from the May 17 Association conveyed information on the work of the May 17 Association and the 40+ LGBTI+ Working Group, good examples from around the world, studies conducted in Turkey, problems and solution proposals regarding the elderly LGBTI+'s, the fundamental rights of people living with HIV and elderly LGBTI+'s under the legal system of Turkey, and the test centers in Turkey.

Gökpınar said, "As an association, we also participated in the "Stakeholder Workshop on HIV and Discrimination" after reminding that the first activity of May 17 Association within the scope of HIV/AIDS studies was to participate in the conference "Living Politics: Remembering HIV/AIDS Activism Tomorrow" of the EUROPACH project held in Berlin, Germany in September 2019. After these two events, we decided to focus on HIV not only within the scope of a right to health but as a matter of equal citizenship”.

Speaking about their research on the situation of elderly LGBTI+'s, Gökpınar said, “We encountered a series of problems during our research. Ignoring the sexuality of elderly LGBTI+'s causes problems in their access to health services. There is work that needs to be done to minimize discrimination in the current health system”.

Güzel said HIV and AIDS are being used as a scare tool, adding that people living with HIV have been discriminated against in the past and today:

“People living with HIV are isolated, stigmatized, HIV is seen as a dirty thing and pushed out of society in a desire to create a sterile society. Scientific advances are deliberately and willingly being ignored. HIV is not a crisis, but those living with HIV are in the midst of a social crisis. Those living with HIV today need social support as well as treatment. It is important to set up safe spaces where they can be opened at any time while establishing mechanisms to prevent the breaches of privacy that we often encounter.”

“And in the world, we're going from living with HIV to aging with HIV. People living with HIV can't stay at nursing homes as required by regulation. On the one hand, we know that LGBTI+'s have difficulty accessing home care when they get older as they are not part of the cis-hetero family order. Elderly LGBTI+'s that are living with HIV cannot access care services due to financial difficulties, family-based social services, and care services. In the meantime, there's a problem with loneliness and isolation.”

“Discrimination reminds us that we are living with HIV”

Finally, Defne Güzel talked about May 17 and Kaos GL Associations' ongoing research on the human rights of LGBTI's living with HIV. Güzel, who conveyed the process of the project in which they are a researcher, said they carried out a qualitative study. Reminding that they had in-depth interviews with ten LGBTI+'s who are living with HIV, Güzel said, "We chose a research method where participants could tell their own stories as well as their experiences of rights violations they were subjected to”.

Güzel also said that the report will be published soon, summarizing the main findings as follows:

"In our interviews with our participants, while protecting their privacy, we found that LGBTI+'s living with HIV lack mechanisms to explain themselves and report the human rights violations they experienced.

"On the other hand, there are serious shortcomings in the point of perceiving human rights violations as violations.

"The LGBTI+'s living with HIV have also shared their criticisms against both HIV organizations and LGBTI+ organizations. They said there were problems with their representation and taking their problems into the agenda.

"Lastly, a large number of our participants said that they forget that they are living with HIV in their daily lives, but were often reminded by the discrimination."

Stay tuned for other workshops!

The May 17 Association will organize 6 more online workshops on issues such as law, intergenerational communication, solidarity and life cooperatives, old age - civil society & old age studies, social work in the context of human rights. Announcements of these events will be posted on KaosGL.org a week before the events and on the social media accounts of The May 17 Association of and Kırkındansonralubunya(Queer after 40).