In 2021, Furkan Öztekin, Şafak Şule Kemancı and Asya Leman were invited as guest artists at the Artist Residency Home. 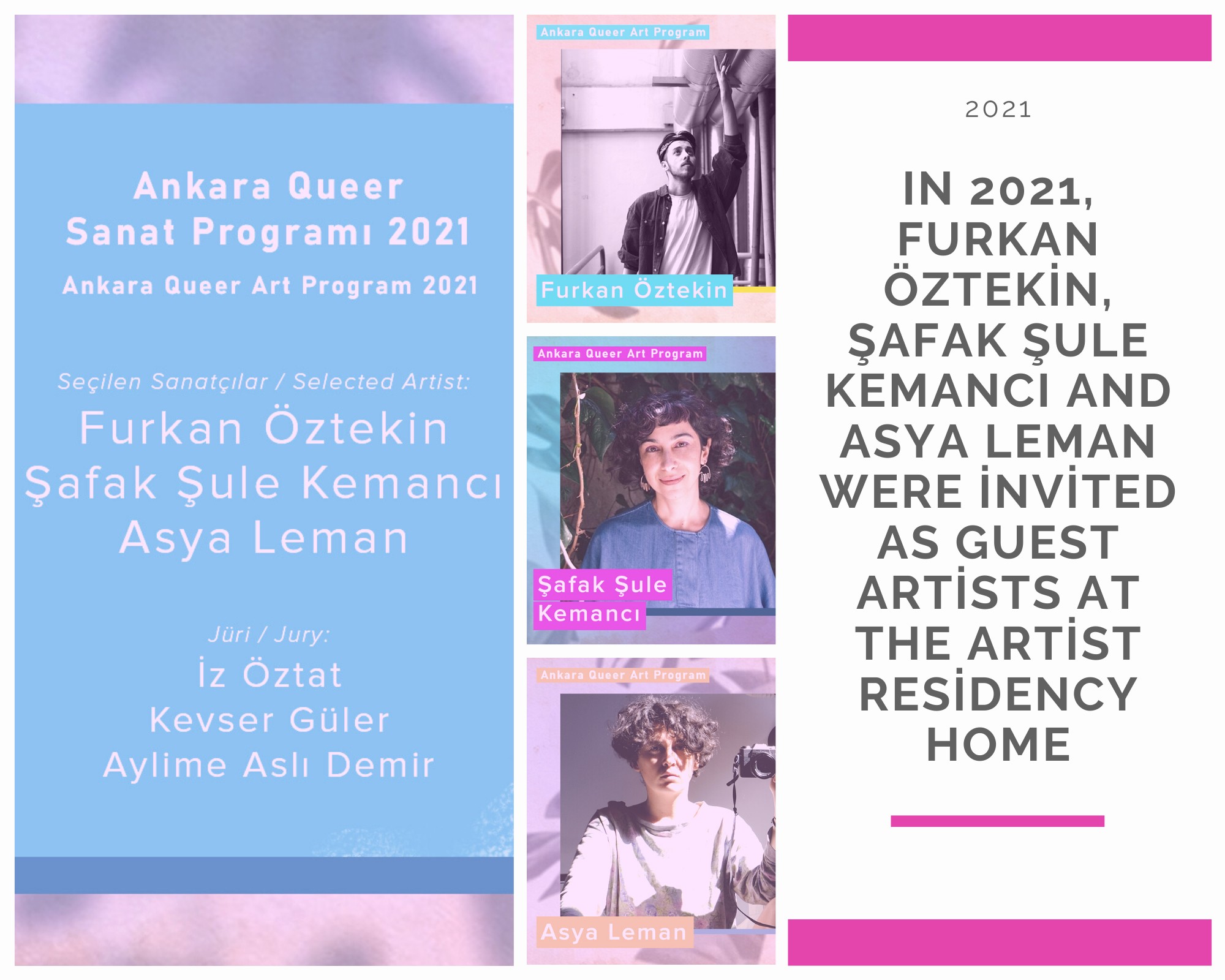 Focusing on the queer potential of artistic expression, Ankara Queer Art Program, continues to support artists in 2021 as well. In 2021, Furkan Öztekin, Şafak Şule Kemancı and Asya Leman were invited as guest artists at the Artist Residency Home of which the selection committee were Aylime Aslı Demir İz Öztat, Kevser Güler and Aylime Aslı Demir.

The program, which provides accommodation for the invited artists for 2 months to develop their collaboration in Ankara and also covers the travel & living expenses and production costs of the work & projects of the artists. Through its advisor committee, it also organizes workshops to support the research processes of artists.

Furkan Öztekin (d. 1993) graduated from the Painting Department at Dokuz Eylül University Faculty of Fine Arts and completed his postgraduate studies at Namık Kemal University Institute of Social Sciences, Department of Painting. He was among the participants of Istanbul Biennial Production and Research Pogramme (2018-2019) & Arter Research Programme (2020-2021). He has participated in various group exhibitions and competitions including Akbank Contemporary Artists Prize Exhibition (2015); Young Fresh Different, Gallery Zilberman (2016); Colony, Abud Efendi Mansion / Schwules Museum (2017-2018); Positive Space, Operation Room (2018); Four Seasons In May, Mixer (2019); Internal/External, Simbart Projects (2021). Öztekin re-interprets the notion of space through the axis of silence, emptiness, time, limits and rhythm. Informed by LGBTI+ activism in his works, the artist reinterprets document-based historical narratives on spaces of resistance and memory through the lens of his artistic practice.

In Şafak's works, an intense effort makes an appearance right at the point where the consciousness flows and the mind exposes itself to a performative process. Repeating patterns, textures, figures, and pieces are fluently brought together. It is possible to associate this coming together of repetitions with the plants recurrently blooming in the queer ecosystem to which artist’s gaze has been turned for a long time.

Having studied textile design at Central Saint Martins College of Art and Design in London, Şafak received her master's degree in fine art at Goldsmiths University of London. Her works have been exhibited in various venues in Istanbul, London, and San Francisco.

Asya Leman is an activist and visual artist based in Istanbul. She received her bachelor’s degree in Photography and Video, and her master’s degree in Radio, Television and Film from İstanbul Bilgi University.

She has been producing activist videos and undertaking independent projects in collaboration with non-governmental organizations since 2015.

She was the project manager of the Film Activism Workshop held in Istanbul and Gothenburg between 2017-2018 by SPoD and Swedish Feminist School Kvinnofolkhögskolan.

With her docufiction short film Hükmü Yok produced in 2018, she became interested in constructing visual narratives against the masculine domination of the state through bureaucracy. She focused in her works on the performativity of the bureaucratic ways of classifying the society as well as on confrontations where concepts of identity, gender, and spatiality intersect.

She contributed a video work to "Aşikar Sır”, the exhibition held at Karşı Art Gallery in 2019 by Hakikat Adalet Hafıza Merkezi [Truth Justice Memory Center] as part of the International Week of Struggle Against Disappearances in Custody.

In 2020, she became engaged with TAPA (Transformative Art Project for Activists) project organized by independent activists and artists, and exhibited her installation “Aile Cüzdanı” in TAPA exhibition held in Barınhan between December 2020 and January 2021.

Asya usually places herself in the foreground of her imaginative works inspired by her personal experiences. Drawing on documents, images and objects from her personal history, she experiments with creating narratives that offer an inverted version of the lived experience. She produces her works usually with analog tools or techniques of a specific craft.

In the beginning of 2021, she founded a video production studio called Lub 28 where she collaborates with queer artists from different disciplines. In this project, she dreams together with queer artists, and works to make dreams come true.

İz Öztat’s practice engages with diverse forms and media defined by her research. She continues her individual and collective artistic practice focusing on the return of the suppressed past in the present, tracing what is absent and negotiating official narratives through the possibilities of fiction. Her writings on contemporary art and fictional texts have been published in various media. Öztat participated in artist residency programmes in Amman, Berlin, London, Madrid, Mexico City, Oslo, Paris and Yerevan. She was a lecturer at Kadir Has University Fine Arts Faculty from 2009 to 2011 and a visiting lecturer at Oberlin College Visual Arts Department in the 2016–2017 academic year. She contributed to initiatives that support artistic research and to attempts at self-organisation in the contemporary art context.