Hande Buse Şeker hasn't been maltreated and sexually assaulted, according to the prosecutor! 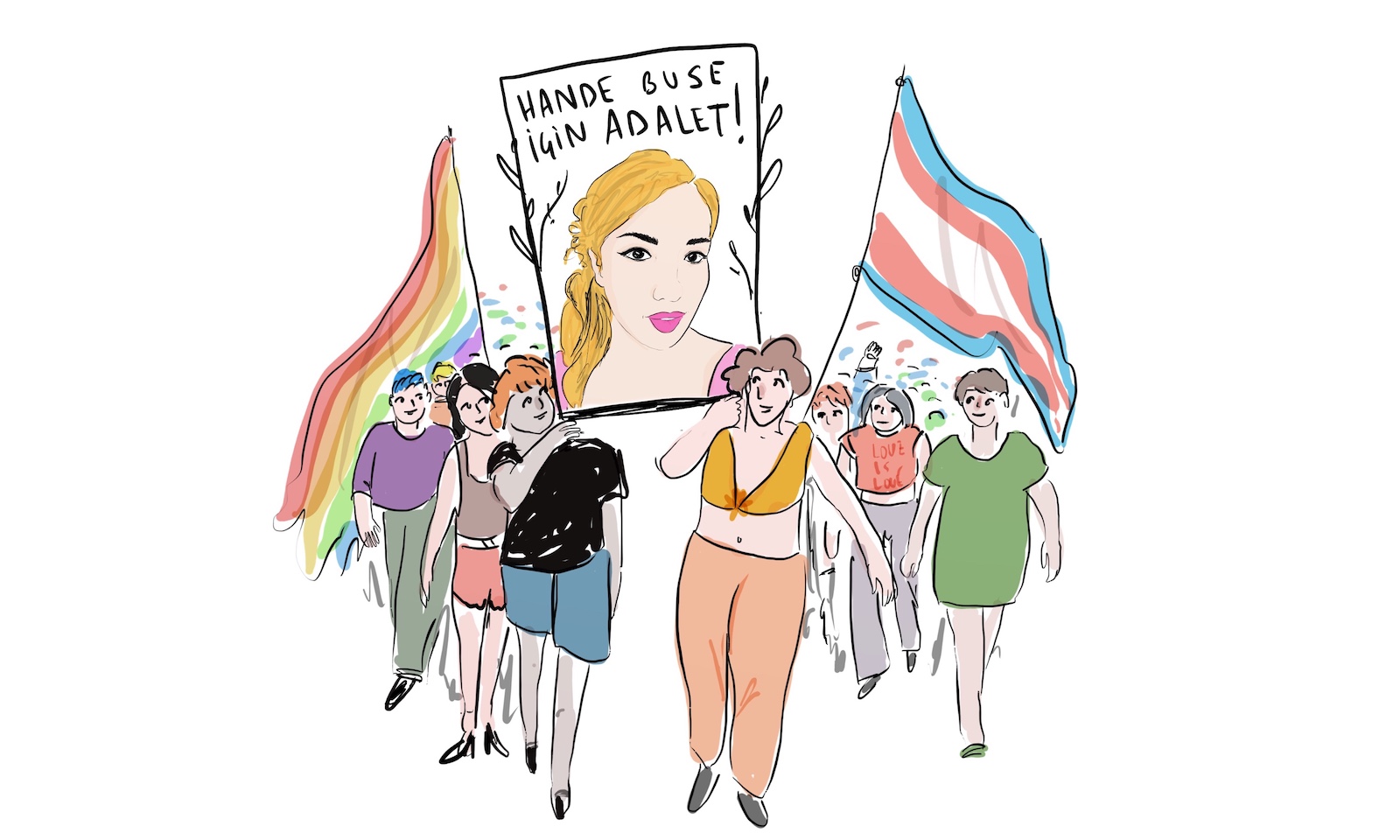 The seventh hearing of the trial of trans woman sex worker Hande Buse Şeker who have been murdered last year, was held at the 4th High Penal Court of İzmir on September 28.

At the trial, the prosecutor presented their legal opinion and asked that Volkan Hicret, the police officer who killed Hande Buse Şeker, to be sentenced for intentional murder, qualified looting, qualified sexual assault to another trans woman who was at home at the time, and actual bodily harm. The lawyers asked for time to make a statement on the case. The hearing was adjourned until 10.40 am on November 26. This hearing is expected to be the final judgment hearing.

The Ministry of Family, Labour, and Social Services also attended the hearing. The ministry said they would make a written statement regarding the trial as one of the participants in the case.

The maltreatment in the surveillance footage is not included in the opinion!

The prosecutor's office didn't see the obvious torture that can be seen in the surveillance footage. Instead of qualified intentional murder, they asked the punishment for intentional murder. On the other hand, Volkan Hicret sexually assaulted both Hande Buse Şeker and another trans woman who was at the same home at the time, but the prosecutor only asked punishment for the sexual assault that was committed against the Şeker's friend.

"The prosecutor asked for the sentence for the intentional murder of Hande Buse, but we, as lawyers, have been pressing for qualified intentional murder since the beginning of the trial. Because as the CCTV footage clearly shows, there's an act of murder with torture and monstrous intent. After targeting the places where he could injure, he waits there for a long time while Buse is injured and then fires his weapon again, numerous times. He then sexually assaults her while she's injured. This completely complies with the legal description of brutality. Supreme Court rulings also say that this quality has occurred. We think it's political to overlook it. If it wasn't for the camera footage, they would even be objecting to the intentional murder. There's footage that covers every single moment. It is possible that they could issue a lighter sentence by avoiding to call the crime as qualified. It is also possible to consider that the victim was killed because of her identity. It is legally required to consider such brutal actions and the purpose of torture. Another problem is that although Hande Buse Şeker was sexually assaulted while she was injured before she died, there is no charge for sexual assault against her. A charge is being pressed for sexual assault against another trans woman who was also there. Prosecutor ignores sexual assault on Hande Buse Şeker."

On the accusal, off the legal opinion!

Kerem Dikmen, one of Şeker's lawyers, reminded that the defendant had committed more than one hate crime, and continued:

"The defendant had committed more than one hate crime. One of them was the looting of other women at the place where Hande Buse was murdered, we pressed charges for that. Again, there was an act of rape against a female friend who was using the same house as Hande Buse at the time of the incident, and charges pressed for that. There was also the rape of Hande Buse both just before she died and right after, to her lifeless body. The prosecution took it not as rape, but as an insult to the memory of the dead during the indictment phase. However, interestingly, the prosecutor's office did not define it as an insult to the memory of the dead in their submitted opinion. So it comes to the conclusion that, according to the prosecutor's office, the murderer, acted on the assumption that Hande Buse was not dead during the rape. And that's supposed to bring us to the qualified aspect of the intentional murder, as rape is a torturous element in the murder of Hande Buse. It just so happens that the prosecution, which supposes death did not occur during the rape, also called her death as a 'simple intentional murder'."

"There is no difference between torturing and raping to death and simple murder, according to the prosecutor"

"It's hard for us lawyers to explain this in technical words, but that's the way it is. To put it in everyday language, according to the prosecutor's office, there is no difference between the murder of Hande Buse Şeker, which involves tormenting her in her home, rape, wounding her in the chest and watching her die and after a while shooting her in the head area and simple, common murder. Raping her while she was dying, torturing her with gunshots that took place at two different times makes no difference at all. That's why I don't think the prosecutor's opinion disgruntled the defendant. But the verdict has not yet been decided, and we will do whatever it takes to get the sentence to the upper limit."

A lawsuit has been commenced against the murderer cop Volkan Hicret at the 4th High Penal Court of İzmir. The case was closed to the public for a while. The decision of secrecy was lifted after lawyers objected and reacted.

It became difficult for the public to monitor the trial where most of it was heard closed to the public, the participation request of the Young LGBTI+ Association and Amnesty International's request to observe the case was rejected on the grounds of closedness and after the trial has been opened to the public due to the coronavirus pandemic.