How to ‘pass’ police tests in Istanbul LGBTI+ Pride March

People who have passed the police’s ‘LGBTI+ test’ on Pride March, those who failed it, and those who’ll stay for summer classes tell their stories to Kaos GL. 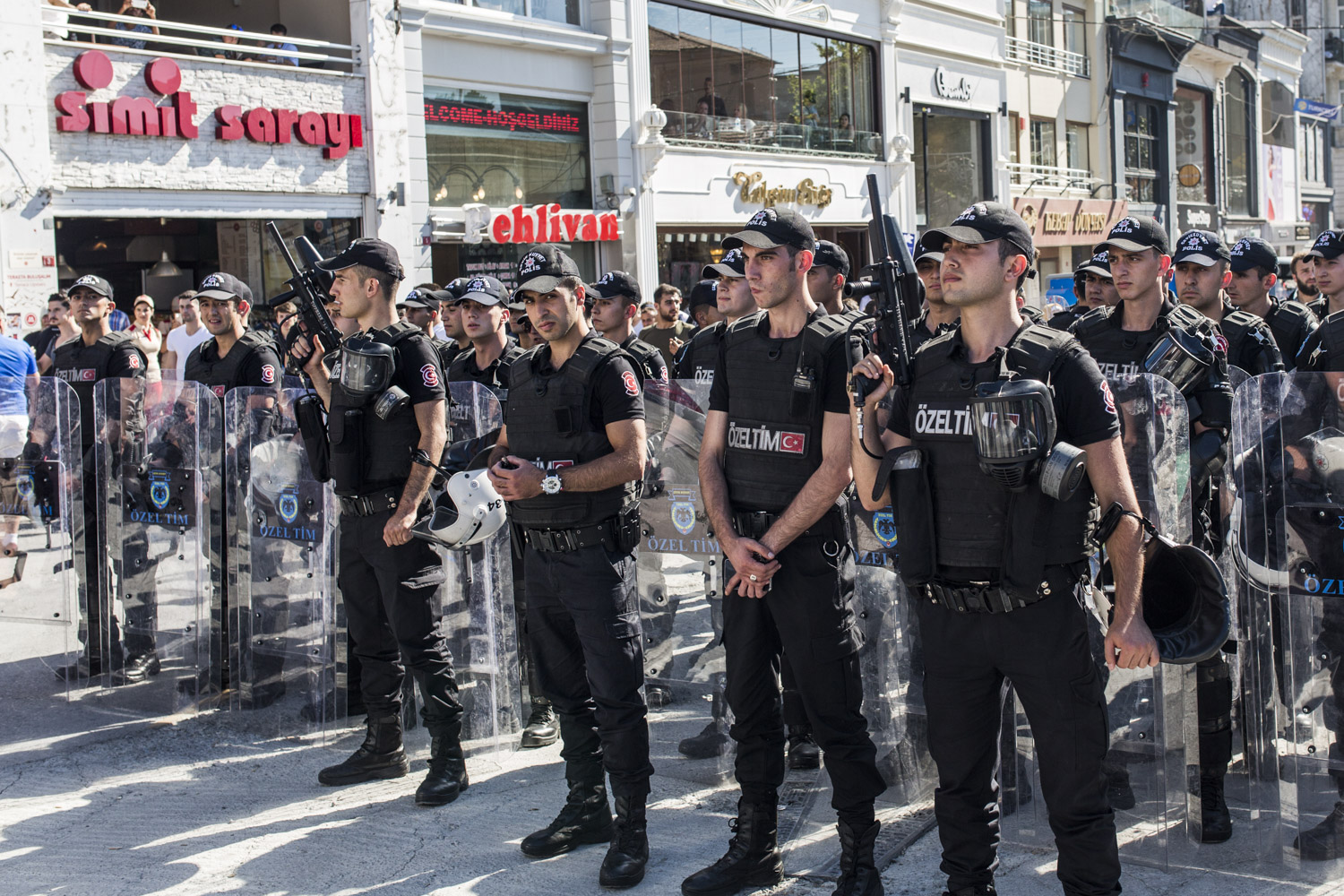 Tote bag, badge, colorful shirt, earring, scarf, sometimes tshirt, sometimes shorts, and sometimes only the way you look is enough! People who have passed the police’s “LGBTI+ test” on Pride March, those who failed it, and those who’ll stay for summer classes tell their stories to Kaos GL.

Our country launches a new practice and people who wanted to attend the LGBTI+ Pride March had to compete to “pass.”

Police blockaded the whole Taksim area the day of the march and allowed people to enter Istiklal Avenue based on their “types” throughout the day, leading to farcical dialogues. Police forced a person wearing a rainbow pattern to strip, said “normal people can pass,” among so many others.

“I got in by hiding my shirt with my backpack”

Cüneyt is one of the lucky few who managed to pass through the police checkpoint. How he did that is like a summary of the day:

“Police saw the rainbow on my t-shirt and said on the police radio ‘it’s clear you’re supporting them [LGBTI+] through your t-shirt’. So I wore my backpack on the front and passed.

Another tactic to pass the police checkpoint is to stand together with both sexes. Most probably as a result of the police’s not knowing about bisexuality, varied sexuality and gender possibilities, and even more so about the fact that people attending this march can be heterosexual, Gülay was able to pass the checkpoint easily:

“I passed hand in hand with Barbaros. They did not say anything like ‘Maybe they are bisexual, maybe they are here for the march.’ So we entered freely.”

“As I’d entered [Taksim] in the morning, I was already in when the police cordoned the area off and started to choose people as they like. But in order to be able to report, I spent the whole day trying to look like a straight couple with a lubunya friend of mine, ignoring our friends we passed by. This way I was able to shoot certain cases of police violence and detention. And I was able to take a lubunya friend of mine to Istiklal, who was otherwise rejected by the police, telling him “come my love”.

Ask them about the colorful shirts

“We were three people and we were stopped by the police right at the entrance to Istiklal. Bedreddin was stopped because he was wearing a colorful shirt. Yes, this was precisely their justification. He said ‘it’s a color sensitive situation, you can’t enter Istiklal’. So after listening to the political defense for a while, I realized he won’t understand. I simply said: ‘What’s that got to do with anything, there is no green in rainbow.’ And the police opened the cordon.”

“We sat for a while at a venue on the entrance to Istiklal. Then a friend of ours passed by and entered [through the police cordon]. As we tried to go after him, a police officer told another one ‘hold these guys’ and stopped us. I had a gray t-shirt, earrings and an orange bag on. So we went through Cihangir and entered the avenue from Galatasaray.”

“We were able to enter after hiding our stuff”

“My girlfriend and I came through nostalgic funicular from Karaköy. We were not allowed in Istiklal because of our earrings, bandanas and pins. ‘We are here on Eid al-Fitr, don’t bother us with this’ they said. We said ‘we won’t give them [the accessories]’. I said : ‘If I give them to you here, I will buy new ones from the shops on Istiklal anyway. They replied, ‘Then our friends will detain you and that’s it’. We said we won’t give them. They said ‘then we won’t take them’. We went back to Karaköy. We put all the stuff they didn’t allow in my girlfriend’s sunglasses case and left it on a construction site. We hid it. That’s how we went to Istiklal. We returned and took back our stuff afterwards.

“Your type is not allowed”

Başak’s dialogue with the police

-Why, is it just me who is not allowed?

-No, you and your friends.

-Your type is not allowed!”

Shoulder bag is a reason for not being allowed!

“Five of us entered Istiklal. Our outfits were more or less similar. We all had a casual t-shirt and shorts. Only one of my friends and I had a shoulder bag and we were the only ones that were stopped. It was either the bag or us being too campy, I don’t know. After that I was rejected several times on my own.”

“They stopped me. I asked, ‘Why can’t I pass, look, everyone else is in’. The police said ‘They’re normal’. I snapped like a princess. Eventually they said ‘please come in’.”

“The street is closed to you today”

“They didn’t let me in either. They stopped me right when I was entering the avenue and said ‘The street is closed to you today’. I asked ‘Who is we’ and they replied ‘LGBTI’. When I told them that I don’t understand, they said ‘Don’t understand, just move along’.

“My ID doesn’t say that I’m a faggot”

Ekin: “We had pins that read ‘peace’. They said ‘Take them off, or you won’t get in’. When we said ‘It just says peace, we won’t take them off’, he asked for my ID. When told them that my ID doesn’t say that I’m a faggot, they stared at us and made way. We walked chanting slogans. We were caught near Demirören. But then we ran away when they were about to detain us. 10 minutes later we were able to re-enter.”

All of this is just a small portion of what happened on the day of the march. There are even more tragic stories on the part of the iceberg that remains below the surface.