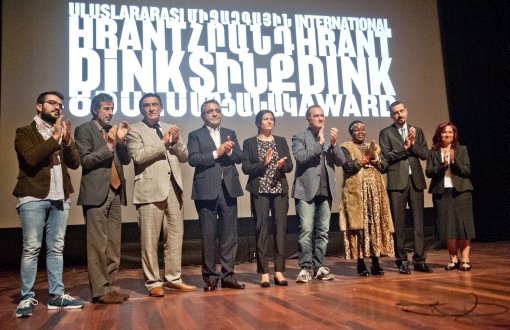 This year’s awards were granted to Diyarbakir Bar Association, a civil society organisation that works for human rights and rule of law for many years and to Theresa Kachindamoto, a tribal chief from Malawi who works for children’s human rights and education rights.

The award ceremony was hosted by Ece Dizdar and the opening speech was made by the Chairman of the International Hrant Dink Award Committee, Ahmet İnsel.

The award ceremony was opened with Mehmet Erdem’s performance of his song 'Hayat Bu'.

2016 awardees were announced at the end of the award ceremony. 2016 International Hrant Dink Award jury member, philosopher, Michel Marian and Yıldız Tar on behalf of the 2015 International Hrant Dink Award laureate Kaos GL presented the award to the 2016 International Hrant Dink Award laureate Theresa Kachindamoto; who has strived to overcome the economic difficulties that lead to early marriages in her country Malawi, by creating a fund to pay the tuition for daughters of poor families and encouraging efforts to strengthen children’s bonds to school life, and who has made tireless efforts that have changed the lives of so many young people. Theresa Kachindamoto in her speech, has said: "There is no doubt that I need to push against more of the old ways of thinking to achieve my ultimate goal of removing child marriage from Malawi, and giving all girls and boys the opportunity to complete their education… But we still have a lot of work to do, for which I am prepared."

The second laureate of the 2016 International Hrant Dink Award, has been Diyarbakir Bar Association, recognized for its impartiality, its sensitivity to human rights issues, its opposition to all manners of violence no matter who employs it or for what reason, for standing as a role-model in the region, for making constant and determined efforts to ensure effective investigation of human rights violations, its determined fight to prevent cases from being time-barred and to prevent impunity, for being able to use the language of peace at all times and never giving up its ideals for peace despite the heavy prices it had to pay. On behalf of the Diyarbakir Bar Association, Ahmet Özmen received the award from the 2016 International Hrant Dink Award jury members Murathan Mungan and Rakel Dink.

As part of the ceremony, the people and organisations from Turkey and from around the world, who raise hope for the future with their actions were saluted with the video ‘Inspirations 2016’. Among the inspirations of 2016 were Association of Bridging People from İzmir for supporting refugees to access their most fundamental human rights, in particular healthcare; Rana Choir from Israel formed by Jewish and Arab women for showing through their songs that coexistence is possible despite political differences and for voicing their call for peace in a multilingual manner; Ayse Celik, a teacher in Diyarbakır, for publicly sharing her message ‘Let people and children not die, let mothers not cry’, through a telephone connection in a television show which drew attention to the fighting and rights violations in Turkey’s East; a husband and wife Khalil Hasan and Ameena Saeed from Iraq for working to rescue Ezidi women kidnapped by ISIS; workers of Yeni Çeltek Mine in Amasya’s Suluova province for their resistance together with the support of their families against the closure of their mine, which paid off after more than a month’s effort; Wang Yan from China for spending his entire fortune to transform the slaughterhouse into a dog shelter and rescue centre; Academics for Peace from Turkey for their courageous and effective call thanks to their petition calling for an end to the violence and human rights violations taking place in the eastern provinces, which once again stressed the importance of freedom of expression in Turkey and News Watch journalists from İstanbul, Ankara and İzmir for gathering in the name of freedom of press and the right to accurate information in the eastern provinces, with their slogan ‘We seek the truth and support our colleagues’. During the award ceremony, all the people who acted and spoken against the coup-attempt on July 15th in support of democracy, and who lost their lives were also commemorated regardless of their political party, religion, language, gender.

After the Inspirations video and before the announcement of laurates, Bajar and Istanbul Mosaic Oriental Choir had a musical performance.

The award ceremony was broadcast live through www.hrantdink.org and www.hrantdinkodulu.org. Highlights of the ceremony were shared real-time in Turkish, English and Armenian through the Facebook and Twitter accounts of the Foundation and the award with the following #HrantDinkÖdülü, #HrantDinkAward, #ՀրանդՏինքՄրցանակ.