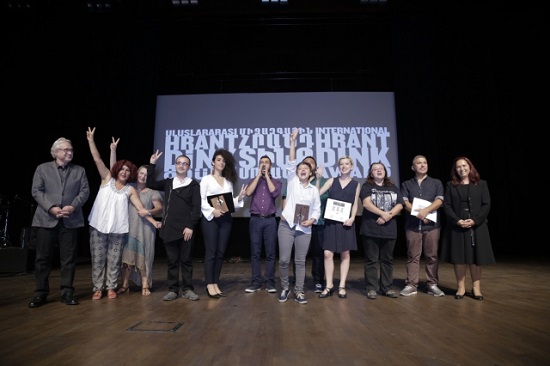 The seventh International Hrant Dink Award was presented on Tuesday, September 15th with an award ceremony held at the Istanbul Congress Center. This year’s awards were granted to women’s rights activist Samar Badawi from Saudi Arabia and to Kaos GL, an initiative that works for LGBT rights in Turkey.

Badawi stands out as a leading voice for advocating women’s rights and for raising international awareness about the oppression of human rights defenders in her country, while Kaos GL was recognised for its persistent and efficient struggle for LGBT rights in Turkey, where violence against lesbians, gays, bisexuals and trans individuals continues to increase.

The award ceremony was opened with Ceylan Ertem’s performance of Bülent Ortaçgil’s widely-acclaimed song, Bu Su Hiç Durmaz (This Water Will Never Stop Flowing). In his keynote address, historian Taner Akçam reminded that the conception of the legal terms "humanitarian law" and "crime against humanity" and the concomitant crime of genocide is directly related to Turkey’s past. He stressed the importance of facing the past to be able to give back the massacred people their dignity, to restore justice and conscience, and to overcome enmity, atrocity, and conflicts. He emphasized that confronting the Armenian Genocide in its centenary was one of the preconditions for the co-existence of peoples of Turkey. Akçam pointed out the fact that, in these lands, ethnocentric politics have only caused catastrophe and devastation, and that the real solution could be achieved through co-existence, which is, in fact, much easier than militarization and murder. He also stressed the importance of keeping Hrant Dink alive as a civil rights leader for the pursuit of co-existence. Following Akçam’s address, Eileen Khatchadourian from Beirut took the stage for her musical performance.

As part of the ceremony, two videos, “Inspirations 1915” and “Inspirations 2015,” were screened. The first video commemorated individuals such as the Aleppo governor Celal Bey, Kastamonu Gendarmerie Commander İzzet Bey, the Ambassador of the United States Henry Morgenthau, who witnessed, recorded, raised their voices against, and, at the expense of their lives, strived to prevent massacres during the Genocide that was committed 100 years ago in Anatolia.

The second video saluted the people and organisations from Turkey and from around the world, who raise hope for the future with their actions. Among the Insipirations of 2015 were India's Robin Hood Army for gathering left-over food from restaurants and wedding parties, and for distributing them to orphans and the homeless; the White Helmet group in Syria for rescuing people from buildings that were burned or destroyed during the war; MP Viyan Daxil for being the first politician to speak out about the Yazidi Massacre in the Iraqi Parliament; Electric Yerevan for protesting the raised electricity prices in Armenia; Black Lives Matter for drawing attention to and for shaping the public opinion about the police murders of black people committed by police and civilians; Camp Armen for demanding the the unconditional return of the Armenian children's camp in Tuzla, Istanbul to the Armenian people;the young people who lost their lives in a suicide bombing during their press conference in Suruç, Urfa, where they were setting out to give hope, take toys and build a library for the children in Kobani whose lives have been devastated by the war. 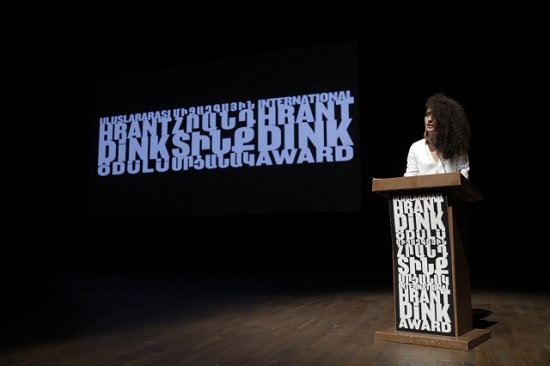 The laureates of 2015 International Hrant Dink Award were announced at the end of the ceremony. As Samar Badawi could not attend the award ceremony due to a travel ban, her colleague Elsa Saade received the statue on her behalf from the President of Hrant Dink Foundation Rakel Dink and 2014 International Hrant Dink Award laureate Şebnem Korur Fincancı. In her speech, Saade explained how Samar Badawi put her life in danger to fight for the fundamental human rights, and how she became an inspiration for thousands of Saudi women with her dreams and her struggle for making them true. She also emphasized that in regions where power is dictated by the abuse of sectarianism, religion, and economic interests, we need people like Samar Badawi to voice out human concerns. Saade also stressed that such awards and messages of solidarity did extend a cord of hope to those who feel afraid and sometimes forgotten in the most challenging parts of the world. 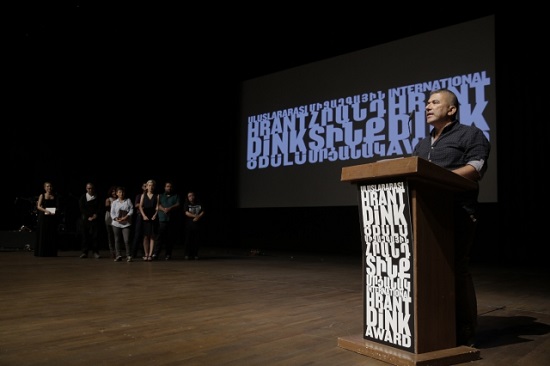 Kaos GL received its award statue from Ali Bayramoğlu, the Chairman of the International Hrant Dink Award Committee. Having received the statue on behalf of Kaos GL, Ali Erol reminded that homosexuals lived their entire lives in the "disquiet" that took the life of Hrank Dink. He also noted that emancipation of homosexuals was a prerequisite for the liberalisation of the society. Erol also stressed the importance of figuring out the linkages between different forms of discrimination. He said that racist and nationalistic discourses institutionalised through state policies did create "enemies of the nation" and that this fake "national integrity" could only be overcome by building bridges across various struggles for freedom.

The award ceremony was broadcast live through www.hrantdink.org and www.hrantdinkodulu.org. Details of the ceremony were shared in Turkish, English and Armenian through the Facebook andTwitter accounts of International Hrant Dink Award.