Hêvî LGBTI+: "We are saying it again; refugees, welcome to your home!"

Hêvî LGBTI+ Association has called to governmental organizations and non-governmental institutions to act against the anti-refugee deportations. 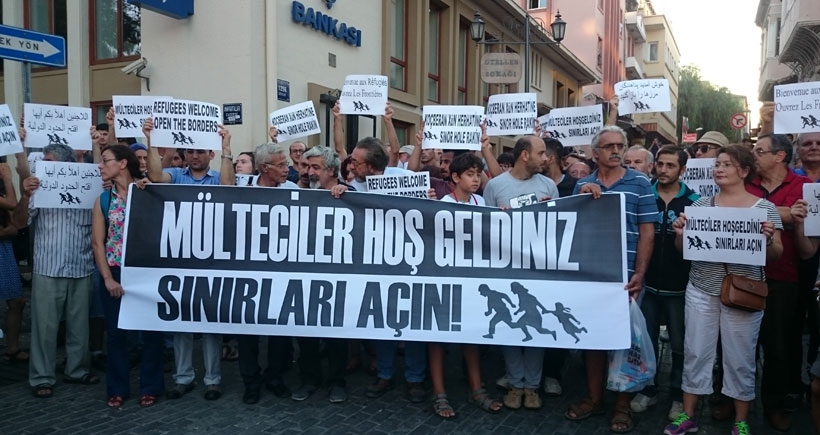 Hêvî LGBTI+ Association has called to governmental organizations and non-governmental institutions to act against the anti-refugee deportations.

A photo of the “Refugees Welcome, Open the Borders” protest from İzmir, 2015.

The Hêvî LGBTI + Association issued a statement regarding the mass deportation of “unregistered” Syrian refugees under various reasons in accordance with the Governorship of İstanbul’s latest ruling and the racist and anti-refugee discourses.

The association has stated that it will continue to support refugees who are victimized by multi-discrimination, racism, xenophobia, and LGBT+ phobia.

“The promise to send Syrians back has created openly racist practices”

The complete statement of The Hêvî LGBTI + Association is as follows:

“With the clashes that started in Syria in 2011, millions of people were displaced. Many of the Syrians who are displaced were forced to take refuge in neighboring countries, especially Turkey. The Syrian refugees who are covered by the Temporary Protection were forced to come to Istanbul, a new migration route; due to the lack of infrastructure like unemployment, security problems, housing, etc. in the cities where they are registered.”

“In this period, the rhetoric of sending Syrians back as a kind of election promise has led to the emergence of openly racist practices such as preventing the Syrians from the public places such as beaches.”

“According to the decision of the Governorship of İstanbul in recent days, it is claimed that the Syrian asylum seekers have been unlawfully deported in masses, under various reasons.”

“Shortly after the Governorship of İstanbul's announcement on the issue, Foreign Minister Mevlut Cavusoglu said, ‘The readmission agreement and visa liberalization will enter into force at the same time and we have suspended the readmission agreement’. It is understood that the refugees are to be used as a new bargaining tool with the EU.”

“With the violations of international laws that are targeted the unregistered Syrian refugees in İstanbul, the most fundamental article of the temporary protection status, the right to “not to be deported” is being violated. With the alleged repatriations, all refugee groups are clearly threatened and their future is further imperiled.”

“We will continue to stand by all refugees who are exposed to multi-discrimination, racism, xenophobia, and LGBTI + phobia. As Hêvî LGBTI + Association, we invite all segments of the society, especially non-governmental organizations, and public institutions, to create a common voice against the anti-refugees. We always say and repeat: Refugees, welcome to your home.”