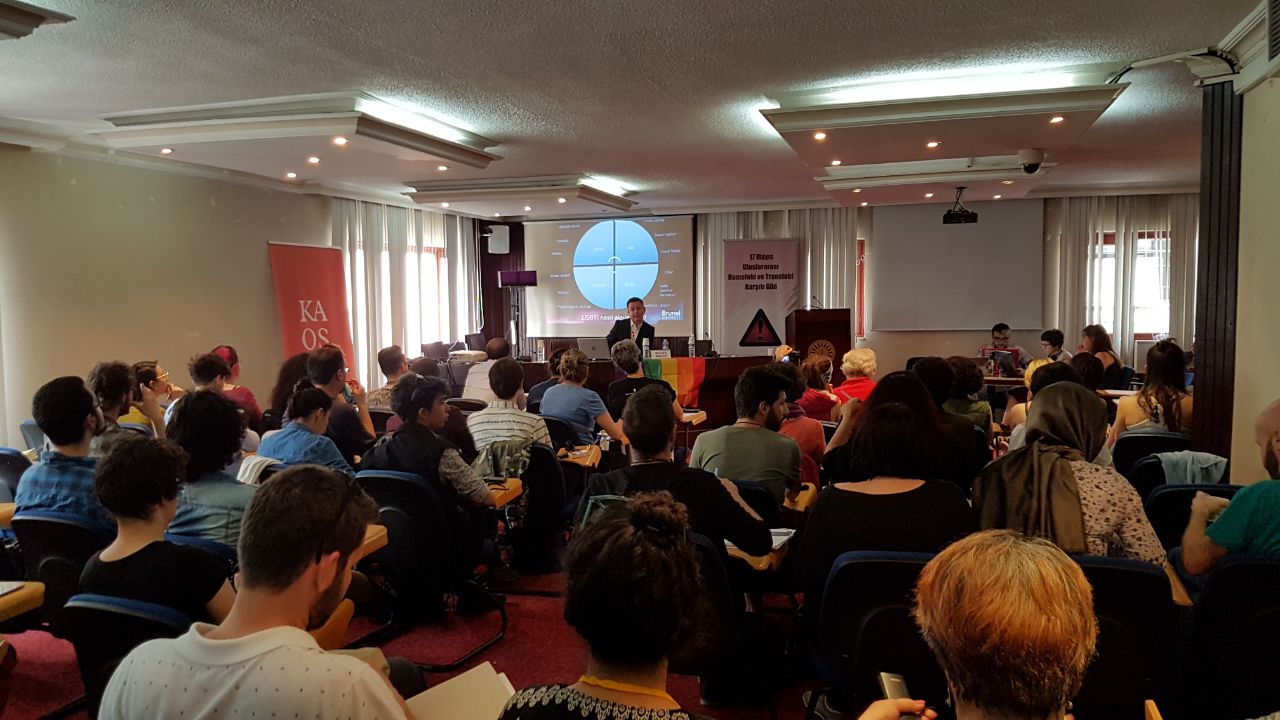 12th Anti-Homophobia Meeting organized by Kaos GL within the scope of International Day Against Homophobia and Transphobia (IDAHOT) started yesterday (13th May) in local government workers’ union TümBelSen in Ankara. In the meeting with theme of “Queer Politics of Labor”, Mustafa Özbilgin, one of the authors of KaosQ+, gave the opening speech. After Özbilgin’s speech, author of Sexuality and Socialism Sherry Wolf and another activist and author Peter Drucker took the stage for the first session. With the moderation of Mutlucan Şahan who is the editor of the latest issue of KaosQ+, Wolf gave speech on sexuality and Marxism and Drucker talked about queer sexualities, nation and labor afterwards.

In the second session, Ceyhun Güler and Murat Köylü took the stage to talk about the situation of LGBTIs at workplace. With the moderation of Özlem Albayrak, first Güler mentioned his analysis on global framework contracts from the discrimination based on sexual orientation and gender identity (SOGI) perspective, then International Affairs Coordinator of Kaos GL Murat Köylü presented the researches Kaos GL conducted on the situation of LGBTIs in public and private sector. 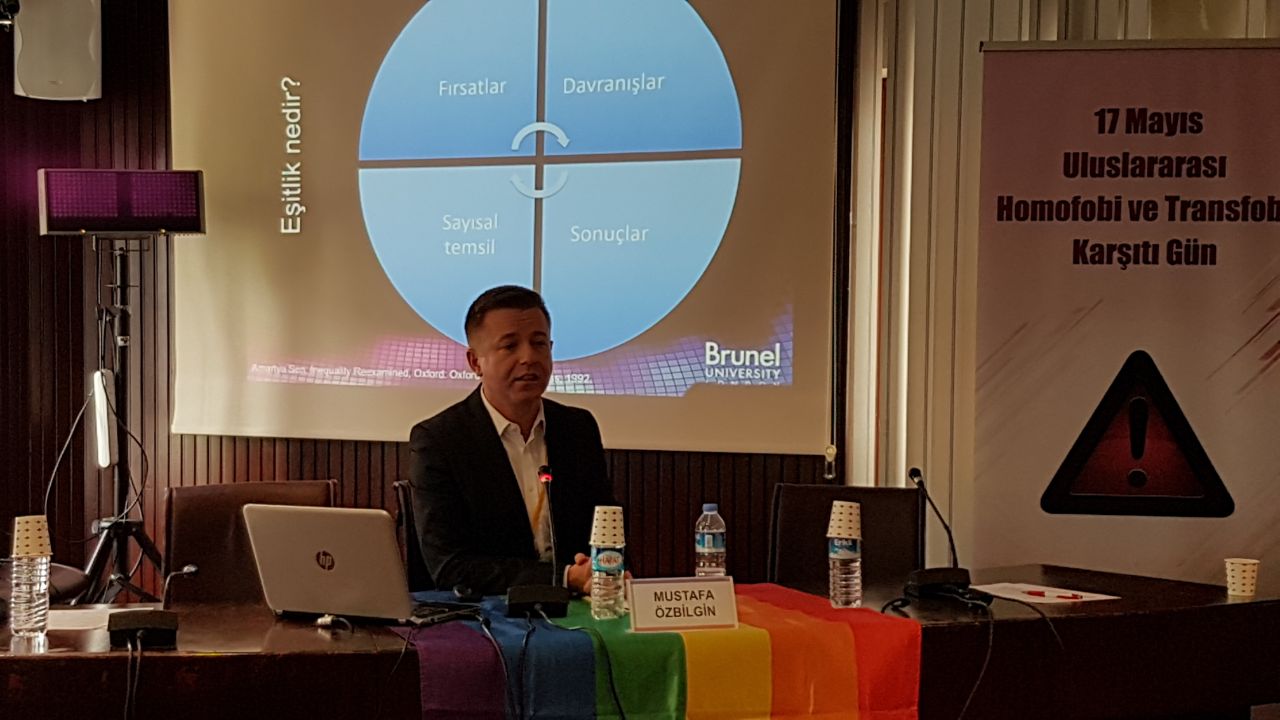 Sexuality and Labor: Questioning the Vulnerability of Achievements and Resistance

During the opening speech, Özbilgin who has a chair position at Brunel, Paris-Dauphine and Koç Universities questioned the “achievements” through the concepts like sexuality, labor, vulnerability and resistance.

Mentioning his studies on LGBTIs at workplace, Özbilgin address the sexuality and labor issues through the vulnerability of the equality of SOGI in the labor markets and through the methods of resistance against this vulnerability. While considering SOGI within the context of labor, Özbilgin said: “We need an intersectional approach when it comes to sexual orientation and gender identity”.

Then Özbilgin mentioned that achievements of LGBTIs in international arena have a positive effect on LGBTIs in Turkey, and he emphasized that especially equality struggle in the private companies could result with achievements. He continues:

“But the achievements are precarious. We witness this obviously in Turkey where the attacks to Pride Parades. If we need to find a reason for the vulnerability of the achievements, it could be neoliberalism and its three corrupted values: individualism, un-institutionalization and financialisation. Neoliberalism built on those three corrupted values causes decay in labor market.”

At the end of his speech, Özbilgin mentioned the suggestions to overcome this vulnerability with references to Judith Butler and Pierre Bourdieu’s works.

“It could be better to approach the diversity issue from a collective perspective instead of looking at as an individual struggle. For the struggle of LGBTI organizations, social and political demands, public pressure, and legal regulations are needed. Still, voluntary works are also important to create public opinion. Institutional structures may be supported against the un-institutionalization discourse. On the other hand, in order to overcome the financialization problem we may act with the ‘equality for equality’ or ‘human rights for human rights’ perspectives.” 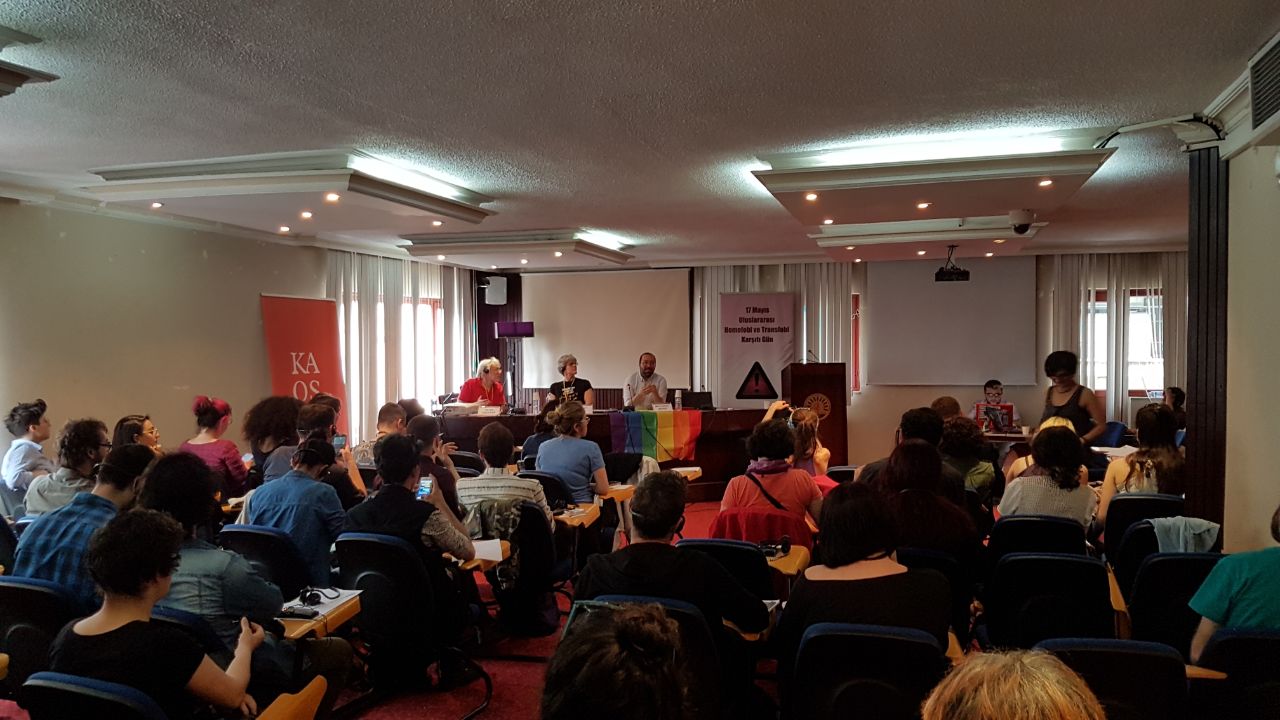 “Struggle of working class has a liberating value”

After the opening speech, Sherry Wolf and Peter Drucker took the stage with the moderation of Mutlucan Şahan. Firstly, Wolf reminded that one of the most obvious objections to socialism is that working class is defined by very narrow and material interests.

“Putting class in the first place does not mean to subordinate the other social problems like racism and homophobia. In Marxism, working class is not idealized. Proletariat can be manipulated easily as the other classes. Therefore, working class should unite in order to overcome the separation within its own class. Because capitalism divides working class as well as it separates proletariat and bourgeoisie.

By saying “Struggles of the oppressed shaked the system, so capitalism had to make reforms”, Wolf told that racism, sexism and homophobia could protect themselves. At the end of her speech, Emphasizing the importance of solidarity, Wolf said: “We will never have what the ruling class have, but we have something to overcome all of them: Solidarity”.

Socialist, activist and author Peter Drucker mentioned the importance of solidarity in the LGBTI movement in Turkey during his speech titled “Queer Sexualities, Nation and Labor”. Reminding that LGBTI movement has had a lot of achievements in recent years, Drucker continued with the relation between neoliberalism and LGBTI struggle.

Drucker told that neoliberalism emerged with the profit crisis of the capital during 1970s, so it cannot be understood without capitalism. Then he added: “Thanks to the alienation against capitalism, an opportunity for queer liberation and the cooperation with socialist left emerged.”

Reminding that LGBTI community is mixed and non-homogeneous, Drucker said: “Although the Muslim immigrants were regarded as homophobic, we know that people living in Netherlands are not homophobic anymore. Extreme right-wingers instrumentalize LGBTIs for their own anti-migrant racism.”

Lastly, emphasizing that attacks of global right-wing groups causes new problems for LGBTIs, Drucker said: “In this context, LGBTIs have to rethink the relation they built with nation and labor.” 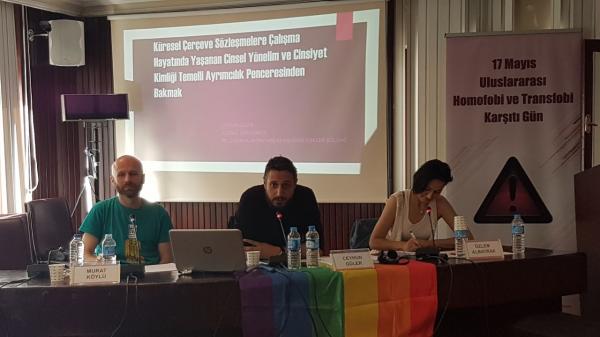 “Solidarity can end the heteronormative discourse of union movement”

In the second session, academician Ceyhun Güler and Kaos GL International Affairs Coordinator Murat Köylü discussed the discrimination based on SOGI at workplace. The session was moderated by Assistant Professor Özlem Albayrak who is a dismissed academician from Ankara University.

Mentioning that whether are there any expressions of sexual orientation, gender, gender identity, homophobia, transphobia or sexism in the texts of global framework agreements signed between the Global Union Federations and multinational corporations, Güler gave examples from the trade union struggle in Turkey.

In the second part of the session, Murat Köylü from Kaos GL talked about the situation of LGBTI employees in public and private sector in Turkey. Köylü stated that the existence of LGBTIs at workplace does not only determine the structure of employment, but democratization also.

Reminding that LGBTIs face with many problems and risks at workplace, Köylü pointed out that the responsibles of those risks and problems are states, governments, administrators and implementers. Then he continued his speech by sharing the data collected for the reports that Kaos GL prepared in 2016 on the situation of LGBTI employees in public and private sector. At the end of his speech, Köylü said that even if there are no written rules or laws to support discrimination, LGBTI employees are discriminated in the aspects of promotion, salary/ wage and employment in Turkey.

The first day of the 12th Anti-Homophobia Meeting ended with the questions of the audiences.