İYİ Party Leader on homosexuality: "Don't want my child to make such a choice but don't beat too"

Meral Akşener, Leader of the opposition İYİ Party: "Do I want my child to make such a choice as a mother? No, I don't. But should I beat the person who makes such a choice?" 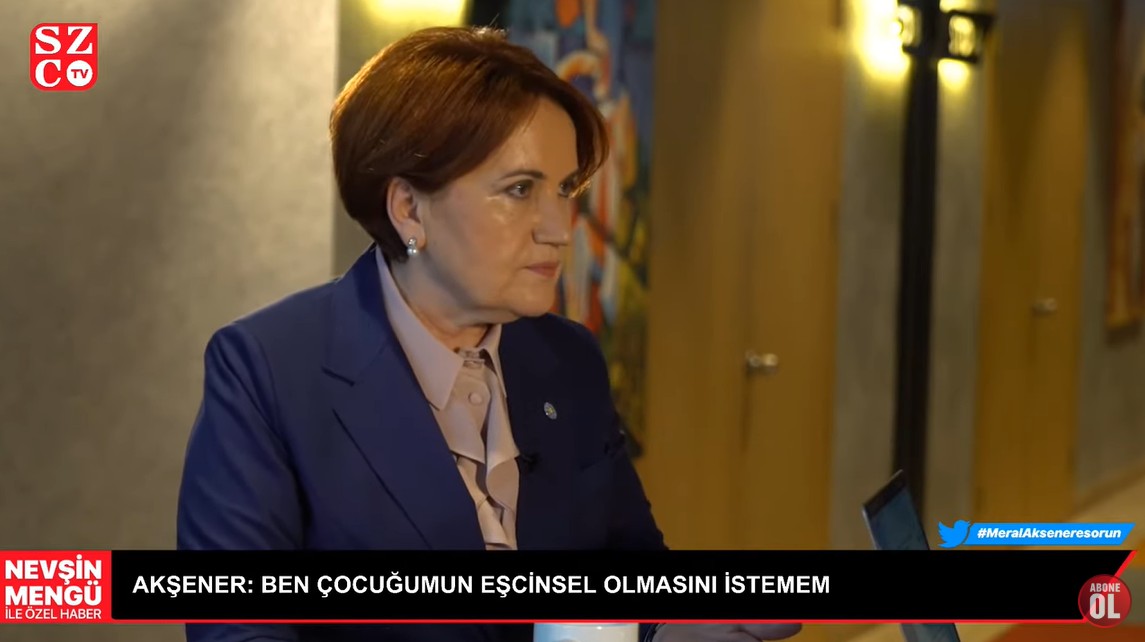 Upon Mengü's words as, "There is the expression of 'sexual orientation' there", Akşener continued her words, "It's from the human rights perspective. As soon as you say a word, you are being accused as you defended homosexuality." Then Mengü asked, "Do you think homosexuality is a perversion? What do you think? If you come to power, what kind of LGBTI policy would Meral Akşener have?"

Akşener said, "Do I want my child to make such a choice as a mother? No, I don't. This is my personal attitude. But should I beat the person who makes such a choice? No. I hate swinging from one radical end to another in Turkey, I'm tired of it."

As an answer to Mengü's question of "Is it possible to have gay marriages in Turkey? Should it be?", Akşener responded, "Look, these are very extreme questions. All these questions, pecking all these are destroying the İstanbul Convention. This is wrong. I repeat it, do I want my child's granddaughter to make such a choice? I do not, but this is related to Meral Akşener's view of life. You like it or dislike it… But would I want a citizen who made such a choice to be beaten? No. If you miss the essence of the matter, the Istanbul Convention would be torn apart and continue you continue to get beaten. I'm talking about this. Instead of discussing the parts of the Istanbul Convention that I think have been distorted, we should cure the suffering of women suffering in many homes."

What is the Istanbul Convention?

"The Council of Europe Convention on preventing and combating violence against women and domestic violence" is also known as İstanbul Convention that became effective on August 1, 2014, with Turkey as its first signatory makes the prevention of violence and to create the institutional mechanisms in the field of struggle against violence mandatory for the states.

"Parties shall take the necessary legislative and other measures to promote and protect the right for everyone, particularly women, to live free from violence in both the public and the private sphere."

"The implementation of the provisions of this Convention by the Parties, in particular measures to protect the rights of victims, shall be secured without discrimination on any ground such as sex, gender, race, color, language, religion, political or another opinion, national or social origin, association with a national minority, property, birth, sexual orientation, gender identity, age, state of health, disability, marital status, migrant or refugee status, or another status."