Kaos GL representative Nevin Öztop has joined the conference with the practice of ‘Regional Network Against Homophobia’, which brought together activists from 13 countries from the Balkans, Caucasia and the Middle East in 2011 in Ankara. 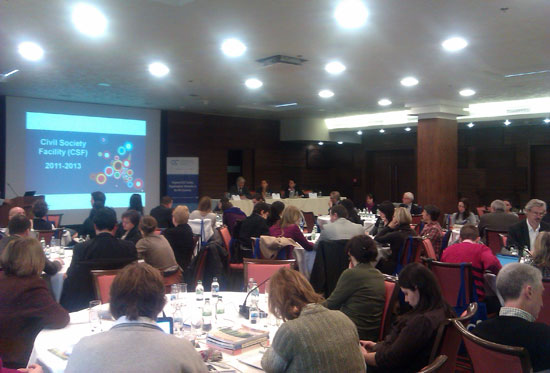 A two-day conference on civil society organisation (CSO) networks in the Western Balkan countries and Turkey took place in Sarajevo on December 13-14. It aimed at enhancing CSNs’ structured participation in the EU accession process, and at their greater involvement in the implementation of the Regional Cooperation Council (RCC) strategy.
The conference has brought together representatives of regional civil society networks from the Western Balkans, Turkey and EU, as well as officials from governmental institutions responsible for cooperation with the civil society sector. Representatives from EU’s Directorate General for Enlargement are also participating in the event.
“We believe that the framework of the RCC Strategy and Work Programme 2011-2013 provides a comprehensive platform for regional CSO networks and other relevant stakeholders to identify related actions to be undertaken regionally as well as in the individual countries” – stated Jelica Minic, Deputy RCC Secretary General.
“In this respect, we view civil society involvement as an important contribution to making Regional Cooperation Council efforts more efficient and closer to the needs of the people in our region.”
“This regional conference is a unique initiative in the wider mobilisation of civil society organisations in the region. It is for the first time bringing together representatives from vital regional civil society organisation networks in the Western Balkans and Turkey as well as their constituencies and other stakeholders in order to initiate a dialogue on what they can actually supply in the EU accession context” – said Palle Westergaard, Technical Assistance for Civil Society Organisations (TACSO) Team Leader.
Kaos GL representative Nevin Öztop has joined the conference with the practice of “Regional Network Against Homophobia”, which brought together activists from 13 countries from the Balkans, Caucasia and the Middle East in 2011 in Ankara. Öztop stated, “The purpose of networks is to put together contacts and information and see what comes out of it. In Kaos GL’s network, what we have in common in all three regions are our values of being against nationalism, militarism, sexism and homophobia. This network aims to create channels to link different forms of oppressions that go hand in hand. Our purpose is to create a support and solidarity system in which we feel less and less vulnerable every day.”
It created a space for exchanging perspectives and identifying needs for further capacity development and better focusing of donors’ support to effective regional SCO networks, addressing at the same time major regional issues.
The general objective of TACSO is to strengthen civil society within a participative democracy, to stimulate a civil society-friendly environment and culture, as well as to strengthen the overall capacities and accountability of CSOs within the beneficiaries of the EU’s Instrument for Pre-accession Assistance (IPA), to guarantee the quality of CSOs’ services and their sustainable role in the democratic process.
The conference, “Regional Civil Society Organisations” (CSOs) Networks in the IPA Countries’, is organised by the EU-funded TACSO project and the RCC Secretariat.