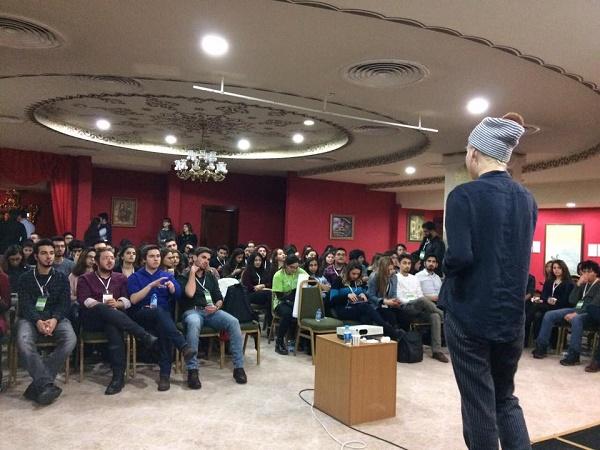 On January 22, Aylime Aslı Demir from Kaos GL made a presentation on “Discriminations of Sexual Orientation and Gender Identity in the field of Medicine” to doctor candidates participating from different universities in Turkish Medical Students Association Human Rights and Peace Study Branch.

During her speech Demir pointed out the problems causing from the imposition of gender binarism (woman – man/ girl - boy) in the field of medicine, access of LGBTIs to right to health and the importance of psychological support during the coming-out process.

Referring to the fact that 90% of medical interventions to intersex babies are arbitrary and these interventions negatively affects entire lives of intersex people, Demir also reminded that permanent injury to the body is the violation of human rights. Then she pointed out that the medical intervention to intersex people should only be done in vital circumstances, and she stated that the imposition of sexual dichotomy should not be included in medical practices.

After telling that LGBTIs cannot go to doctor often due to the fear of being exposed, similarly trans men are away from the gynecologic examination with the fear of being discriminated, and they are deprived of the right of access to health, Aylime Aslı Demir stated that doctor candidates can change the situation.

Another issue Demir referred to was the difficulty of finding specialists in public hospitals and that specialists were mostly employed in private hospitals because there was not enough room for gender transition process in medical education. As a consequence of this situation, Demir stated that although the transition operation seems to be covered by the state's social security, economic burden of this operation is on trans people completely.

Demir stated that the homosexuals who had to hide their sexual orientation could not even open up to their psychological counselors for the solution of the psychological problems they had experienced and that this situation had increased the problem more. She also added that attitudes of psychologists during the coming-out process were very decisive for both the LGBTI individuals and their families.

In her presentation, Demir also mentioned LGBTI doctors. Today, when business and private life completely integrate with social media use, doctors, who have to hide their sexual orientation, have had to live their lives completely closed.

Demir added that in order to get rid of the problems which LGBTIs, who are in disadvantaged groups in the health field, faced when taking the health care service, the health policies which should be changed as well as the behaviours of the doctors are both decisive. She finished her speech by emphasizing the importance of working together.