Karin Karakasli: The LGBTI Movement has the potential to bring freedom for everyone

"Meeting with LGBTIs, getting in touch with their movement is a liberating experience itself." 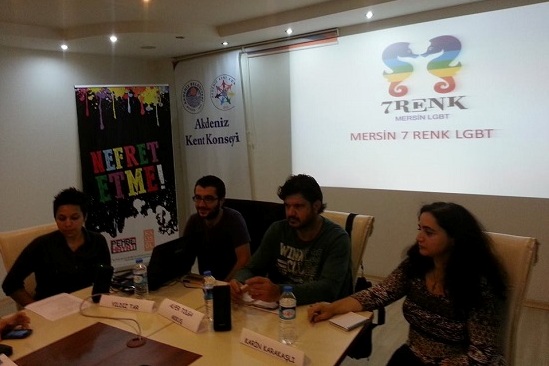 Karin Karakasli, writer and journalist, who spoke at the Mediterranean Symposium against Homophobia and Transphobia said, "Meeting with LGBTIs, getting in touch with their movement is a liberating experience itself. I find the potential of the LGBTI movement with its new questions and interrogative manner very important."
The first Mediterranean Symposium against Homophobia and Transphobia which the Mersin 7 Colors LGBT Association arranged started on 9th October.
The symposium which was created with the contribution of Kaos GL and Pink Life associations talked about "The Others in the Media” in its first session. Gizem Ondokuz from the Mersin 7 Colors LGBT made the introductory speech. She pointed out that the small gathering which formed in March 2013 has continued their struggle for a year now as an association. Ondokuz made a presentation regarding a summary of their work in the southern city of Mersin.
Following the session of Ondokuz’ opening speech, Yildiz Tar, one of the editors of kaosGL.org, and Karin Karakasli, writer and journalist from the Agos newspaper, gave their speeches. Alper Tolga Akkus from Yesilgazete moderated the panel which focused on experiences with hateful comments towards LGBTIs and Armenians, rights based journalism and alternative journalism.
"A publishing system where public domain is considered more important than human life."
Yildiz Tar who began his speech by reminding everyone of the "Transvestite Terror" stories said "In the 90s, and even though it has lessened, still today, the media portrayal of LGBTIs marginalizes them, there is a serious parallel line between the other alienated groups and LGBTIs."
Tar who criticized how the ISIS attacks in Kobani was portrayed in media said: "We’re going through a period where public domain is considered more important than human life. In the news reports on Kobani; they don’t show the truth of how many people died because of government violence; rather we see and read the statements written on how the deaths caused damage to public domain. The importance of rights based journalism and focusing on human life and rights is exposed once again.
Tar, in the rest of his speech evaluated the media on topics such as hatred, discrimination, objectivity, homophobia and transphobia. He shared many examples with the listeners.
"What is important is Agos’ LGBT coverage and Kaos GL’s Armenian coverage"
Following Tar, Karin Karakasli gave insight on the history Armenian publishing. Karakasli who reminded how important the Armenian publishing business was during the Ottoman Empire also shared the story of Agos newspaper from its foundation until today.
Karakasli criticized how the oppressed groups are confined within themselves and are distant from one another. She said "It is not important that I talk about the Armenians. What is important is that I speak of LGBT rights and that Kaos GL, for example, speaks of the Armenian Genocide.
"A potential of freedom for everyone"
Karakasli who mentioned that unlike the other social and identity movements we see the LGBTI movement has the power to bring freedom for everyone also stated "Meeting with LGBTIs, getting in touch with their movement is a liberating experience." Karakasli reminded the words of Kaos GL: "Liberation of homosexuals will also free heterosexuals."
Karakasli also pointed out how her being Armenian was used against her as slang and hatred. She explained how the media developed hateful comments towards Armenians the based on conjuncture.
Translation: Jasmine Ozkeskin