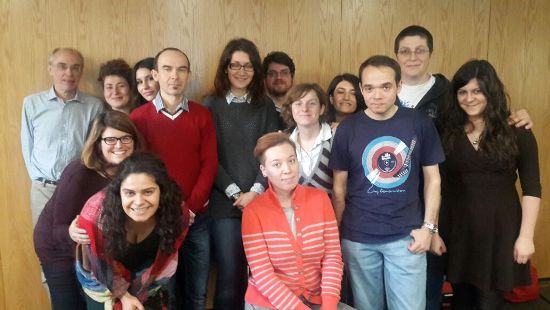 Basic Rights Strategic Litigation Workshop was held on November 27th and 28th in London. 12 activists and lawyers from Macedonia, Hungary, Turkey, Russia, Ukraine, Armenia, Romania and Bulgaria participated in the workshop which was organized by ILGA Europe.
Attorney Hayriye Kara from Kaos GL Association, Attorney Rozerin Seda Kip from Social Policies Gender Identity and Sexual Orientation Studies Association and Attorney Sinem Hun from the Counselling Centre for Transgender People Association participated in the workshop from Turkey. Strategic litigation with reference to fundamental rights and European Court of Human Rights (ECtHR) process were discussed during the workshop and it covered ten topics:
Organizational strategy in a hostile environment
Presentations about two completely different situations which contradict the strategies were made and current situations in Montenegro and in Russia were discussed under two titles as “Montenegro LGBT Progress Forum” for which there is support from the government but hostile attitudes from the society and “Coming out in Russia” for which hostile attitudes are shown both by the government and the society.
Freedom of Expression and Assembly
The authorities in Russia refused to give permission to hold a march on Trans Day of Remembrance in St Petersburg due to following reasons:
·         It may cause public disorder
·         “Transsexual propaganda among minors” is banned in St Petersburg
·         It may cause traffic accidents
·         The water company responsible for the cascades in the region didn’t give consent
The Court of Appeals Court stated that “Participants holding a march … would violate the right to rest of the citizens and it is impossible due to potential harms it would cause in moral and spiritual developments of the minors”.
A brief presentation of the case was made by Kseniya Kirichenko and it was followed by the presentation and discussion of the legal issues.
Freedom of assembly
How to handle the arguments like security and public order which are generally used following the threats of homophobic groups were discussed.
Hate crimes
Two pending cases one being in district court but having the potential to be brought to Strasbourg and the other being in ECtHR were presented and discussed.
Hate crime in Ukraine: Trans Day of Remembrance
The conditions of exhaustion of domestic remedies and which cases might be applicable for the ECtHR were discussed over the attack occurred in Ukraine on Trans Day of Remembrance in 2010.
Identoba and others versus Georgia case
Failing to make an effective investigation by the authorities and respect to private life and protection of sexual integrity issues were discussed over a Georgian organization named Identoba.
Hate speech
The view of the ECtHR with regards to hate speech, hate speech cases which pose problems within the context of freedom of expression and relevant articles of European Convention on Human Rights were discussed over the Mihalov vs. LA SKY case
Application to the ECtHR and supporting the ECtHR cases
Attorney Nigel Warner presented the basic rules to be followed during application to ECtHR. Particularly the subjects about acceptability of the cases and the points to take into consideration during preparation of the applications and getting involved in a pending case were shared.
Extrajudicial ways / Advocacy and media in a hostile climate
The participants were separated into two groups and made discussions about advocacy and media and the experiences were shared. Particularly the issues as how the advocacy can be made in order to take wider steps related to investigating and preventing homophobic/transphobic violence and protection of freedom of expression, assembly and marching in countries in which authorities have hostile attitudes towards LGBT rights and what else can be done in order to turn the strategic cases into campaigns were discussed.
Extrajudicial ways and applicants
Issues as determining the cases for strategic litigation, reaching the applicants, protecting the personal data and privacy of the applicant, protecting the physical and psychological safety of the applicant, balancing the demands of the applicants and demands of the strategic litigation were discussed.
Translation: Vahap Karakus