LGBT rights records of Turkey presented to the EU

Violations of LGBT rights in Turkey were presented today in Geneva during the European Union session of Turkey’s Universal Periodic Review. 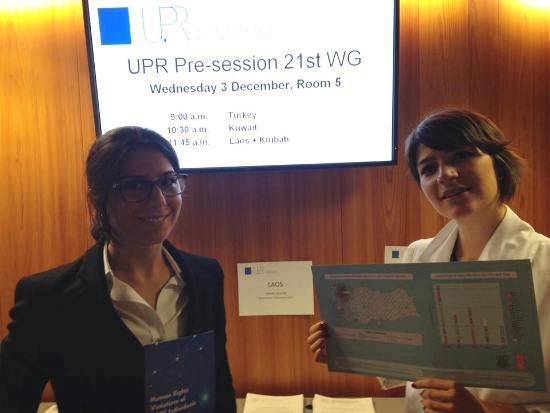 Violations of LGBT rights in Turkey were presented today in Geneva during the European Union session of Turkey’s Universal Periodic Review.
Zeynep Bilginsoy from LGBTI News Turkey and Ezgi Kocak from Kaos GL Association made a statement to the EU representatives concerning the LGBT rights records of Turkey.
Here is the full statement:
Dear colleagues and representatives of the European Union,
Thank you for giving us the opportunity to be part of this meeting and to present the situation of lesbian, gay, bisexual, and trans individuals in Turkey. We represent the coalition of organizations (Kaos GL, LGBTI News Turkey, and the International Gay and Lesbian Human Rights Human Rights Commission).
At the first-cycle of the Universal Periodic Review, Turkey accepted recommendations by Norway and the Netherlands for non-discrimination based on sexual orientation and gender identity. Furthermore, Turkey accepted the Czech Republic’s recommendation to review national legislation on non-discrimination with regard to women and gender identity. However, Turkey has failed to implement these recommendations and have instead moved in the opposite direction.
Despite the Turkish government’s commitments made during the first UPR and in spite of the collective efforts of the Turkish and international civil society organizations over the past four years, no anti-discrimination legislation – in line with the UN and the CoE norms and standards- has yet been put into the legislative process. Particularly, the terms “sexual orientation” and “gender identity” were not included in the 6th Democratization Package of February 2014 that includes the Anti-Discrimination Bill and regulations on the basis of Hate Crimes. Furthermore, no reference to sexual orientation and gender identity were included in the Article on Equality of the New Constitution’s draft.
Article 90 of the Constitution of the Republic of Turkey stipulates that international agreements duly put into effect have the force of law. The non-discrimination article of the Istanbul Convention, which Turkey ratified in November 2011, includes the terms “sexual orientation” and “gender identity”. This means that Turkey must fulfil its international obligation to bring its domestic laws in line with this convention to ensure the protection of LGBT individuals, something that the government in Ankara has so far refused to undertake.
Finally, Turkey’s 2014 Progress Report complements our UPR submission and highlights equality and non-discrimination, right to life and security of the person, administration of justice, including impunity and the rule of law issues where the Turkish government fails to address in order to improve the human rights situation in Turkey for all citizens including LGBT individuals.
Recommendations
We respectfully request that the issue of protection of all individuals regardless of their sexual orientation and gender identity is raised during the upcoming UPR session and that the following recommendations are made to the government of Turkey: