LGBTI+s’ resistance hurdled police attack: We have no thought of going away

Police attacked İstanbul LGBTI+ Pride March this year as well. The attacks commencing in Cihangir, went on at the streets. LGBTI+s marched to Cihangir by crossing over police attack. 373 LGBTI+ activists were detained and they were released after a night at custody. 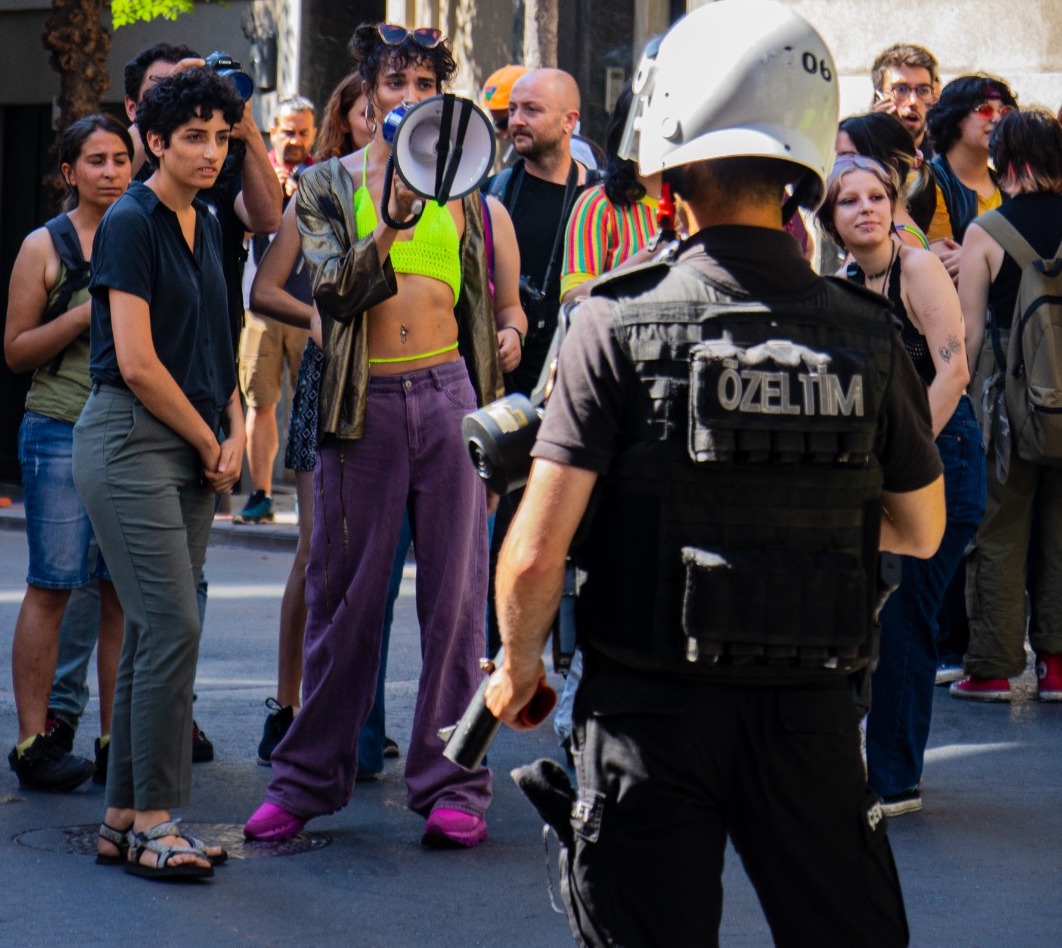 İstanbul LGBTI+ Pride Week, which was planned to be held 30th time this year, was banned by the decisions of Kadıköy and Beyoğlu District Governorships.

Subway and roads were closed

Metro İstanbul announced that Şişhane and Taksim metro stations would be out of use today (June 26) just before the 20th İstanbul LGBTI+ Pride March, which is planned to be conducted within the scope of Pride Week. In the announcement, Metro İstanbul mentioned that train services were canceled upon a decision by İstanbul Governorship. 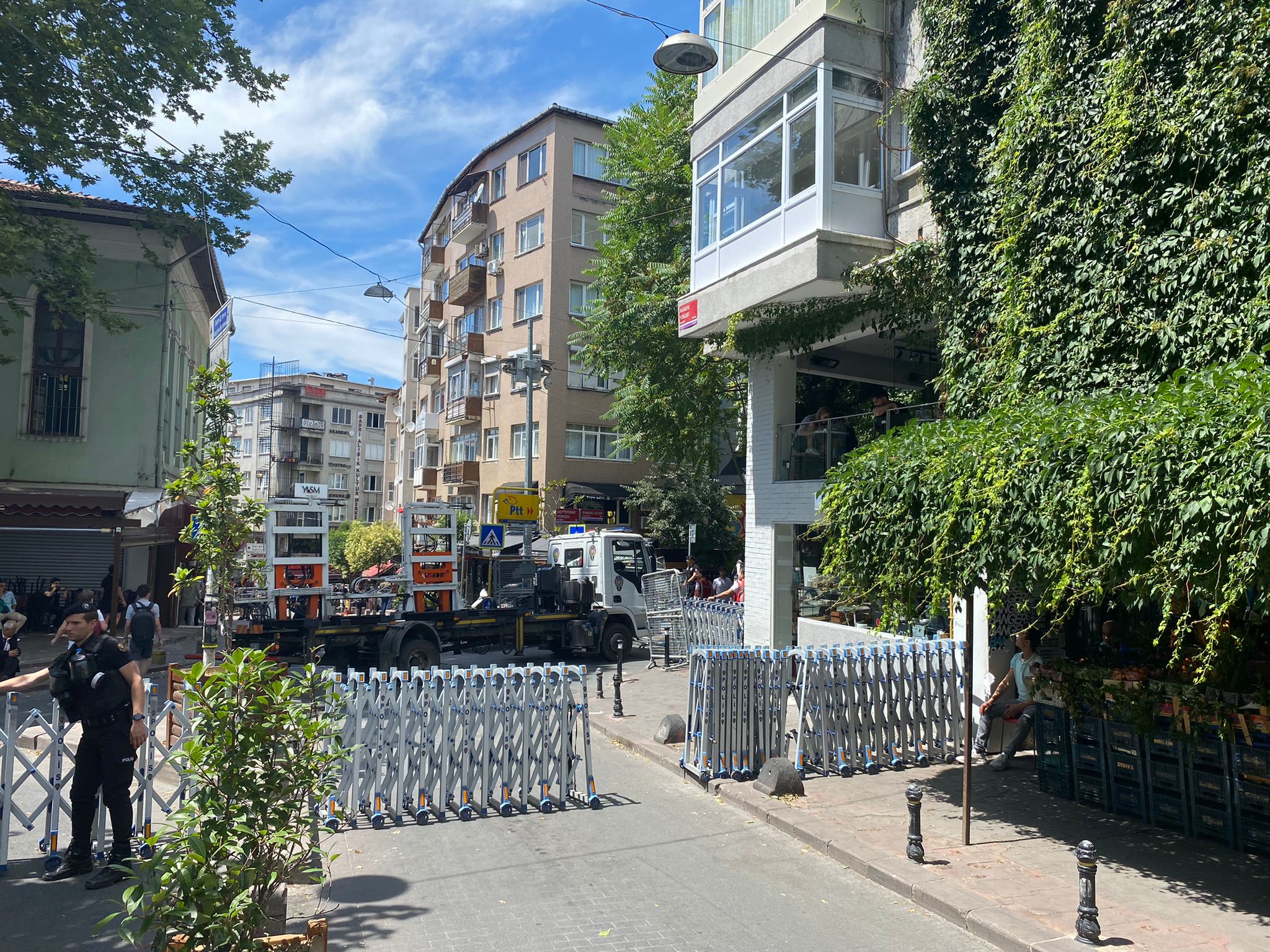 On the other hand, İstanbul Governorship announced that most of the ways around Taksim would be closed to traffic on the day of Pride March beginning from 11.00 am yesterday (June 25).

The police closed all ways going out İstiklâl Avenue by making barricades today in the early morning hours. They conducted people out of the street. Sıraselviler Street, to where the Committee made a call for Pride March, was also barricaded by the police as of 12 pm.

İstanbul LGBTI+ Pride Week Committee created a telephone and WhatsApp line considering the probable violation of rights and detentions before the march. 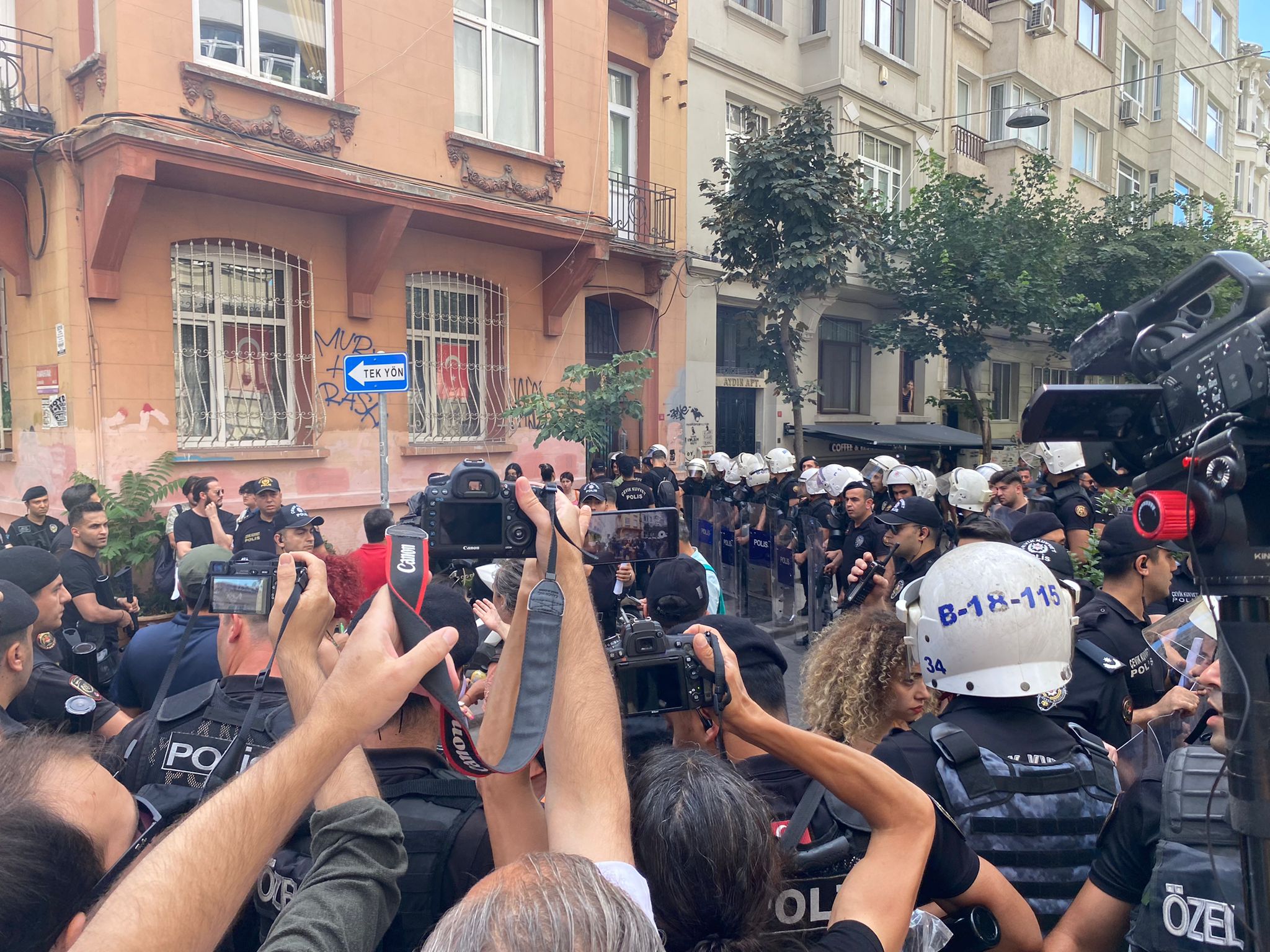 The police kicked people out of Firuzağa Kahve, in Cihangir, at 13.30 pm, hours before 17.00 pm, when the march will be held. Having emptied the venues, police attacked LGBTI+s sitting at cafes in Cihangir, at 15.15 pm. Blockading around lawyers and LGBTI+s, police took lots of LGBTI+ activists into custody with rear-handcuffing. 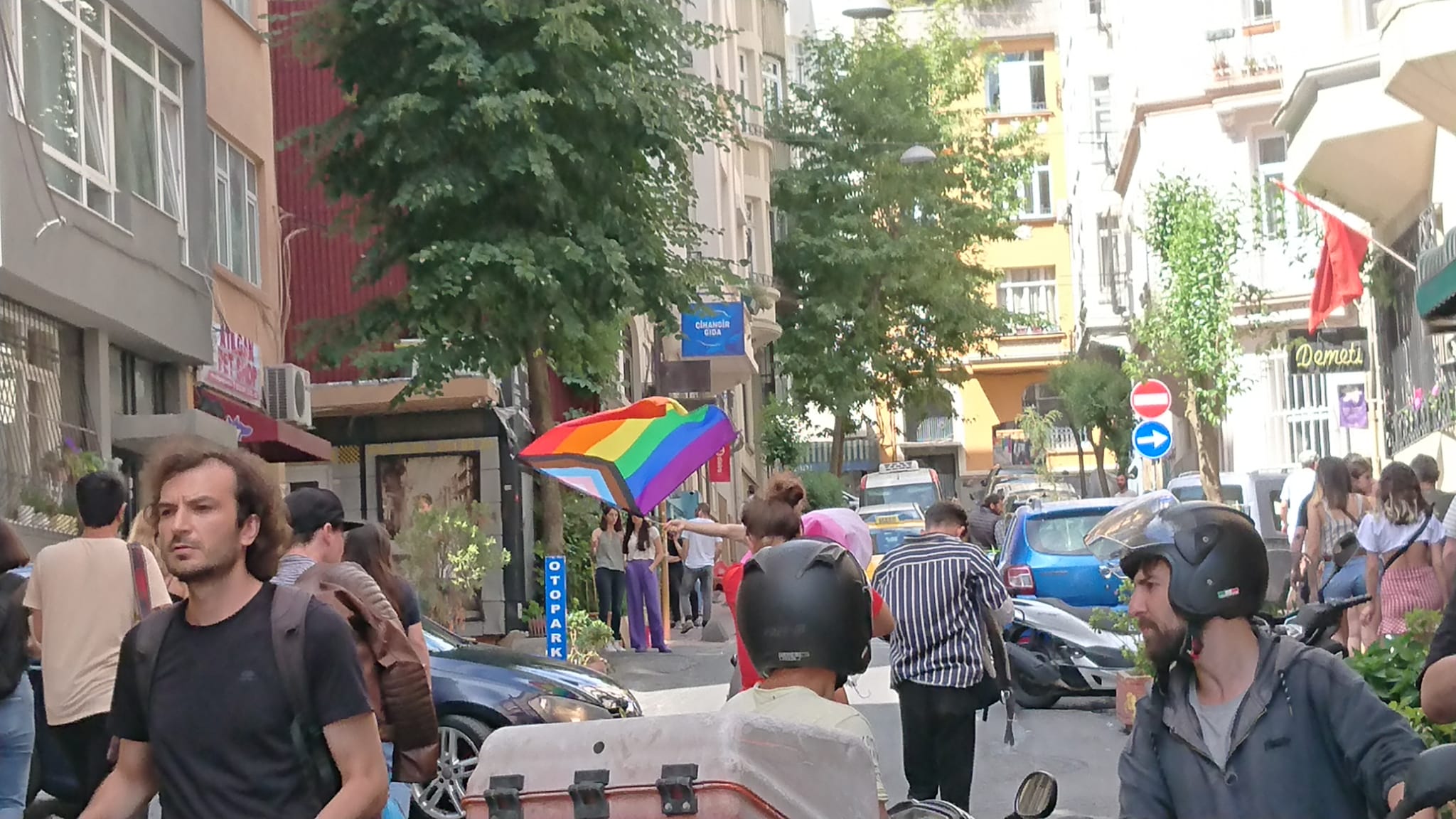 On the other hand having attacked LGBTI+s at a venue in Büyükparmakkapı Street, the police took LGBTI+s and the venue owner, into custody.

Police prevented journalists and reporters and also attacked press members. Police attacked people who reacted against detentions by shouting “Love, love, liberty / freedom”. Police also took the ones, who clamored against torture under surveillance, into custody. 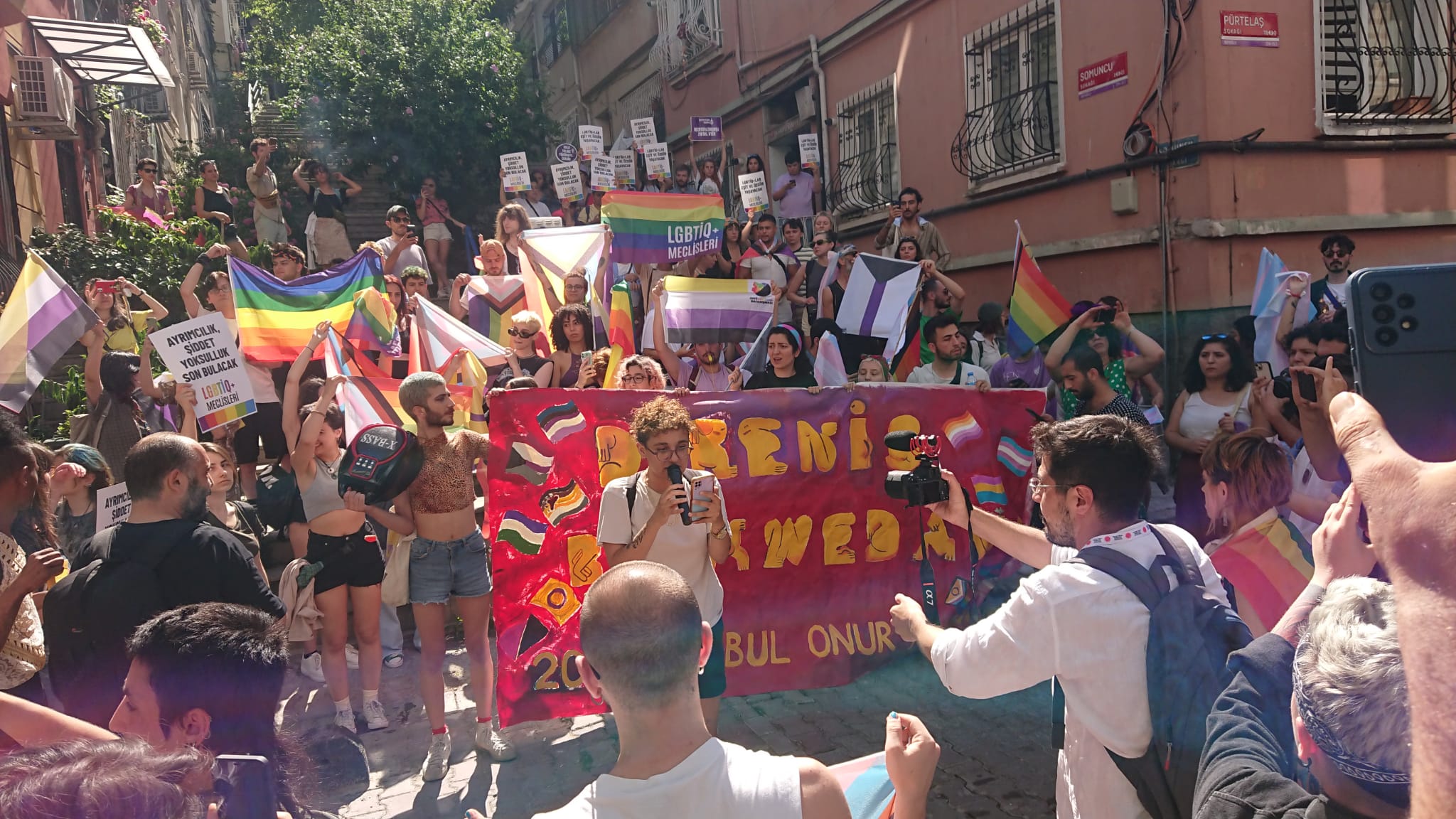 Police blockaded around press in Cihangir in order to prevent them to follow the protests. Press members were kept waiting under sun for a long time. Then they attacked journalists and lawyers with riot shields.

Having hurdled the police attack, LGBTI+s came together in Cihangir Pürtelaş Street. The press statement was made to the accompaniment of the slogans like “Will the world fall out of place, if gays and trans were free”, “Discrimination is a crime, not the rainbow”, “Kürdistan exists, queers exist”, “Trans murders are political.”

Following the march in Pürtelaş, Bolahenk and Ülker Street, police attacked LGBTI+s at Kazancı Yokuşu once again. Many of them were taken into custody. People protested the police violence by casseroling. 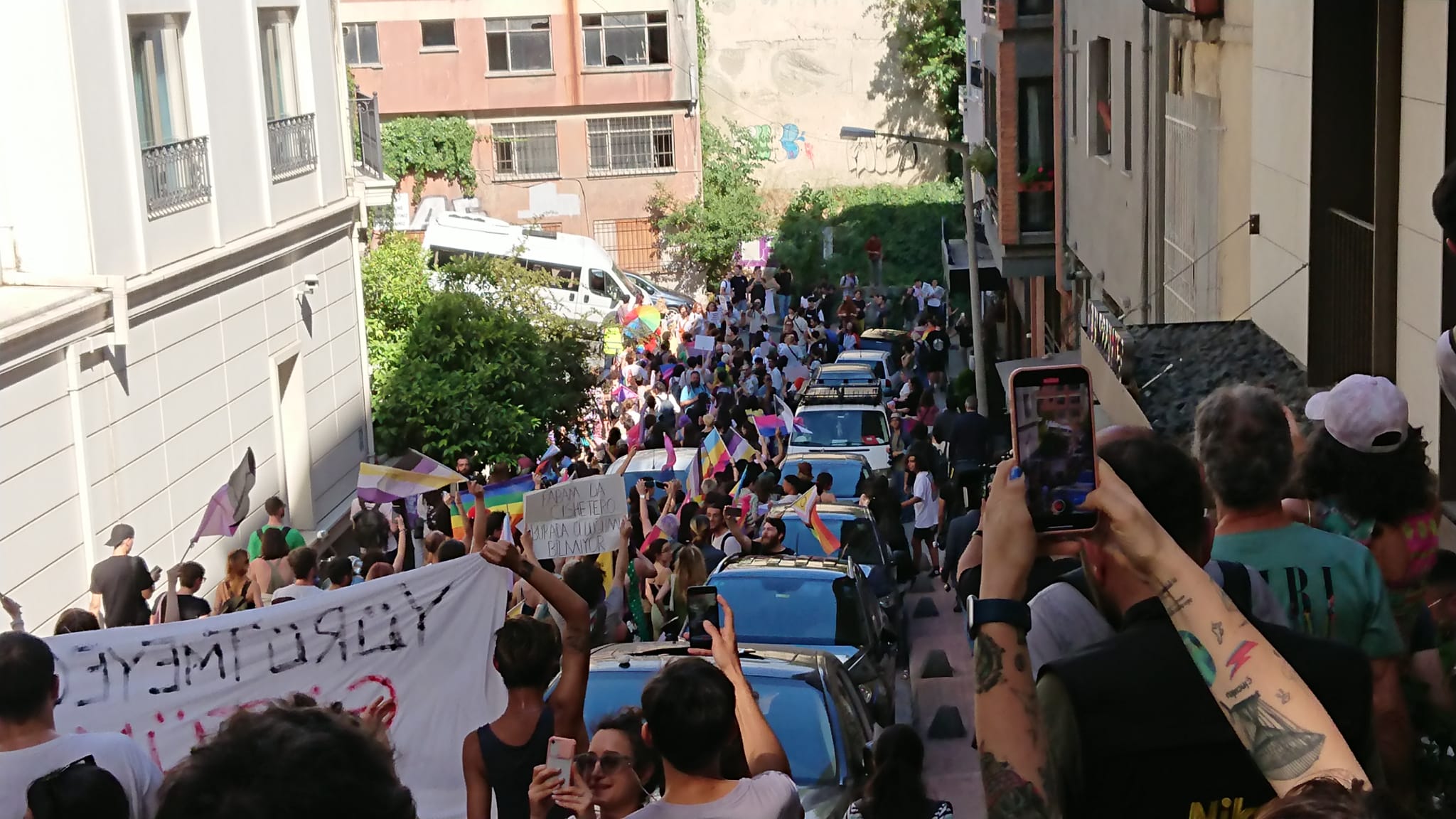 373 LGBTI+ activists were taken into custody during police attacks, day along. 34 of them were under age. Police violence towards activists and their lawyers continued at the police center.

LGBTI+ Pride Week Committee made a call for  dispersion at 18.00 pm:

“Helicopters, 100+ gözo, we are dispersing  in small groups, so glad you are queers, don’t forget our every march is pride march. You may send video and photograph to +905431785004 via WhatsApp, likewise, you may reach us via +905352747022 in case of emergency and detention.  Take care for your safety while dispersing. See you again in streets and squares.  #RAKRAKRAKGELDİK”(We Came RAKRAKRAK)

We are holding our 20th Istanbul LGBTI+ Pride Parade on Sunday, June 26, in Taksim, just like every year. 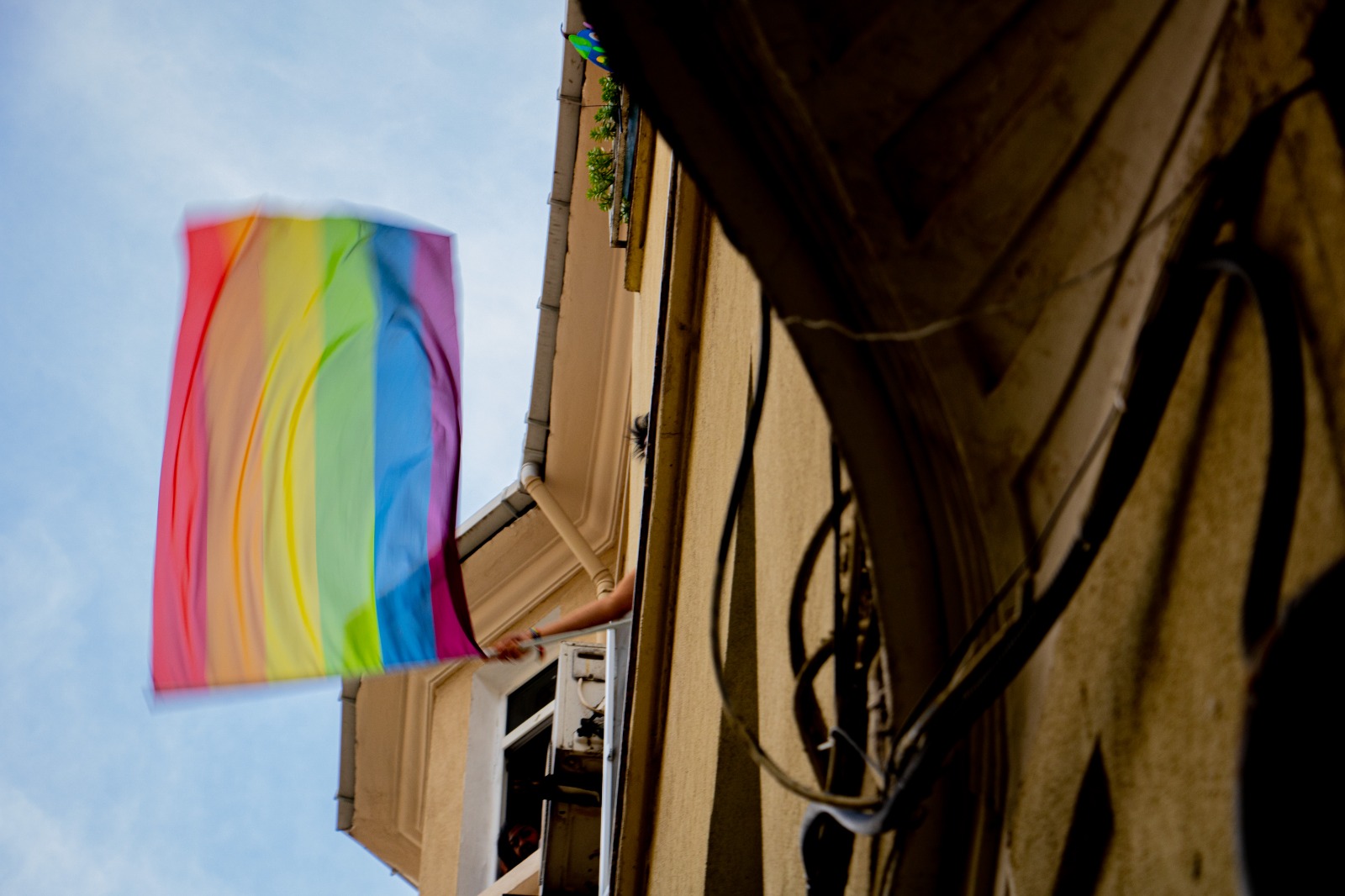 We, who came together with the theme of resistance and rushed to the Gezi in 2013, call out resistance against heterosexism and violence, against the increasing homophobia, transphobia and biphobia, and all kinds of phobias, and male-dominated state policies!

We salute those persecuted for Gezi and sentenced to heavy prison sentences unlawfully by the courts. We also salute the Saturday Mothers/People, who have been gathering every Saturday at Galatasaray Square for 900 weeks in search of their missing and detained yesterday.

Against all policies of disregard, targeting, intimidation, and silencing, we shout again from all Taksim streets. We are here, and we will burn anyone without water in our fire, get used to it or make peace. We have no intention of leaving. 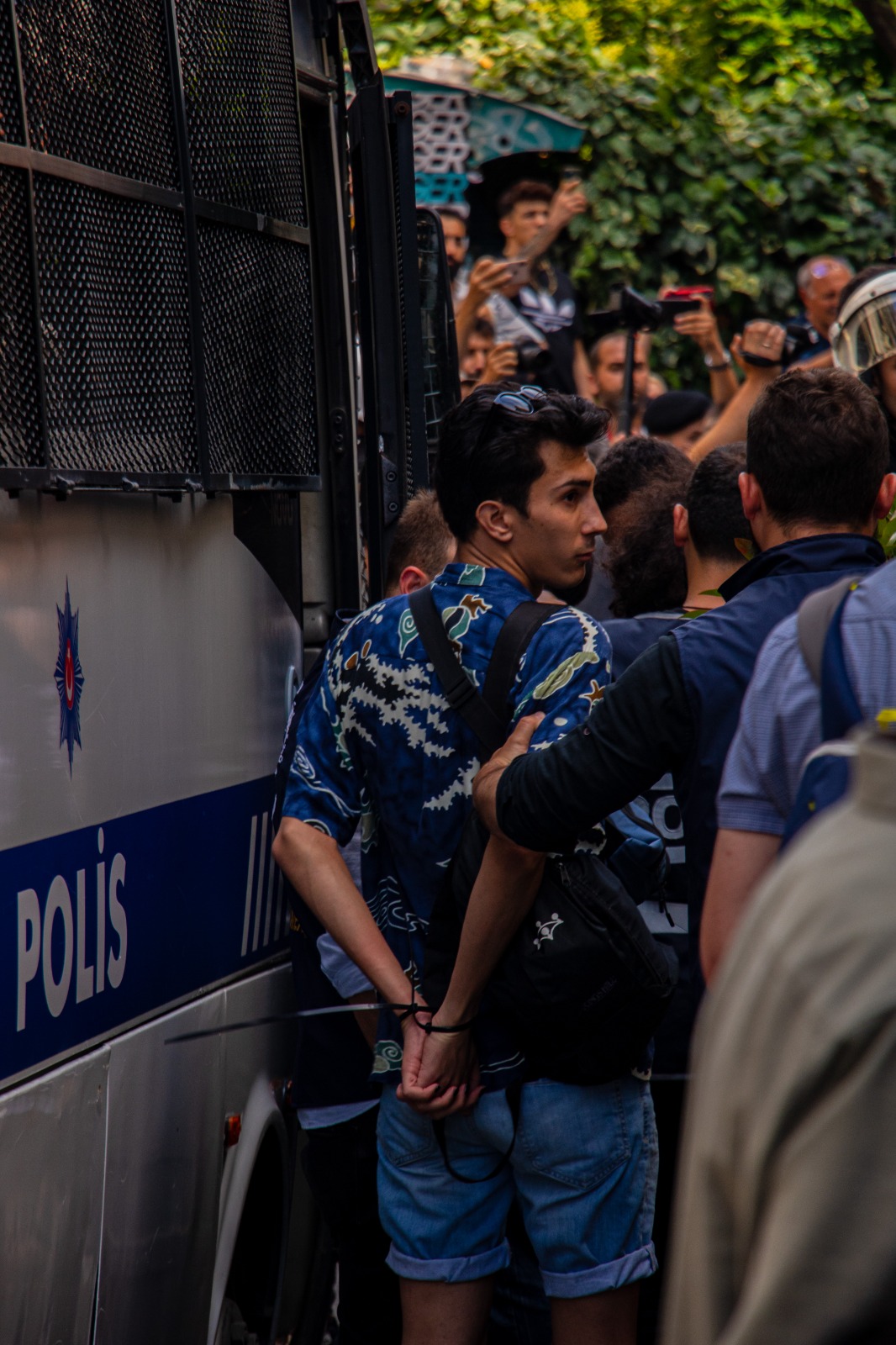 We stand side by side despite the attacks and intimidation on our homes, streets, and bodies,  shoulder to shoulder, leg to shoulder. We are here with the grace of all our friends, killed and driven to suicide because of state repression and hatred. We hold the state accountable for the loss of Zirve Soylu, Hande Kader, Ocean Efe, Eylül Cansın, Roşin Çiçek, Doski Azad, Ahmet Yıldız and all our other friends. 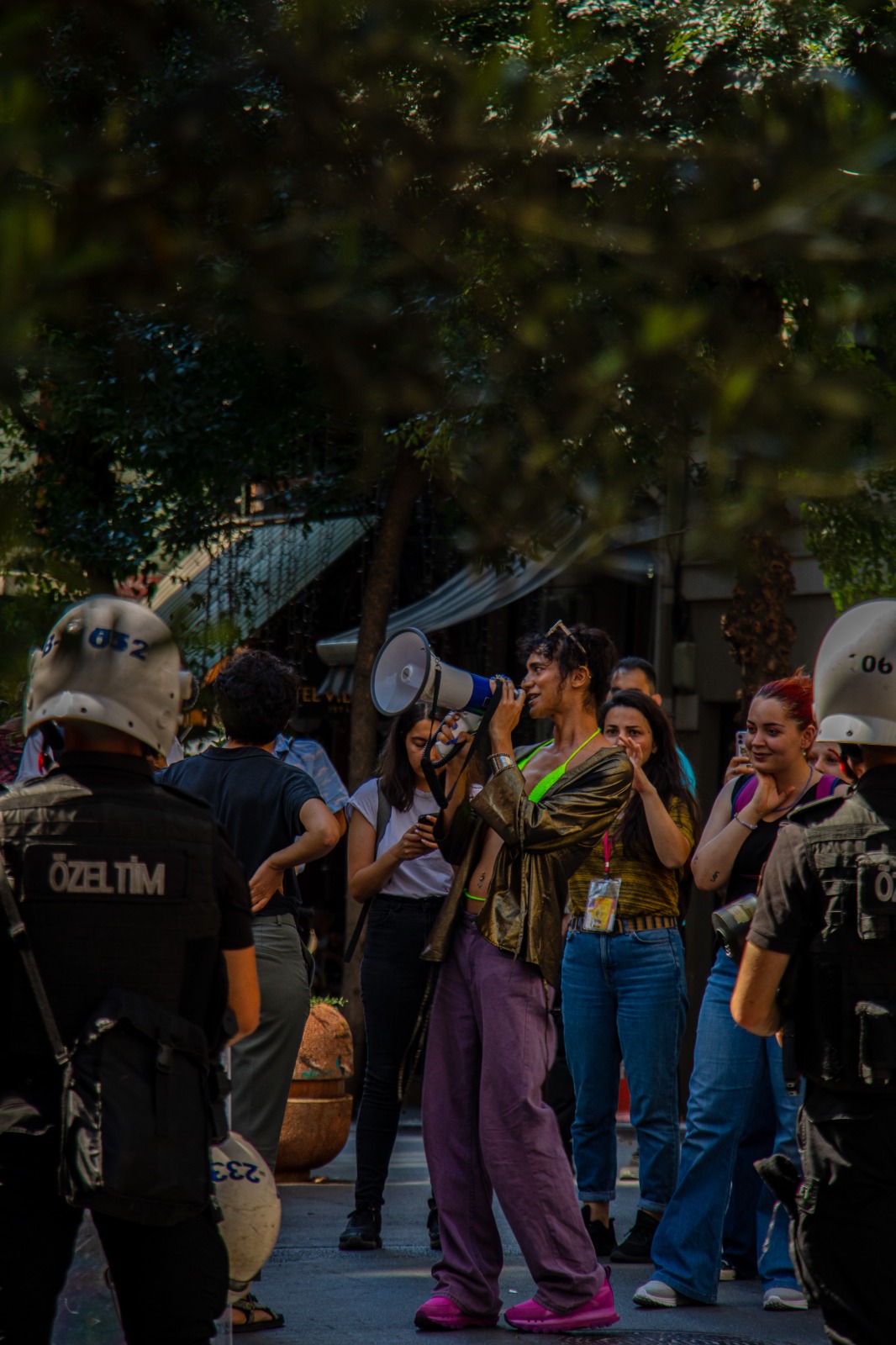 Just as we continued the struggle of displaced sex worker friends in Esat/Eryaman, and refused the displacement of trans sex worker women living and working on Küçük Bayram Sokak despite the pandemic, we now resist together with  trans women sex workers  on Bornova Street in İzmir. We stand together with our friends and do not accept the fines imposed on our Kurdish trans+ friends who were hand-picked and detained at the Great Women's Gathering held on March 6 last year.

We are aware that war and the repression it creates gradually swallow everyone and everything. We have continued to resist the increasingly heavy military options and war policies in Kurdistan since 2015. Lubunya will not turn their backs on Kurdistan or the Kurdistan LGBTI+ movement. 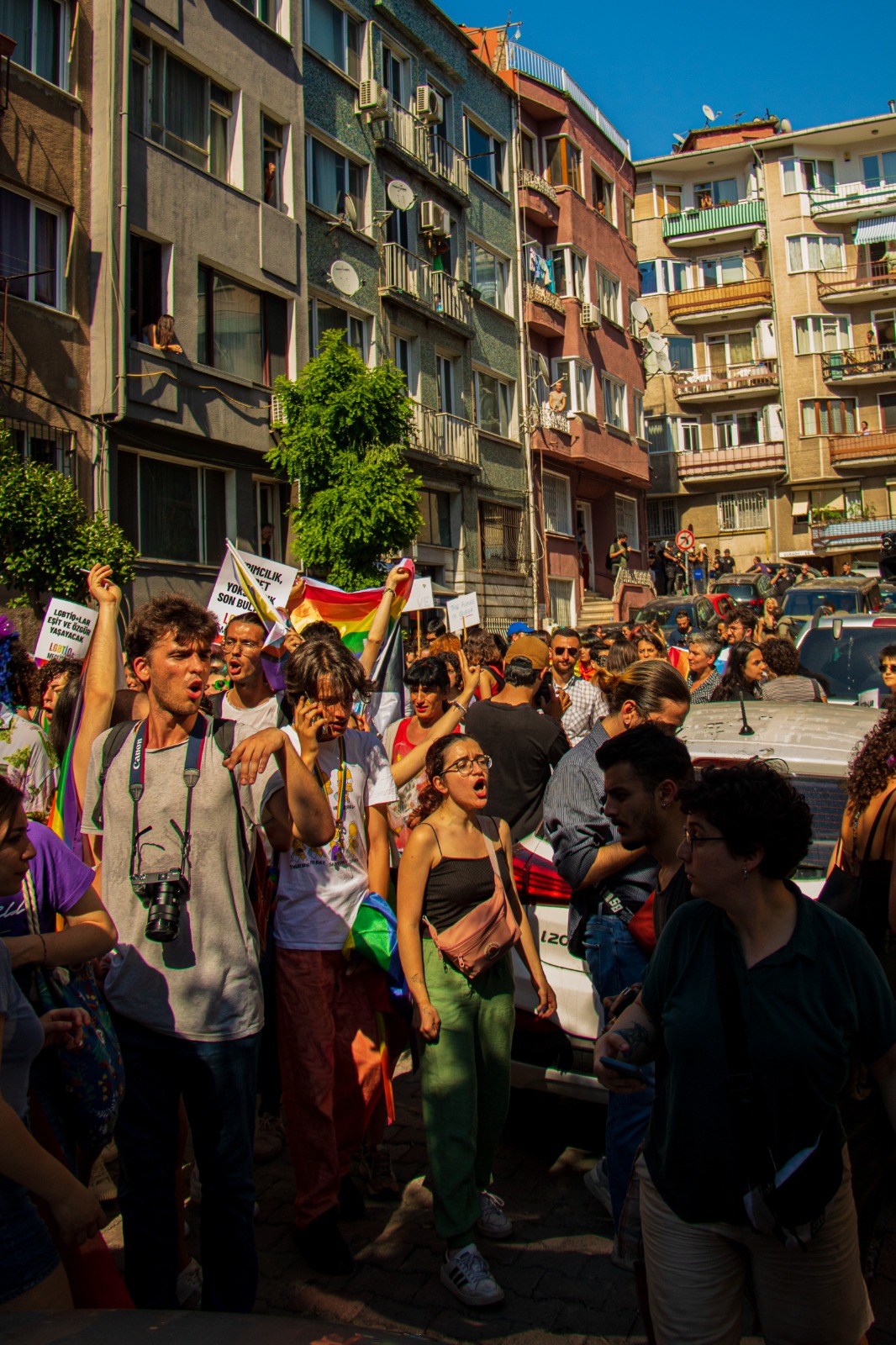 No one was held accountable when our friends died crossing the Maritsa river and the Aegean sea. We announce that we are together with our refugee friends, who have been targeted with increasing hostility, and that we defend life together. We know that the mindset targeting LGBTI+s is the same. We are on the streets today dreaming of a boundless, classless, genderless world.

Refugee Lubunya Are Our Pride

We stand together against the targeting and hate campaigns by the state and paramilitary gangs acting with state power. 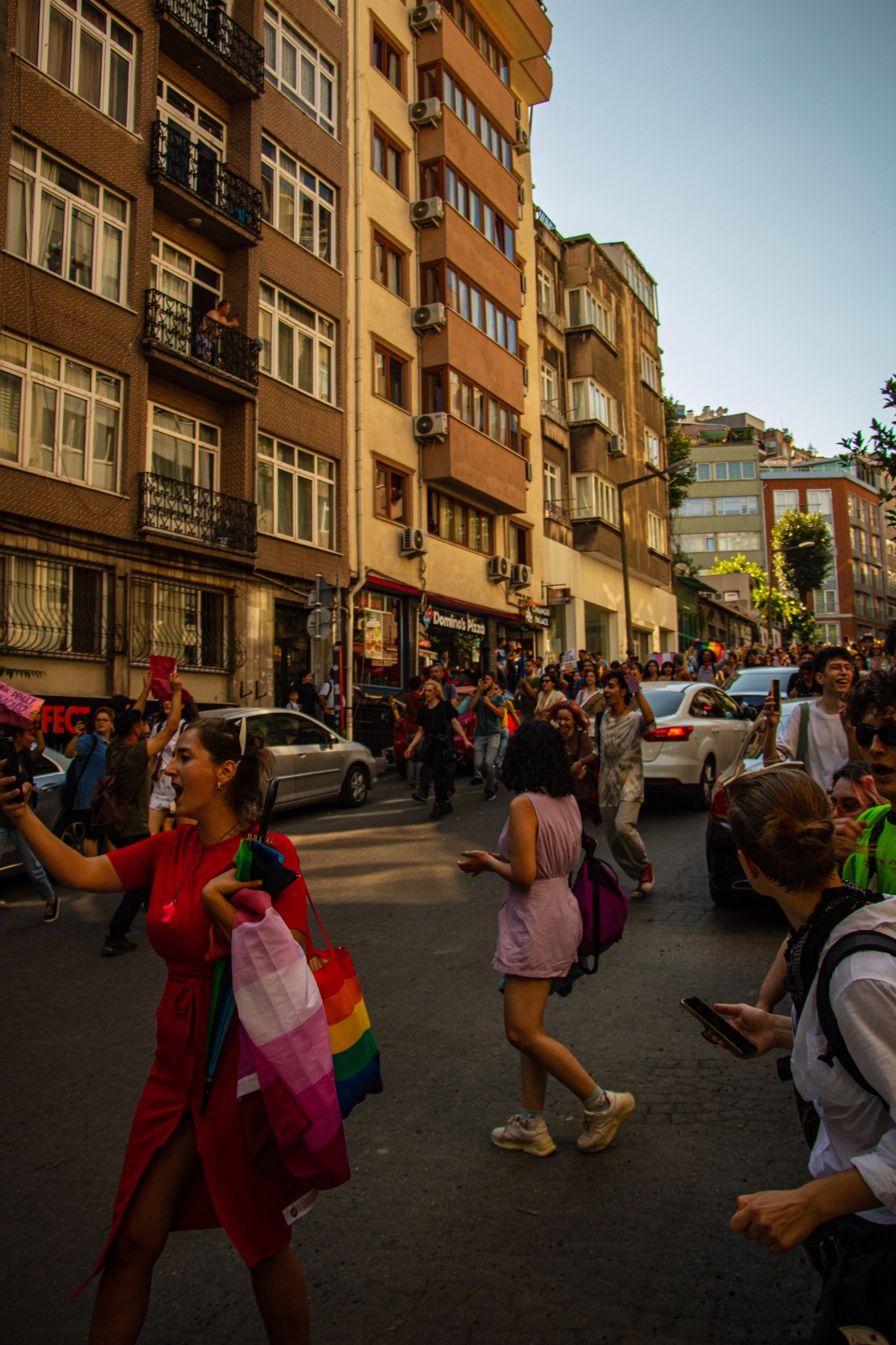 We know that LGBTI+ hostility is not unique to these lands; we commemorate LGBTI+s who lost their lives in the attack in Oslo two days ago. Our struggle and solidarity know no bounds.

The voices of lost friends, of the lubunya who resist everywhere, are in our hearts. Their energy is in our enthusiasm; their courage is in our resistance. Each of us is a strength to each of us.

Together we have force. We get our power from our resistance, and we continue to resist. As LGBTI+s who celebrate their dignity and existence on the streets every year in the last week of June, we are here with persistence in our struggle, hope for tomorrow, and the courage and solidarity we receive from each other. We were, we are, we will be!