On Tuesday (6 March), SOLIDAR celebrated the 12th edition of the Silver Rose Awards in the European Parliament, hosted by Véronique de Keyser MEP. 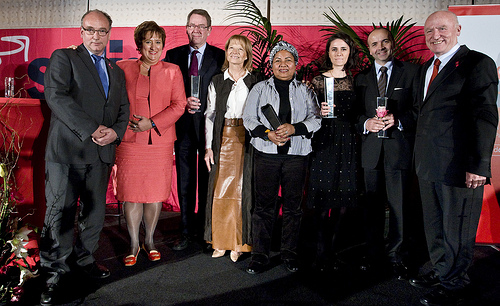 On Tuesday (6 March), SOLIDAR celebrated the 12th edition of the Silver Rose Awards in the European Parliament, hosted by Véronique de Keyser MEP. The event this year heard contributions from European Commission, Laszlo Andor, and Staffan Nilsson, President of the European Economic and Social Committee, before getting down to the heart of the matter: the awards.
A special award was presented to The Norwegian People represented by Prime Minister Jens Stoltenberg and accepted by Niels Engelslchion, Deputy Head of Norway to the EU and Ambassador to Belgium: "This is a token that everyone has thought of us", he said before continuing: "We have a democracy and no-one can destroy that for us."
Iris Munguia was presented with her prize for her work campaigning for women workers’ rights on banana plantations in Honduras. She accepted the award calling for "a campaign for more stable jobs for women and zero tolerance against sexual harassment on banana plantations".
Nevin Öztop from Turkish LGTB organisation Kaos GL was presented with the award for their work campaigning for the rights of LGTB people in Turkey: "This award goes to every LGTB human being in this room, in Brussels, in the world, those who died for who they were or the person they fell in love with."
Poul Nyrup Rasmussen, former President of the European Socialists, received a lifetime achievement award for this work in opening up political parties to initiatives by citizens and progressive civil society: "No-one can change alone for the better, but we can change together", said Rasmussen.
Photos: Juha Rohinen EUP