‘Issue is not about getting rid of differences but destroying inequality’

Close to thirty Civil Society Representatives came together for the LGBTI’s rights.

Close to thirty Civil Society Representatives came together for the LGBTI’s rights.

Civil society came together to find a solution for the human rights violations exposed to LGBTI people, on 10th October. Close to fourty Civil Society Representative discussed about the discrimination on gender identity and sexual orientation.

Göregenli by refering to bombing in Peace Rally in Ankara said ‘’Wherever there is evil in the World, has the inequality at the background.We are seeing wars as results but we need to focus on the discrimination and inequality at the behind.If we were not in here today, we would be at the demonstration among the peace lovers.’’

“Discriminations are connected to each other”

“There is no way for a nationalist to not to be a homophobic.Also no way for a homophobic to think about women issue in an equal perspective.Discriminations are connected to each other” said Göregenli, by denying the claim of discrimination’s origin based on differences between people.

Göregenli continued the speech about the socialization and discrimination in this way: 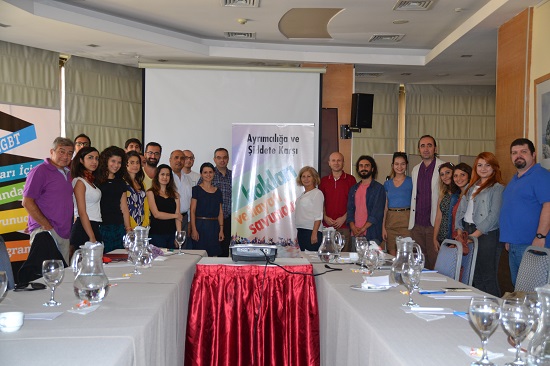 “The reason of discrimination is not itself.’’

“The reason of discrimination is not itself. I had a Kurdish neighbour for forty years. I didn’t know that.There was not even a single problem between us.Of course there wasn’t, because he didn’t told that he was Kurdish. Issue is not about getting rid of differences but destroying inequality in real life.”

Göregenli, by mentioning homophobia and transphobia are heavier than the other discrimination types, ‘’Homosexuals and transsexuals are present in any kind of social group that’s why the discrimination is stratified and heavier’’ said.

‘’Pride March is under risk’’

Begüm Bağdaş talked about the history of LGBTI movement in Turkey and the World. Stressing on the issues about granting of rights for transsexual identities and equal right struggle even in countries that thought protecting democratic rights, Bağdaş said, ’’In 2014’s data, homosexuality is defined as a crime by 80 countries.’’

‘’Today in Turkey, lots of LGBTI organizations is established with the help of Kaos GL Association.Despite everything, there is a flourishing LGBTI movement from social life in Turkey.’’ Bağdaş who said Turkey might be included in the countries of Pride March under the risk list, after the police attack in Pride March in İstanbul.

In the last session, Secretary General of Konak Kent Council Mehmet Kuzu said that they have began this journey on the search of equality and their works fpr LGBTI people’s equality.’’We got relevant institutions and organizations together.We moved together with Siyah Pembe Üçgen Association and Kaos GL Association.’’ Kuzu said who took the opinions of civil society participants about LGBTI’s rights on activity and policitical.