Psychiatrists Koray Başar, Ardıl Bayram Şahin, Seven Kaptan along with Psychologist Özlem Çolak have talked to KaosGL.org at the Symposium of LGBTI Mental Health which held in Istanbul last week. 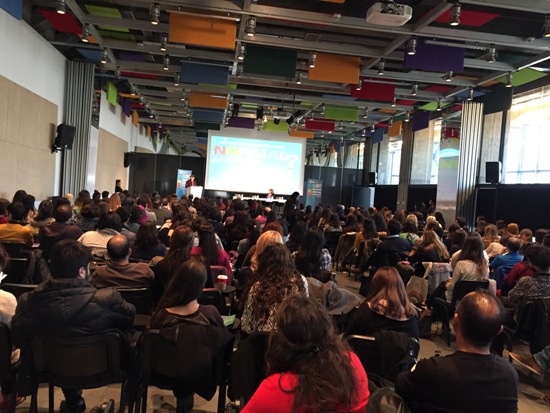 Psychiatrists Koray Başar, Ardıl Bayram Şahin, Seven Kaptan along with Psychologist Özlem Çolak have talked to KaosGL.org at the Symposium of LGBTI Mental Health which held in Istanbul last week.

Huge turnout was acquired to the symposium which was held at the central campus of Istanbul Bilgi University.

First of all, the concept of “normal” and “disease” terms were taken into account over the approaches of psychology and psychiatry to Lesbian, Gay, Bisexual, Transsexual and Intersex people throughout history and discussed with critical comprehension.

The sessions in which participants discussed the clinical approaches to children who represent mismatches with their genders and how those approaches should be in the future, were the center of discussion.

While the labors and teachings of LGBT associations with the other corporations working on mental health were being discussed, students from various universities and experts shared their researches and experiences about LGBTI people in the forum that organized in commemoration of Psychologist Mahmut Şefik Nil.

The construction process of “normal” woman was also discussed in the session of lesbian, bisexual and transsexual woman’s visibility. 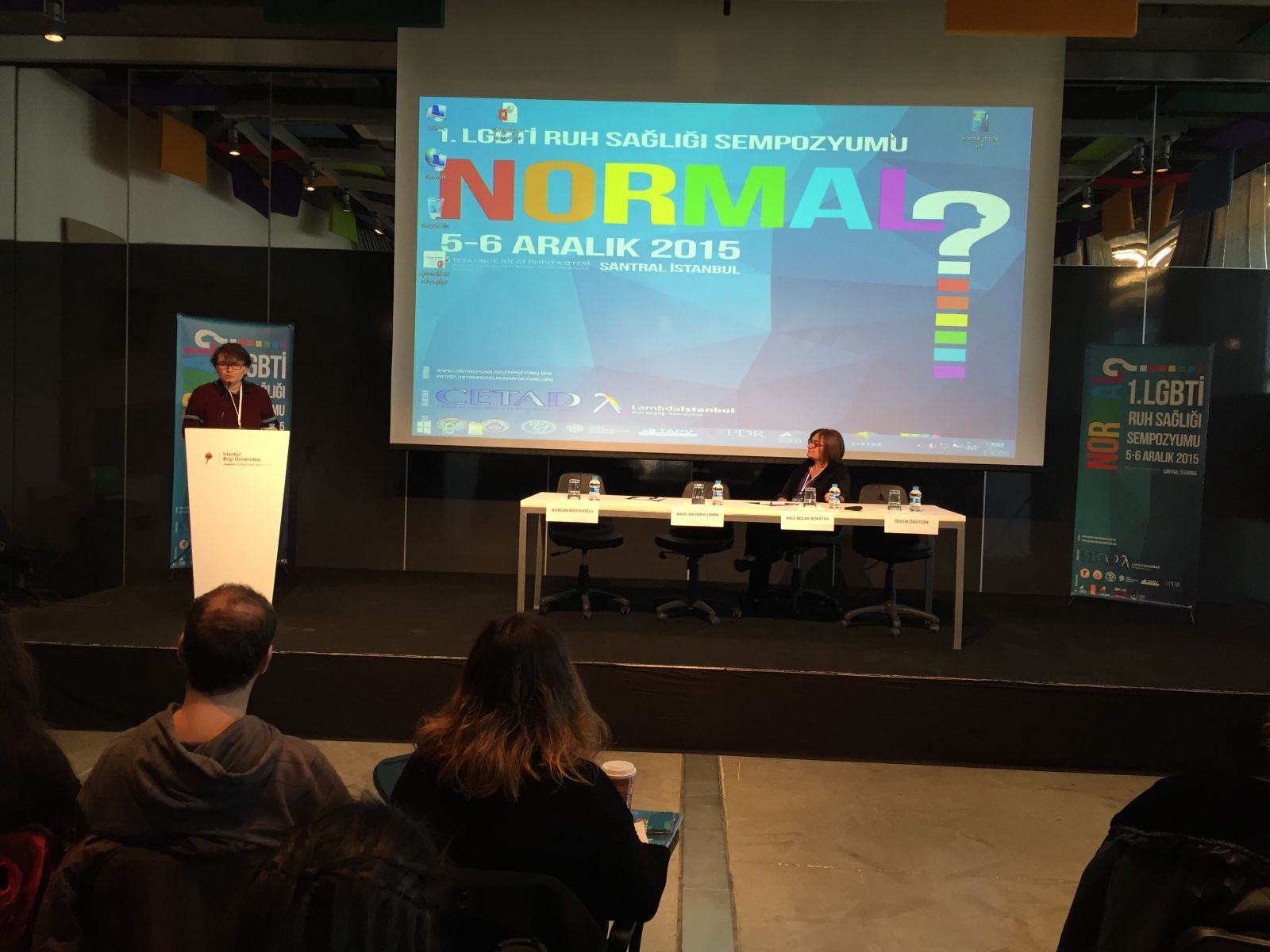 “Are we strong enough to take a step back and look to the disturbing scene?”

Psychologist Özlem Çolak from LambdaIstanbul LGBTI Solidarity Association Mental Health Commission mentioned the difficulty we get through as a whole and described it as “a time of in which we are deprived from our rights and forced to live between wars and bombs doubtfully.”

Çolak who states that normal and abnormal terms surround entire life and it is high time to question those terms:

“What is this Normal?

Özlem Çolak who talks on behalf of Lambdaistanbul LGBTI Solidarity Association Mental Health Commission, continues with the question of “What is this Normal?”

“The field in which we mostly get hurt and alienated is our sexuality as we are pushed between this normal-abnormal dead-end. There are lots of cultural and historical reasons why having sex without intention of reproduction is seen unethical and we are living under that misfortune.”

Özlem Çolak who have begun to work last year with Lambdaistanbul Mental Health Commission, states that the name of LGBT people is always changed throughout the history but their experiences never changed:

“The reasons why local reactions turned to a global resistance is because of the fact that sexuality does not exist in individual pathology anymore and it is taken to social sphere. Now we need to speak more than they give us and we have to.” 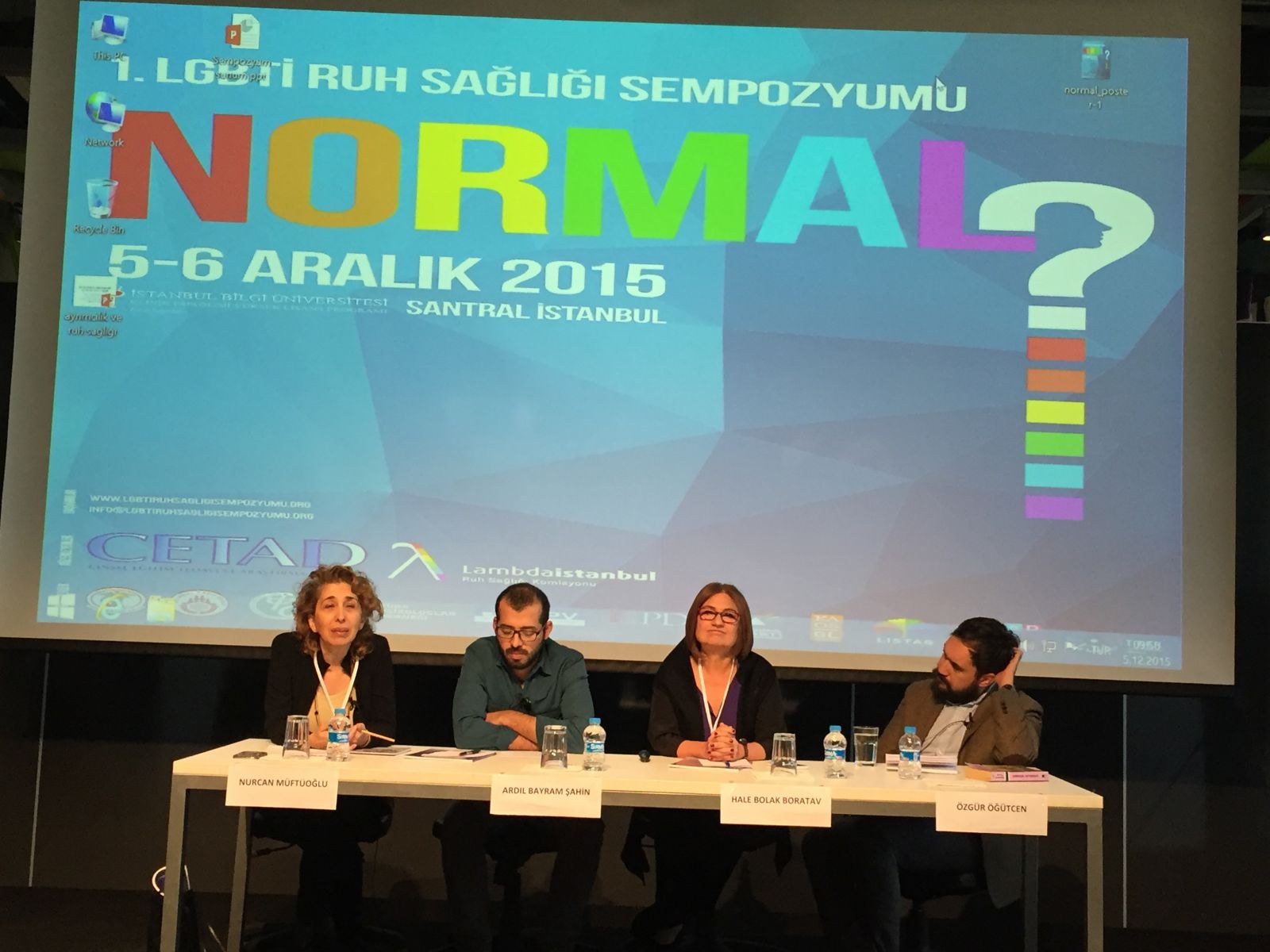 “We felt great as we speak the abnormal which gets ignored”

Psychiatrist Dr. Ardıl Bayram Şahin from the Regulatory Board of LGBTI Mental Health Symposium, said that “the existence of LGBTI is ignored and we felt great as we speak the abnormal which gets ignored.”

Şahin, after reminding the statement of Prof. Dr. Şahika Yüksel which is “we had a historical weekend,” he stated that “the participation to the symposium tells us that it was a long-felt need.”

Şahin expressed his gratitude to those who contributed to symposium via kaosGL.org and stated that “speaking something ignored for years, from another perspective, not only in terms of mental health but also with paying attention to the needs of society, is something which gives us hope. 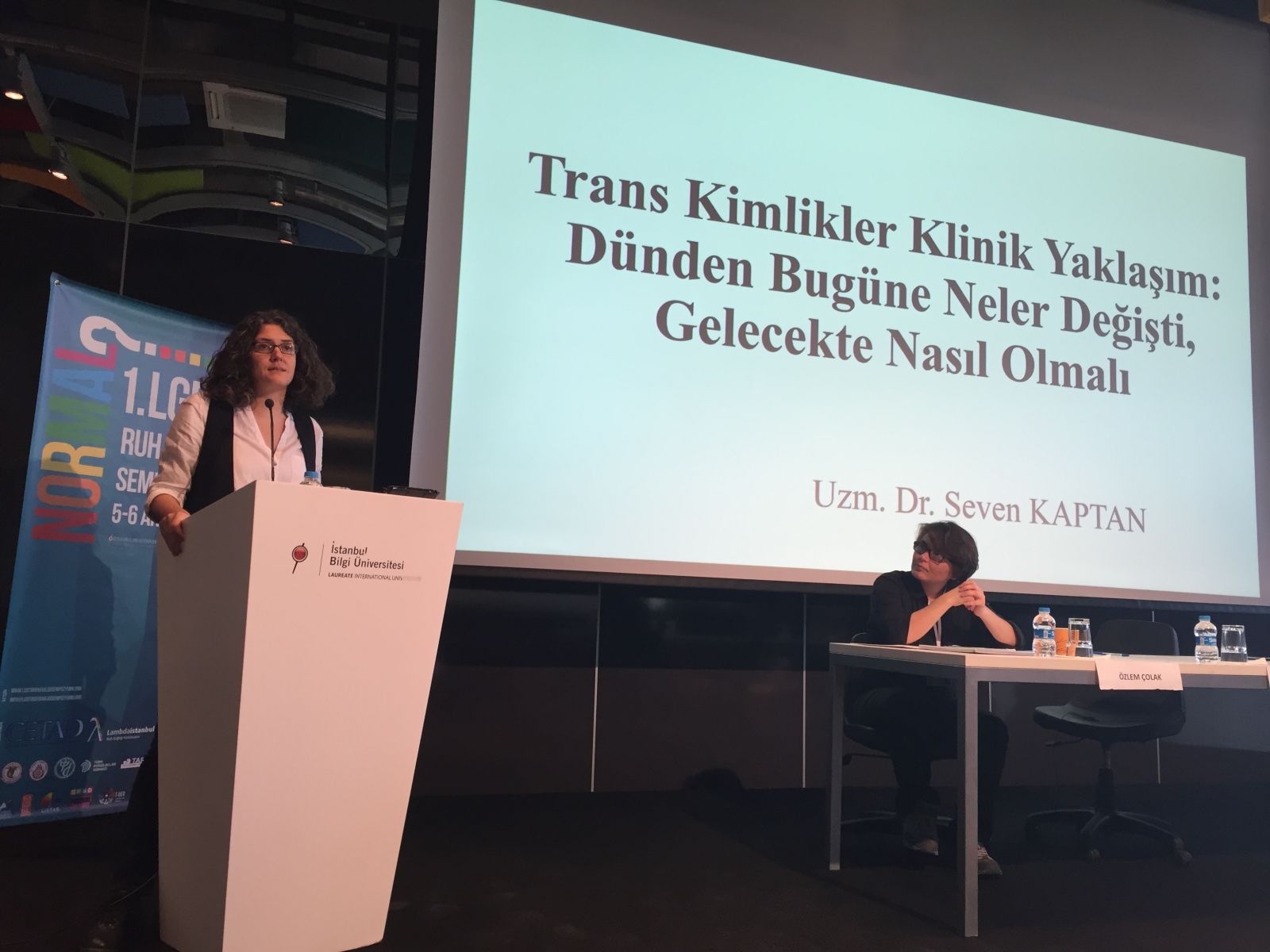 “I don’t know whether it’s because of we are young or the participants but it have been a delighted and dynamic symposium. Especially we are happy as we bring the associations who fights for LGBTI right for years such as Kaos GL, Lambdaistanbul and SpoD with academy.”

Afterwards Kaptan added that “the solution could only be achieved by works like this.” 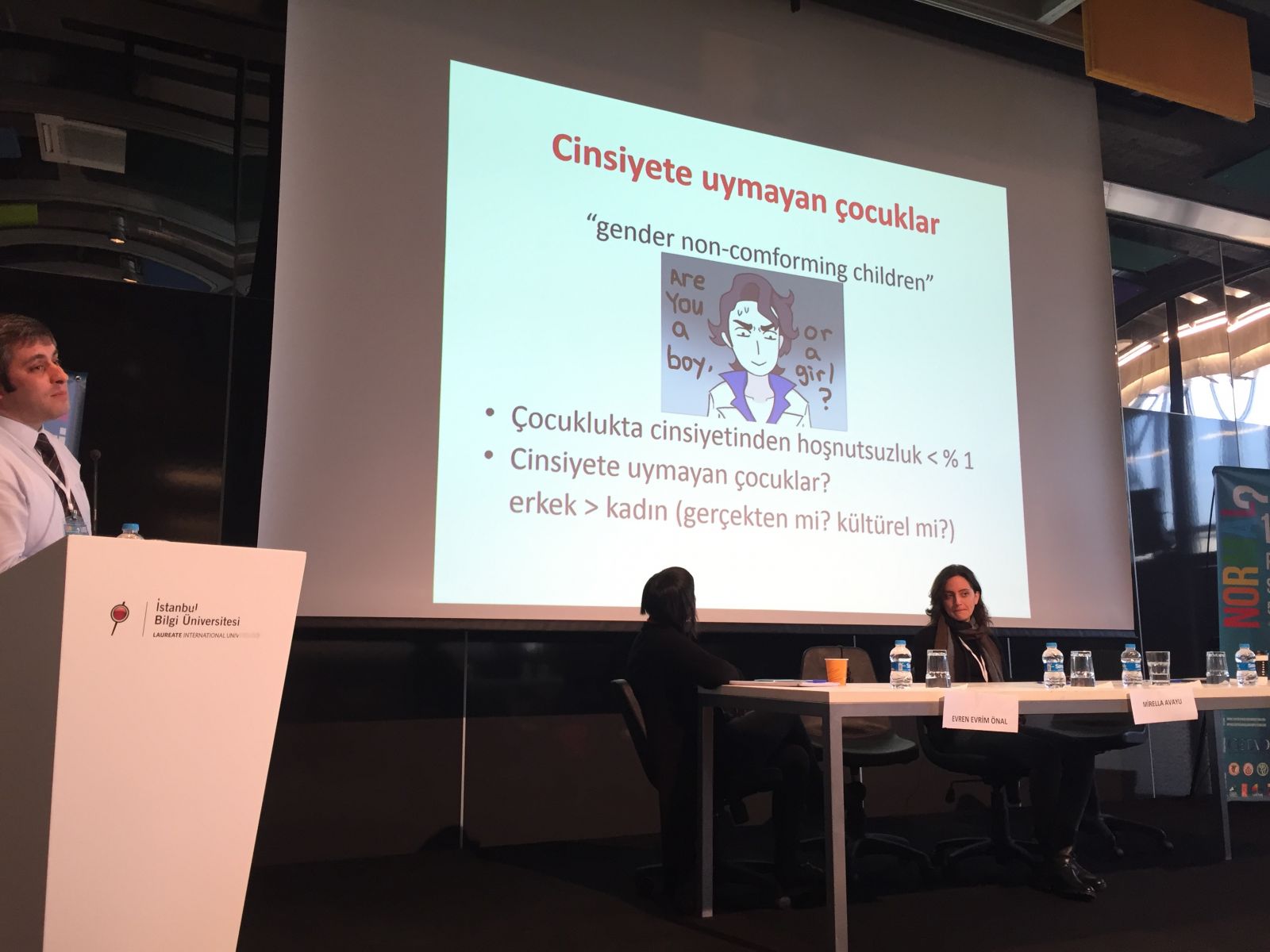 Psychiatric Association of Turkey representative Yrd.Doç.Dr.Koray Başar said that this symposium is a first in Turkey which brings the associations together who works for the mental health of LGBTI people with the ones who has the intent of working on this subject.

Başar: “We can see that the approaches of LGBT associations and related associations working on mental health have changed. Attendance, attention and richness of content shows that it’s high time.” 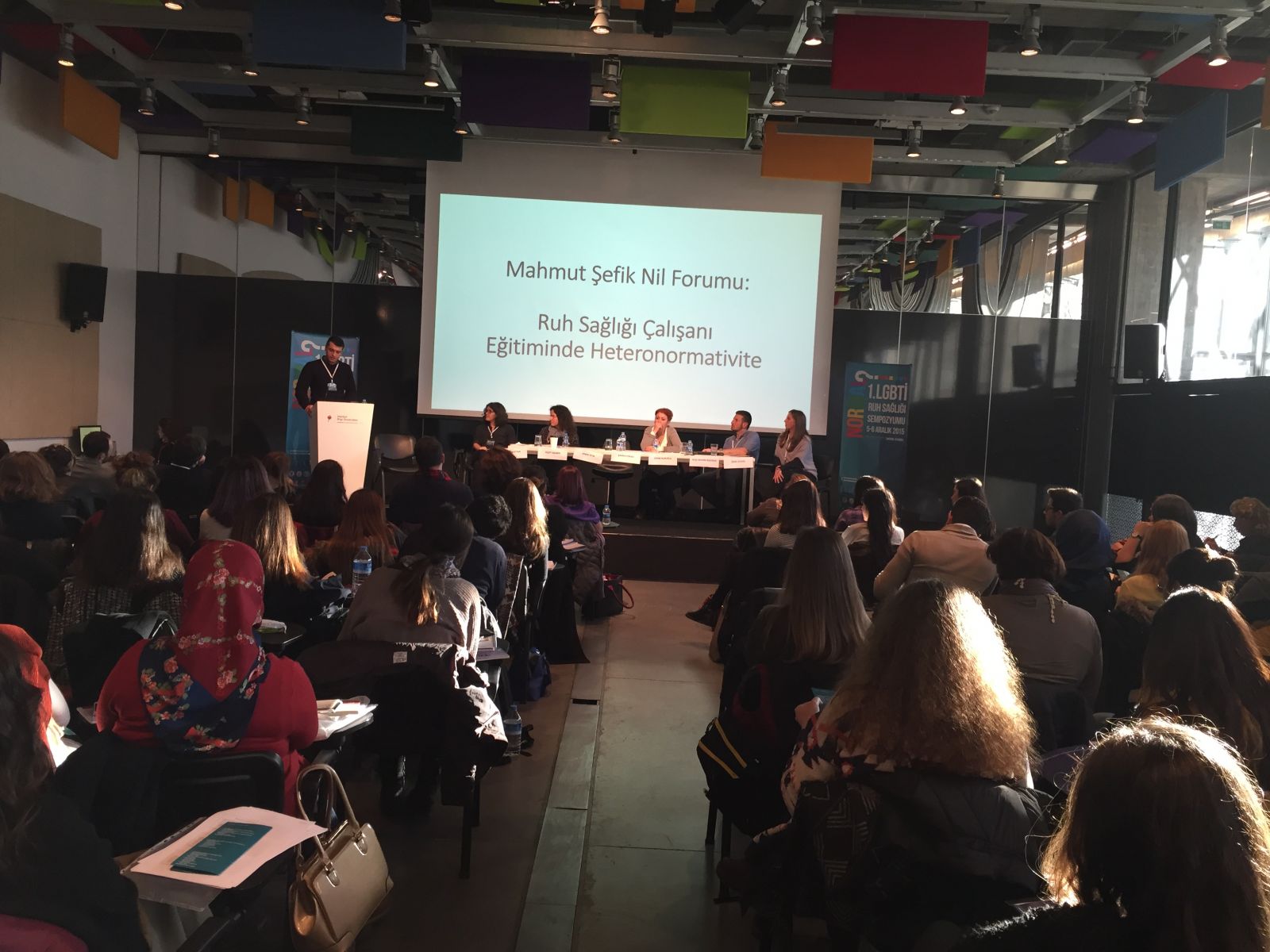 Dr. Koray Başar showed his appreciation to Dr. Şahika Yüksel and Dr. Nesrin Yetkin as they didn’t stop working even in the times when oppression was higher and commemorated Psychologist Mahmut Şefik Nil:

“We need to commemorate Psychologist Mahmut Şefik Nil in such a contentful environment where different associations take part. As it was understood in the forum organized in memory of Mahmut Şefik Nil, It is not hard to see that the future of the works on LGBTI mental health affects this movement as a whole.