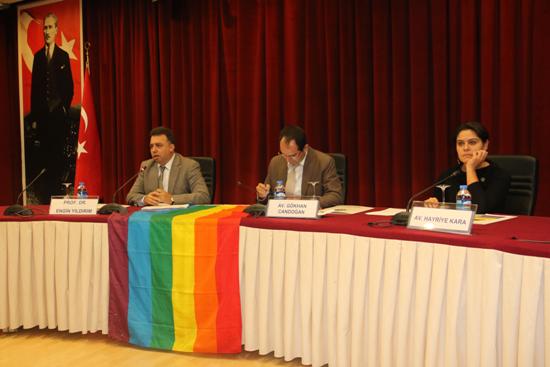 The Ankara Bar Association and Kaos GL Association organized a panel in the Ankara Bar Association’s Education Center on “Sexual Orientation and Gender Identity Equality in the Constitution” on 29 November 2013.
The panel was moderated by Gökhan Candoğan, a member of the the Ankara Bar Association Administration. Constitutional Court member Professor Engin Yıldırım and Kaos GL Association’s attorney Hayriye Kara participated as speakers.
“LGBT People’s Demand for Constitutional Equality is a Fundamental Human Rights Issue”
Engin Yıldırım discussed the global situation through examples of international judicial decisions regarding sexual orientation and gender identity and stated that the issue must be evaluated within the framework of fundamental human rights. Yıldırım stated that the issue has only recently entered the discussion in Turkey and said, “Social habits do not change easily, however, LGBT people’s demand for constitutional equality must be viewed as a fundamental human rights issue. The issue becomes a vicious cycle when ‘morality’ or ‘sickness’ are involved.”
“Law can open the path rather than waiting for society to reach a certain level”
Yıldırım emphasized social awareness and said, “I respect the associations that work in the field. When a community reaches a certain level of power, court decisions also change. This situation is clearly visible in women’s rights and racial discrimination in the USA. This means that once LGBT rights in Turkey gain some public support, this will be reflected in the legal spectrum. This is very difficult in a society where 70% of the public find this way of life to be incorrect.” He thinks that law “can open the path” and states that “we do not necessarily have to wait for society to reach a certain level.”
Yıldırım said, “I cannot search the term “sexual orientation” on my computer in the Constitutional Court” and told the audience that the Google search “sexual orientation and human rights” within the National Judiciary Informatics System lands on a “Unfortunately inaccessible” with reference to a court decision. He says, “I think this is really weird. Or when you search the words “homosexuality” or “gay” to try to access scientific articles within the National Judiciary Informatics System, again the system does not allow it. That’s also interesting. This means that I am personally having a lot of trouble with access. I do not really know who to consult about this problem.”
“It is the obligation of the State to protect fundamental rights and freedoms”
Kaos GL Association’s attorney Hayriye Kara presented judicial decisions regarding sexual orientation and gender identity in Turkey. Kara stated that while the State has to respect the inviolability of fundamental rights and freedoms, it also has the obligation to protect them. She stated that in nearly all Constitutional articles regarding fundamental rights and freedoms, the term “general morality” is included in the restrictive criteria and that these vague expressions coupled with the mentality in practice lead to serious rights violations. Kara pointed to the hate-motivated murders in Turkey and said, “the State does not take any steps towards protecting LGBT people’s right to life; there is discussion of legislation regarding hate crimes in Turkey but the biggest victim of these crimes, the LGBT people, are not even mentioned.” 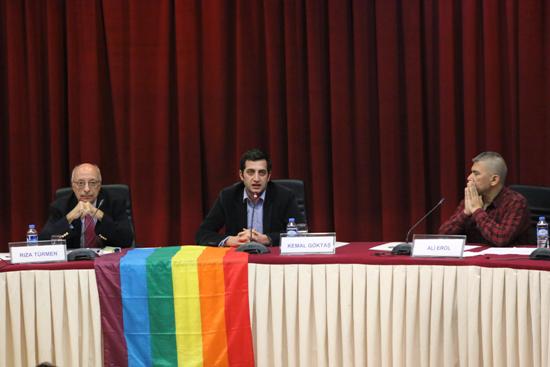