The Lambdaistanbul LGBTI Refugee Commission has released a written statement for the June 20th Refugees Day. 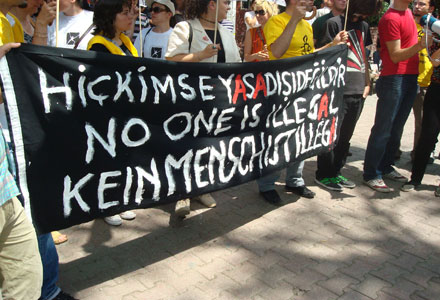 The Lambdaistanbul LGBTI Refugee Commission has released a written statement for the June 20th Refugees Day. The Commission, which listed the problems experienced by LGBTI refugees in Turkey and shared their demands, said that “LGBTI immigrants and refugees constitute the most invisible and disadvantaged group.”
The Commission reminded that immigration and asylum seeking has become part of everyday life and reported that “There are approximately 3 million migrants and refugees in Turkey, including the ones arriving from Syria. Numbers are important for states and institutions. However, what is most important for us is the multiplicity of lives and stories of the people; we ought to know that this number encapsulates people with distinct problems and needs.”
The Problems on the Ground
The Commission noted that LGBTIs are not listed as a protected group under the the Protection of Foreigners and Internationals Act that Turkey put into force last year. The Commission said:
“LGBTIs are not supported by their own people while living in a foreign country; experience double discrimination in the host nation on the basis of both their status as migrant/refugee and their sexual orientation and gender identity; are either unable to access or can access minimally the state support systems provided to migrants/refugees; cannot access the health care services that they need because of the prejudice that health care specific to their need is a luxury; and, similarly, face significant obstacles in satisfying basic needs, such as housing and education.
“Another significant problem resides in the attitudes of migrant/refugee-oriented NGOs, who, instead of prioritizing their needs, defer or outright neglect them in terms of access to the already limited resources of these NGOs.
“We are aware that the problems herein listed are familiar both to migrants/refugees and to LGBTIs in Turkey. However, ignoring the intersectionality of this experience and the consequent double discrimination works not to remedy but to worsen the situation. Even though the number of LGBTI refugees do not reach millions, the problems they face are significant.”
The Demands of the Refugee Commission
The list of demands to be met and steps to be taken as per the problems LGBTIs experience is as follows:
“Our first demand is for organizations that provide services for or produce policies towards migrants/refugees to immediately include the reality of LGBTIs into their services and policies, without ‘but’s or ‘maybe’s, and to bring the topic of LGBTIs to the agenda both in their service fields and/or in the efforts they carry out in cooperation with the state institutions.
“We also demand for the state to incorporate LGBTI refugees as a protected group under the Protection of Foreigners and Internationals Act and to take necessary precautions to guarantee their equal access to services.
“Our most crucial demand, which is directed towards LGBTI organizations in Turkey as well as ourselves, is for them/us to seize perceiving migrants and refugees as a topic and field of study and to begin recognizing them as [our] colleagues and comrades, on equal footing, towards organizing and producing discourses on our realities.”
Translated by: LGBTI News Turkey