‘It turns out that in order to be a whore in this country, I had to pay money to the state within the framework of the Law of Misdemeanors, grease the palms of the mafia as well as the police and at times, sleep with people for free.’ 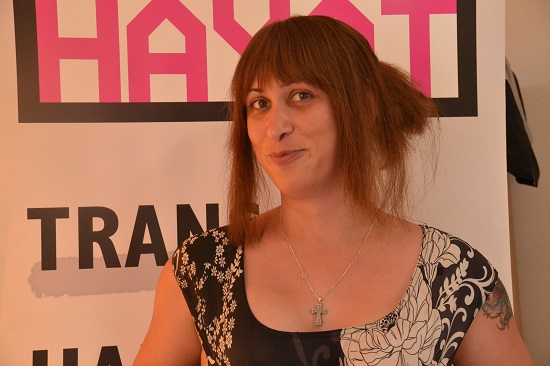 “It turns out that in order to be a whore in this country, I had to pay money to the state within the framework of the Law of Misdemeanors, grease the palms of the mafia as well as the police and at times, sleep with people for free.”
Below is the interview we conducted with Demet Yanardag, from the Black Pink Triangle Association in the western city of Izmir, where she recounts the difficulties she faced in her working life as well as the intricacies of sex work.
Yanardag explains that she chose to study tourism and hotel management at university thinking that this was a relatively easy line of work where she would not be discriminated against. However, she tells that things did not work out quite as she thought.”
“Men think you are a sex doll”
“I thought that someone like me could work in the tourism industry, that I wouldn’t encounter people judging me. I graduated and soon found out that this would not be the case. Not a single hotel would hire me as an intern. I couldn’t find an internship. Then, a close friend of mine arranged for me to start interning at a five-star hotel. During my internship, both the hotel clients and the staff harassed me incessantly. People kept offering sexual relations in a way that could be considered harassment. That’s when I understood that if you are a trans individual, you have to be a sex worker. If you are employed in other lines of work, you will be harassed much more so than cis women. People see you as a potential sex doll. When men get boners, they see you like sex dolls they could use to satisfy themselves.”
As Yanardag was continually harassed by hotel clients and staff, she thought to herself, “society allocates this role to me; I must be a whore.” Here is how she decided to become a sex worker:
“It’s not easy being a whore…”
“I continued working at the hotel after graduation. The tips I acquired amounted almost to hundred times my salary. My sales at the bar were very high. I could entertain someone at the bar and sell them the most expensive cocktail. They did not want to let me go since I increased the revenues at the bar. On the other hand, I was fed up with the harassment. So I thought, instead of sleeping with the manager or the bellboy, I could sleep with whomever I wanted and make more money. But that wasn’t going to be quite so smooth either. Because it turns out that to be a whore in this country, I had to pay money to the state within the framework of the Law of Misdemeanors. To find clients on the street, I had to pay off the mafia. Moreover, I had to sleep with the mafia for free from time to time. And the police too… Some policemen would just flip their dicks out, telling me ‘come on suck it.’ It is not so easy being a whore. Actually, it’s harder than some ‘honorable professions.’”
Yanardag regrets having quit her job at the hotel. She says, “I wish I stayed at the hotel and became a part-time sex worker” and adds:
“Easier said than done: Making money lying on your back”
“I could both work at the hotel and as a whore. When the clients hit on me, I could tell them, ‘sure, for 100 TL’ instead of turning them down. That way, I could avoid dangerous situations. Instead of having to deal with strangers on the street or online, I could sell a few drinks, go to bed with the guy and become a part-time sex worker. You live and you learn. People think we make money lying on our backs. That is easier said than done. I invite those people to give it a shot.”
Yanardag explains that she is becoming more and more aware of the dangers of sex work as the years pass. She says, ‘You get to know by looking at someone’s face, if they are dangerous or not. You begin to guess whether the person whose car you get in carries a gun or a knife.’
*The full interview with Demet Yanardag may be found in the book entitled “We Can’t Get Enough Trans” (“Dönmelere Doyamadık”) scheduled to come out on November 20th. The book will also feature interviews with five trans women, from five different cities, who participated in the Pink Life Trans Women’s Camp, discussing issues including social rights, work life, education, health as well as the women’s life stories, their problems, demands, proposed resolutions and relations with the state.
Translation: LGBTI News Turkey