METU Pride March trials: Our students were beaten but now they are on trial!

METU LGBTI+ Pride March trial is adjourned to July 10. At the hearing, academicians that witnessed the attack described the police violence: "Our students are beaten down by the police and I don't understand this case!", "The police have wanted us to go so that they can beat them more." 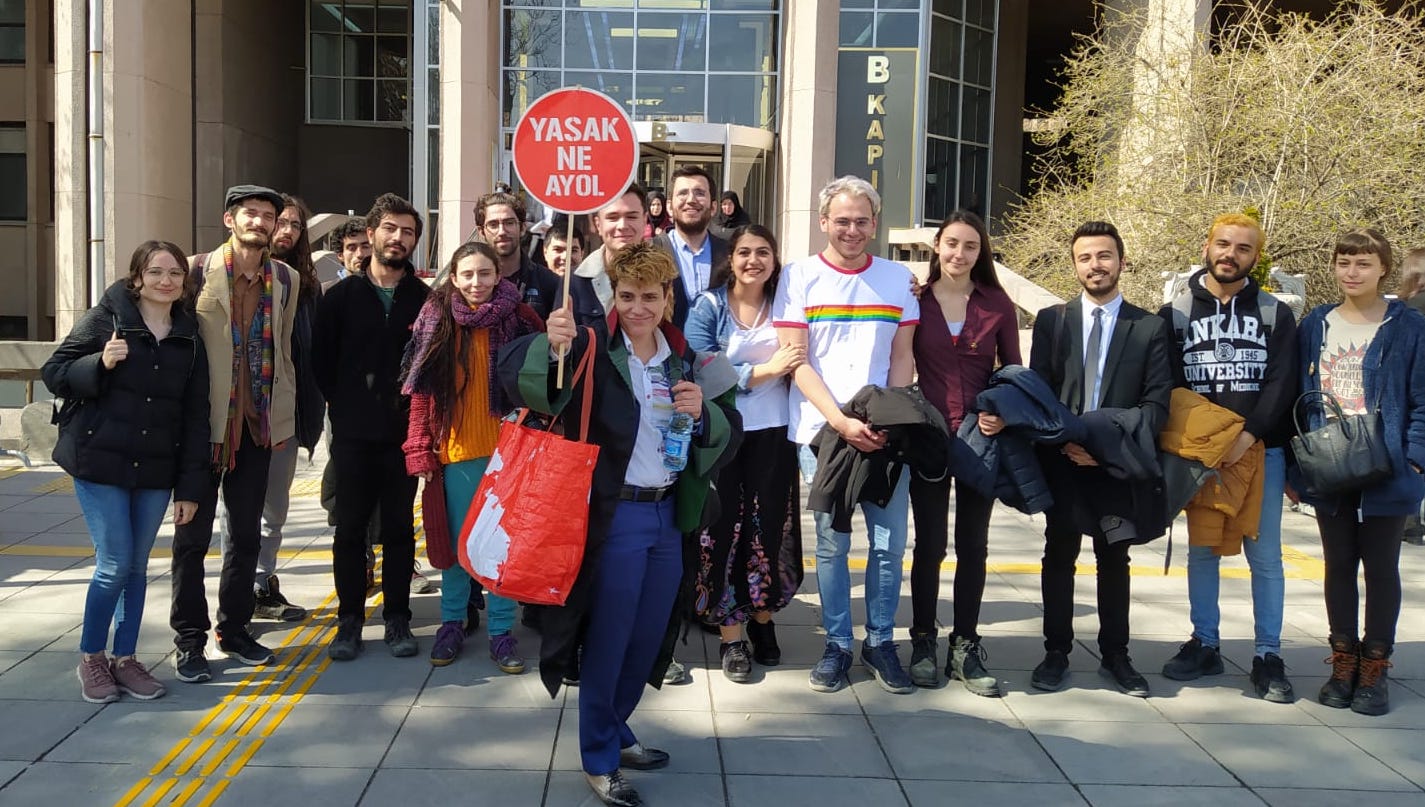 The second hearing of the case, which was opened to 18 students and an academic from Middle East Technical University (METU) on the grounds that they participated in the LGBTI+ Pride March on campus on May 10, 2019, was on March 12, 2020, at Ankara’s 39th Criminal Court of General Jurisdiction.

The hearing was monitored by the Embassies of the United States, Germany, Belgium, Netherlands, Spain, Canada, and New Zealand, as well as Amnesty International and the Kaos GL Association.

The lawyers requested an immediate acquittal. Otherwise, they have requested the renewal of the wrongly prepared expert report, re-request of the raw footage from the police, which was previously requested but was not handed, related police officers to be heard and trials to be heard in a bigger courtroom.

Police refused to hand in the raw footage

LGBTI+ rights advocates have requested the raw footage that covers the police violence at the first hearing. But police failed to deliver the footage. Öykü Didem Aydın, the lawyer of the rights advocates said, “As we stated between the hearings, the two points are very important here: the expert report was not prepared in accordance with the interim decision. We request a different expert or previously requested footage to be delivered to the appointed experts. The second point is the footage delivered by the Police is the same as the footage examined at the first hearing. We request that raw footage to be requested again. The moments of detention of many defendants are not included in the footage. We request unassembled footage  showing the moments of detention of all defendants.”

Att. Aydin requested that the English documents related to the case be translated by the expert, presented their own translations, national and international norms, documents and explanations, and the Supreme Court's decisions on the subject to the court. The United Nations Commissioner for Human Rights has requested that the letter which was written by five special rapporteurs regarding the METU Pride March case and LGBTI+ rights in Turkey to the Republic of Turkey be translated into Turkish. The letter mentions arbitrary detentions and discrimination.

Academician Gökmen: Students would hold a non-violent demonstration if the police were not to come

Then the witnesses were taken to the courtroom. İnci Gokmen, a retired academician from METU Chemical Department, who was among the witnesses, shared their testimony about what happened on the day of the march:

"I was in the chemistry department. I heard voices, I went out. In general, the police don't go all the way into METU. I've seen cops everywhere. That's not cool. Life is going on normally in the campus. Negotiations were held with the police in previous years, but this year even that was not possible. After all, it's a nonviolent march. If the police hadn't arrived, the students would have walked non-violently and dispersed. We got gassed in the library, we took a hell of gas. We saw the students taken in custody. A student who was about to take his exam in front of the Civil Engineering department was beaten and detained. I don't approve of this kind of violence. They should be able to hold such demonstrations under the Constitution. If it wasn't for the police, it would have been an event that would have ended in two hours. There was gas all around. I've witnessed police violence, and I'm uncomfortable with it.

Barış Parkan, a professor from the Department of Philosophy, described the police attack as follows:

"I didn't hear any disperse call. Police quickly and furiously gassed the students. Then I saw the students leaning against the wall by the police, getting searched harshly. They even kicked a student in the foot. When we reacted to the police, they said, "You guys get out of here too." They wanted us to leave so that they can beat the students some more. At some point, an agreement was reached to go to the Trio Lecture Amphitheater, but the police did not even allow the students to walk hand in hand. They took the kids by beating them. They shot at the children's feet. It was a very angry and harsh environment."

Att. Mahmut Şeren: It passed as a violation to the human rights report of Turkey

Mahmut Şeren, one of the lawyers of LGBTI+ rights defenders, said:

"There is an intervention that commenced without the occurrence of the preconditions required by law. They made the call to disperse while shooting a persons feet with rubber bullets. The expert report created a scene as if there were faculty members trying to deal with the outburst of students, but as we can see from witness statements, this does not reflect the facts. This incident passed as a violation to the human rights report of Turkey. Turkey was also criticized regarding LGBTI+ rights at the United Nations' Universal Periodic Review meeting. We want to avoid further breaches in this case and request an immediate acquittal. On the other hand, the failure of the Police to send raw footage shows that public resources are wasted, our right to defense is restricted, and frankly, the Police do not take the Court seriously."

Att. Sevinç Kocaoğlu stated that their clients had no action against the law and demanded an immediate acquittal.

Scholarships and loans were also cut for detained students

On the other hand, the Credit and Dormitories Institution (KYK) under the Ministry of Youth and Sports cut off the scholarships and loans of the students detained at METU LGBTI+ Pride March on May 10th and also demanded immediate repayment.