METU Pride marchers who were previously taken into custody are now sued!

Students and academicians who have been detained by the police with excessive violence during the METU LGBTI+ Pride March are now sued. 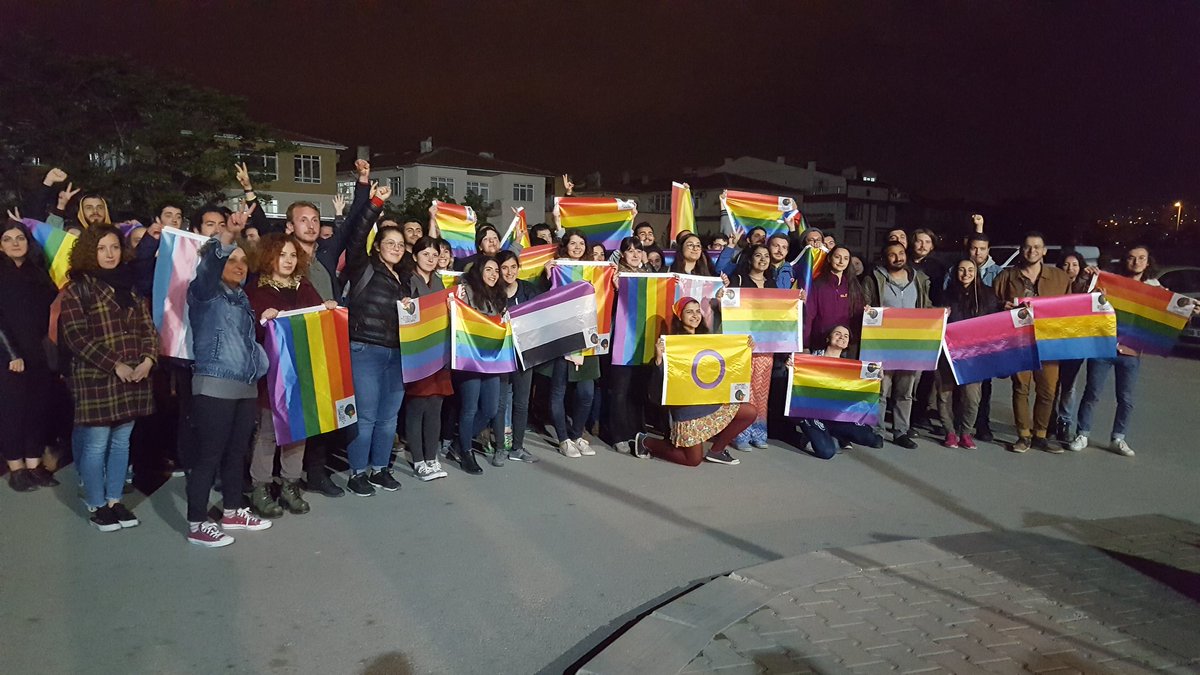 Students and academicians who have been detained by the police with excessive violence during the METU LGBTI+ Pride March are now sued. There is no trace of legal action regarding the police violence.

Photograph: After the release of the 19 students and academician who has been detained at the METU Pride March. Yıldız Tar/Kaos GL

19 students and academicians who have been detained at the 9th METU -one of the oldest universities in the capital of Turkey- LGBTI+ Pride March, are sued.

The prosecution accused the 19 people who have been detained by police violence with the defiance against the Turkish Penal Law’s no 2911, Law on Assemblies and Demonstrations.

The Prosecution Office has turned a blind eye to police violence: “Proportional Force”

In the accusation, the excessive violence that police have used against the students and academicians has been recorded as “detained with proportional force”.

Also, statements like “All suspects insisted on not to disperse despite all warnings and the use of force by the officials”

The prosecution also accused a student with “insulting an official because of their office”.

Ankara’s 39th Criminal Court of General Jurisdiction has decided to commence after examining the accusation.

No action taken against the police who attacked the students!

At the METU Rectorate’s request, police entered the METU campus and attacked the 9th METU LGBTI+ Pride March with pepper spray and plastic bullets. More than twenty students and one faculty member were arrested, all of who were released in the late hours the same night.

On the 13th of May, in order to demonstrate the students’ continuing rights to their own university, a symbolic resignation ceremony for the rector was organized. On the 14th of May, to protest the police violence on the campus, a general boycott of classes was begun.

Until today, no actions have been taken regarding the police attacks on the students and faculty.

Student loans and scholarships of the detained students halted

The Youth and Sport Ministry’s Credit and Dormitory Institution (KYK) cut the scholarships and credits of those students arrested at the METU Pride March on May 10th.

The Students arrested were informed by mail of KYK’s decision of to cut the students’ funding upon receiving a letter from the Ankara Provincial Security Office. Furthermore, KYK also demanded the payment of any institution loans from any of the affected students.

What does Turkish Penal Law no 2911 says?

According to the 3rd article of the Law on Assemblies and Demonstrations, TPL no 2911; “Everyone has the right to assemble and demonstrate unarmed and unaggressively, without prior permission, for certain purposes which are not considered crimes by law, in accordance with the provisions of this Law.”

The 12th article of the law lists the responsibilities of the Organizing Board as follows:

What does ECHR say?

There is the precedent case of Alekseyev vs Russia on the prevention of the Pride March in Russia and the attack against the march. The ECHR has decided the prevention of Moscow Pride March 2006, 2007 and 2008 are clear infringements of the article 11. ECHR has stated that investigating if these prohibitions are based on legitimate causes or if these decisions are regulated by law is not needed in a democratic society and underlined that the 11th article includes protecting the demonstrations against the attacks from the people that may hold grudges against the aims or the subject of the demonstrations. Court has repeated its decision that the existence of a risk is not enough to ban a demonstration, and officials have to take measures against any potential attacks.

In a similar way, the ECHR in the case of Identoba and Others vs Georgia evaluated the violence, fear, and humiliation felt by the LGBTI’s during the demonstration as a breach of the 3rd article, in the scope of the ban on discrimination, in accordance with the 14th article. The court has underlined the attack on the march in May 2012 is a breach of article 11 and stated the officials could not protect the appealers’ right to assembly and demonstration from the prejudiced violence and this is a breach of article 11, together with the articles 3rd and 14th. The court has stated the officials were noticed 9 days prior to the demonstration, the timespan was enough to take measures, ensuring the protection of the demonstrations is a responsibility of the state, and the state could make public statements on toleration or on the legal repercussions against an attack on such a demonstration.