Wolfgang Wilhelm from the Vienna Municipality - Anti-Discrimination against LGBTI+s Bureau will speak at Kaos GL’s event. Don’t forget to register! 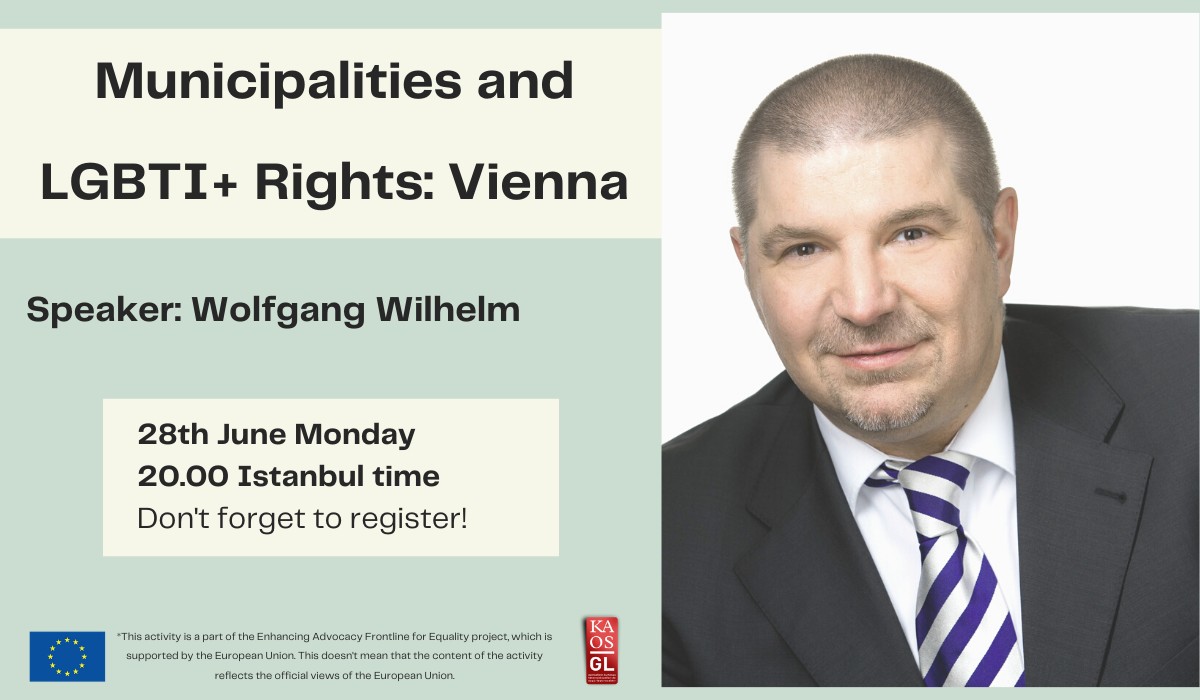 The fourth of the event series organized by Kaos GL in the field of local governments will take place on 28 June at 20:00 with Wolfgang Wilhelm from the Vienna Municipality - Anti-Discrimination against LGBTI+s Bureau, which sets a global example in terms of gender and local governments.

There will be simultaneous Turkish-English translation at the event.

What will be discussed at the event?

Wilhelm will cover the following topics within the scope of the event:

- History of the Vienna Anti-Discrimination Bureau against LGBTI+s

- The main duties of the bureau

- Funds for LGBTIQ projects in Vienna

Who is Wolfgang Wilhelm?

Wolfgang Wilhelm, Mag., MAS, MSc, was born in 1971 and studied social sciences at the University of Vienna. In addition to being the Director of the Vienna City* Office for Combating Discrimination against LGBTI+s, they also works as a psychotherapist, sex therapist and coach.

What were the other events in the series?

The first event was held on Friday, May 28 at 20:00 with the title “Municipalities and LGBTI+ Rights: Examples of South and Central America”. Esteban Paulon, independent consultant to the United Nations (UN) on trans rights, spoke at the event. Talking about good examples and touching on local/global studies, Paulon shared examples from Argentina, Colombia, Mexico and Uruguay with the participants.

The second event, titled “Municipalities and LGBTI+ Rights: Human Rights Cities”, was held on Tuesday, June 1 at 20:00. The second guest of the event, which was held with the aim of strengthening the literature and resources in the field of local government within the scope of the Advocacy for Equal Rights Project, was Bahar Özden who has been working on human rights, international local government collaborations, local democracy, capacity building, participatory planning, gender equality, and local equality action plans in the Union of Municipalities of Turkey since 2005 and then in Çankaya Municipality as well as managing the Human Rights Cities Project at the Raoul Wallenberg Institute for Human Rights and Humanitarian Law since 2018. In the event moderated by İlknur Üstün, one of Kaos GL's local government consultants, Özden made her presentation in the context of human rights cities.

The third of the online events organized by Kaos GL to shed light on good practices in local governments and strengthen the resources in the field was held on 3 June with the participation of Yüksel Mutlu, with the title "Local Governments Serve Everyone". İlknur Üstün moderated the conversation. Mutlu, who came from the human rights and feminist movement, gave their speech; “Do local governments serve everyone?” They started by asking the question to the participants. Mutlu, who was the co-chairman of the Mediterranean Municipality until the trustee came, shared their own experiences with the participants within the framework of the question he asked.