Murathan Mungan: They wanted to kill the language of peace

On the 8th anniversary of Hrant Dink’s assassination, poet and playwright Murathan Mungan spoke to the crowd gathered for the commemoration ceremony yesterday. 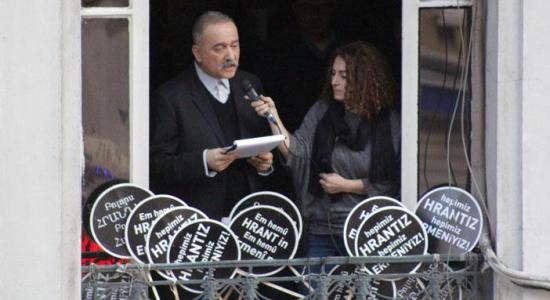 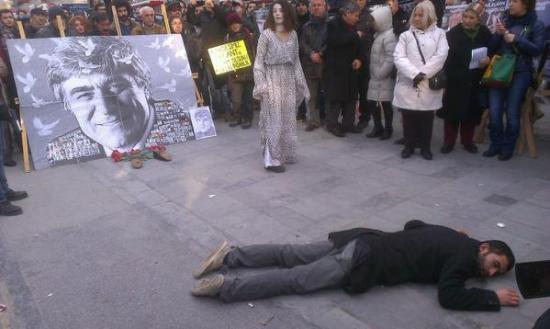 Photo: Tiyatroj, Ankara / Gunes Gumus
This is why we who have been raising our voices for Hrant, for justice, no longer want a caricature of democracy, but democracy itself. We urgently demand democracy and unconditional freedom of expression. We do not want the sham democracy of obscurantist tricks staged behind closed doors, but a democracy of daylight. We want a democracy which makes no concessions on secularism. We want to live in a society where no one is thirsting for the blood of others, where we can live without being or making victims. We want to live in a country where women are not murdered, where trans-individuals and gays are not killed, where children are not massacred by government bullets almost every day. We want to live in peace, brotherhood and solidarity in a society where all kinds of ethnic, cultural, religious or gender-based discrimination have been done away with, where no one interferes in one another’s lifestyle, language, religion, confession, beliefs or non-beliefs, where everyone enjoys their rights as equal citizens, where citizens have attained democratic maturity. We want to live as people who respect the right to life of everyone and of every living being, of trees, of water, of parks, of woods and of forests. We want to live our lives as a multi-lingual, multi-cultural, multi-coloured people. We are unconditionally opposed to all forms of tutelage and we do not want to have to make a choice between the shoulder straps of the 12 March, 12 September coups and a moderate vindictiveness, a tie-wearing bigotry. 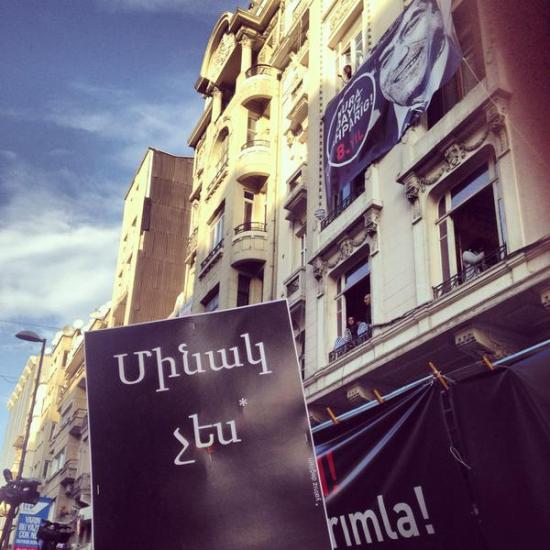 Photo: Can Memis / Istanbul (*You are not alone)
If we stand here today to say “Je suis Charlie Hebdo” in defense of the freedom of the press, we do so, unlike some others, with the clear conscience of those who took to the streets in protest when the “Ozgür Ulke” (Free Country) newspaper was bombed in Istanbul in 1994.
Friends, with Hrant Dink’s deaththis country not only lost a valued son, it also lost one of its eminent journalists. At a time when journalism is losing its dignity in great measure, his loss and the loss of other journalists like him is bitterly felt. This in itself is reason enough for us to own up to Hrant Dink’s fourth child, the newspaper “AGOS” and its legacy.
I sincerely wish that the truths for which Hrant Dink and others like him laid down their lives will, in a not too distant future, become ordinary realities not even worth mentioning in a democracy bathing in daylight, in a society living together in peace!
I also wish that justice will come about in a near future and that those who will reassemble here in coming years will do so not to seek justice and rights which remain in waiting, but only in remembrance of Hrant and of memories of him.
In concluding my words I would like to lovingly embrace all members of the Dink family, and greet you all once again with deep affection and respect. (AGOS)