On May 1, LGBT Individuals Were on The Streets in Seven Cities

Lesbian, Gay, Bisexual and Trans individuals (LGBT) who participated in May 1 together with their rainbow flags were on the streets in Ankara, İstanbul, İzmir, Eskişehir, Diyarbakır, Kayseri and Balıkesir. 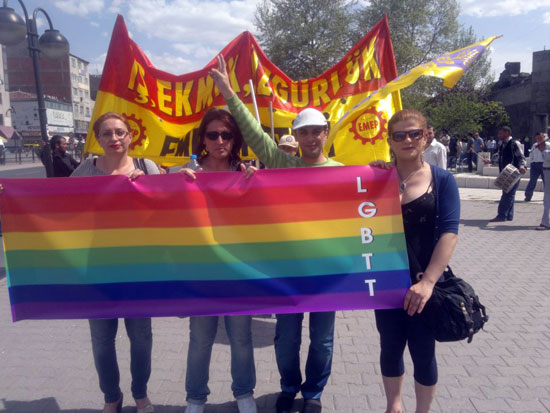 Lesbian, Gay, Bisexual and Trans individuals (LGBT) who participated in May 1 together with their rainbow flags were on the streets in Ankara, İstanbul, İzmir, Eskişehir, Diyarbakır, Kayseri and Balıkesir.
Members of Kaos GL and Pink Life who participated in May 1 in Ankara together, marched against homophobia, transphobia, hatred and discrimination and violence of any kind.
In the May 1, the posters “We Will Not Surrender to Heterosexism!” “Either Equality or Nothing!” “We Want a World without a Boss and Pimp!” are opened, rainbow flags are waved in the streets of Ankara. “Taliga Ritim Şugariyeti” who beat out a rhythm during the entire demonstration, stirred up the opponents of homophobia and transphobia.
Anti-Authoritarian Groups Marched Together on May 1 in Ankara
The co-March of Anti-Authoritarian Groups, having become a tradition, took place this year as well.
This year "The Other Bicycle" group also participated in the co-organization. And Ankara Anarchy Initiative and Anarchist Communist Collective participated with black flags together as well. The anti-authoritarian line where 17th of May Anti-Homophobia Initiative composed of members and friends of Kaos GL and Pink Life and then Feminist(B)iz followed the placard of fans of the sport club Gençlerbirliği with the placard “Kaba Hat’ımız Sanatçı Olmak” (Our Mistake is to be Artists). This year “Iran Left Wing Student and Youth Council” also participated in the demonstration of the 1 May in Ankara with the Turkish and Persian posters “Long Live the Union of the World Working Class”.
LGBT’s were in Seven Cities on May 1
After Ankara, Istanbul, Izmir, Eskişehir, Diyarbakır Lesbian, Gay, Bisexual and Trans individuals (LGBT) opened rainbow flag in Kayseri and Balıkesir out in May 1.
May 1 is an important milestone as to the LGBT struggle in Turkey. The process starting in Ankara in 2001 with the poster “Kaos GL-The Voice of Homosexuals” reached to seven cities where rainbow flags are waved and demands of LGBT people ascend. Hebun LGBT group carried the “We Want the Right to Live!” poster on May 1 in Diyarbakır.
Just as Hebun in Diyarbakır, the sex workers participated in the May 1 together with MorEl and carried the poster “Trade Union to Sex Workers.”
Morel having participated in the demonstration of the May 1 together with the Socialist Feminist Collective (SFC) carried the co-poster “We Are Out against Patriarchy, Capitalism, Homophobia, Transphobia!” And Izmir Black Pink Triangle Association participated in the demonstration with the poster “May 1 the Celebration of both the Sex Worker and the Laborer!”
The Lesbian, Gay, Bisexual and Trans organizations in Istanbul participated in the demonstration with the joint call “On May 1, on Taksim Square against Homophobia, Transphobia and Capitalism!”
Related news: http://www.kaosgl.org/sayfa.php?id=11197