“Our censored trans lives: But we exist in life and also on social media!” 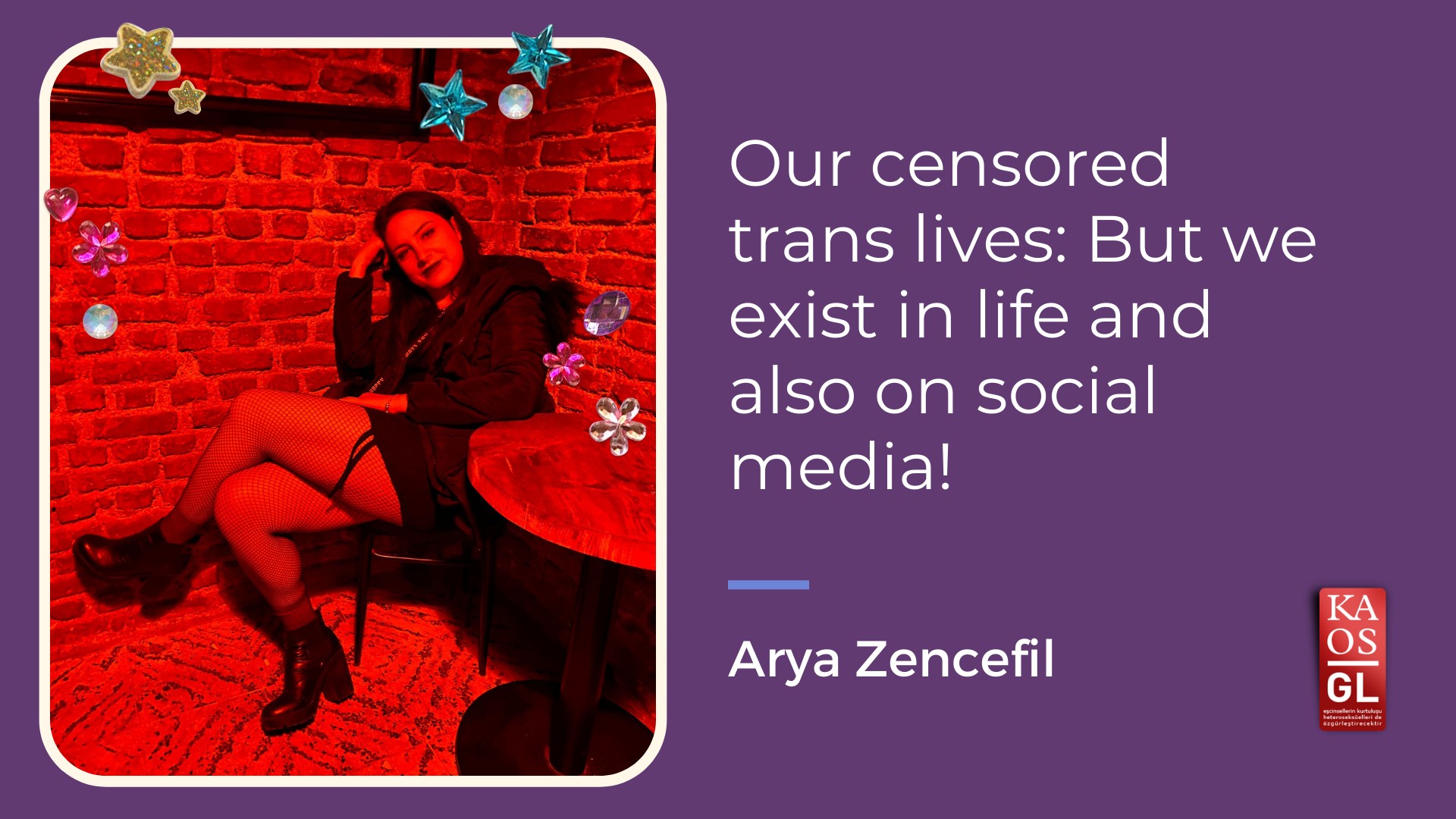 If you start to laugh when somebody tells you “You are not a woman so you cannot be a mother” and Nalan interrupts you with the song “Yaralandımmmm, yaralandımmmm…” (I got a bloody nose)…

If the song Butterfly in the Sky starts to play and you dance looking strangely while your relatives insist on saying “you are a boy” although they had blamed, you for “being like a girl” when you were a child?

Although we cannot respond to prejudice and hatred we face in our daily lives, to the point of this much absurdity; Arya definitively does it via her Tiktok account. On the one hand, she gives an answer to the question “Why do trans people want their gender confirmation surgery expenses financed by the states?” On the other hand, she counteracts against transphobic “jokes” with a joyful and humoristic manner.

We met together with Arya due to March 31, Trans Visibility Day. We talked the trans+ visibility at social media through her activism.

Because social media is a platform that overcomes and breaks down the censorship barrier against LGBTI+s at the traditional media in Turkey. Therefore I try to use all kinds of popular media.

“As if trans and queer lives do not exist”

Would you like to speak of censorship at the traditional media?

Surely… In recent years, there has been hard-core censorship related to LGBTI+ existence in newspapers, magazines and TV channels, which are formerly known as mainstream media. LGBTI+s cannot take place at these platforms except being targeted. I mean Pride Marches, files suited against us due to our existence or our daily lives… None of them takes place at the mainstream media.

In short, it is our lives that are censored. As if trans lives, queer lives do not exist. Such a pitch that, we cannot even see the news titled “travesty violence” much the same as 2000s, they want to draw the curtain over us but naturally we do not disappear.

Consequently, we cannot find a place of our own.

Is social media safe from this censorship?

Naturally not always, but there is not a hard control mechanism at social media as traditional media. We may make ourselves heard and we may reach similar voices via these platforms.

On the other side, since the policies of social media companies based on human rights, which have become mainstream in Europe, LGBTI+s are considered as minority under protected status.

We cannot say that these platforms are always liberating, however they usually provide our speeches and contents safety and give us a room.

Apart from the liberation potential of social media, these are big companies…

Surely, each of them considers margin of profit. I mean they give a room however their main purpose is surely their earnings. For instance, Netflix unfurls rainbow flags in United States of America in June, however, it keeps its’ silence in Turkey due to discriminatory policies and speech. Likewise, Leauge of Legend (LoL), announced its’ pride-related content, which went on throughout Pride month, as “celebrate the Color Festival with (their) entire community” without mentioning Pride specific to Turkey, on May 17, the International Day Against Homophobia, Biphobia, Interphobia & Transphobia.

Social media is also just like this. Capitalist mediums collect our personal data and they sell them. TikTok, which is known as Douyin in China, is bounded up with Chinese government and they ban “sissy men and other abnormal aesthetics” from appearing on television. In brief I am going for using social media functionally, we cannot trust them blindingly, we are not totally safe.

How long have you been carrying out social media activism?

I began social media activism in 2020, with epidemic. My transition process also began at this period and I also came out to my family during this time. Of course it is not a coincidence, while the streets were closed under color of Covid-19 epidemic and we were imprisoned within our homes, social media was the only thing we had.

How about your strengthening contents, do they also strengthen you?

Sharing contents, reaching people and taking positive feedbacks really sweeten up. I feel that I do something good for people. However it has pearls and pitfalls. Begin with, you become an open target as a trans woman. As if bullying, we have to fight against in real life, were not enough we also have to struggle on virtual bullying.

I sometimes warn the queers, who are about to create an account with their real names at social media, saying “I did it, don’t do it!”. There is no limit and end of hatred at social media, people don’t want to change, they prefer to pour their ideas on to us.

Do you prepare different contents for each channel?

When I prepare something for TikTok, I am able to share the same content at the other platforms. There is an intersectionality between them.

What do you recommend to those who want to carry out social media activism?

They may try to be everywhere as far as possible. Each platform feeds the other. Each has specific fans and followers. They follow the channels considering as a concept. I recommend them to concentrate an issue on which they would not get bored of talking about.

Since the algorithms change frequently and they are unpredictable, it would not be right to say “they may produce on this or that issue”. Each platform has a specific algorithm, they may pay attention to it.

“Keep fighting both is streets and on social media!”

Why did you leave Twitch?

Following the claims about money laundering related to Twitch, they never tried to communicate their streamers and they did it repeatedly whenever something crucial occurred. Therewith #cleanTwitch campaign was arranged and a great deal of streamers stopped broadcasting. I also left Twitch at this period for this reason.

This question is a must. Activism in the streets and at social media, is one of them more important than the other?

I had stood aloof from social media activism for a long time. I was thinking that “Some problems may not be solved by tweeting”, however things have changed.

Primarily, the platforms where non-governmental organizations can make themselves heard, has diminished, streets were closed. Can you imagine the importance of social media in such a case?

Our following experiences proved the substantiality of social media activism over and over in time. We reach the news, which we are not able to see in the mainstream media, thanks to social media. The struggle for the rights of striking workers, problems of queers…

Solidarity and gathering round have not finished in street activism. I cannot say that one is more important than the other, each of them address different needs. Surely, meeting in the Twitter rooms cannot replace meeting in the streets for queers who can overcome their loneliness by entering into the spirit of Pride with their peers.

However smart phones are inseparable parts of our lives from now on, even the drug prescriptions are sent as a message, we can deal with our administrative affairs via smart phones. Something that takes such a big place in life, would become a part of struggle inevitably.

I mean keep visibility and fighting both in the streets and at social media!

You may reach Arya Zencefil’s social media contents below: