Pride March on each and every street in Taksim: “We are here, get used to it - we are not going away!”

The Pride March continued in every street of Taksim despite the police attack. 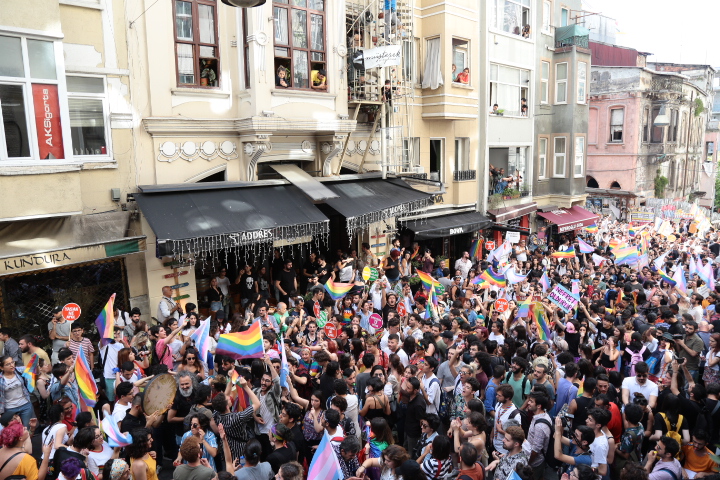 Hundreds met on Mis Street in Taksim for the Istanbul LGBTI+ Pride March to chant: “We are here, get used to it - we are not going away!” Following the press statement, the police attacked the crowd with gas bombs and plastic bullets. The Pride March continued in every street of Taksim despite the police attack.

The police deployed riot forces from early hours on İstiklal Street and its by-streets to prevent the march that was planned start at 17:00. The police performed ID checks on people who were “assumed to be LGBTI+” throughout the day. 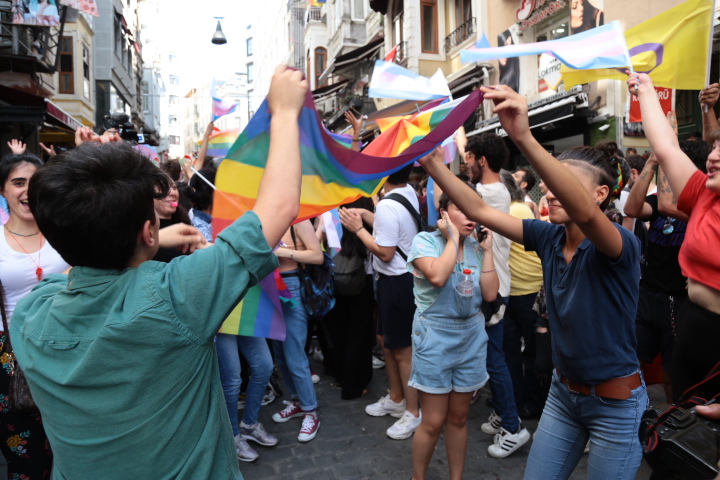 As a result of the negotiation with the police, the Istanbul LGBTI+ Pride Week Committee announced the press statement to be held on Mis Street. Hundreds of people gathered on Mis Street.

Hundreds carrying rainbow, trans, and intersex flags on Mis Street chanted: “Don’t be silent, shout, gays exist!”, “To whom belongs the public morality?”, and “We are you, my love?” 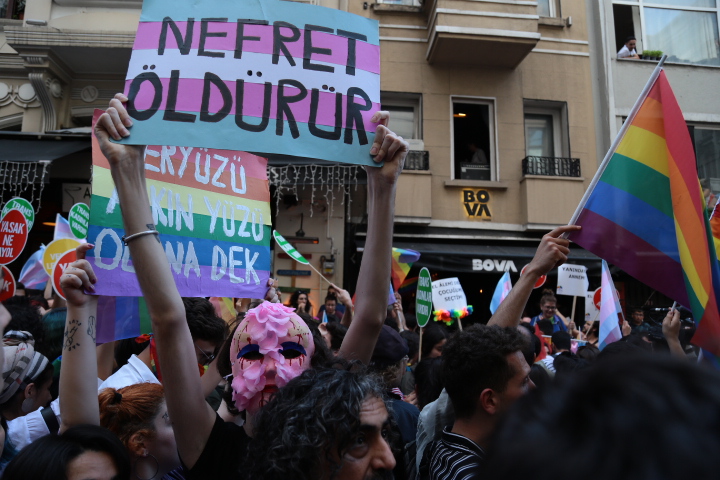 The press statement was read at 17:00 on Mis Street. The Pride Week Committee said in their statement: “We neither abandon our lives and solidarity, nor collective struggle! We are here! Get used to it - we are not going away!” 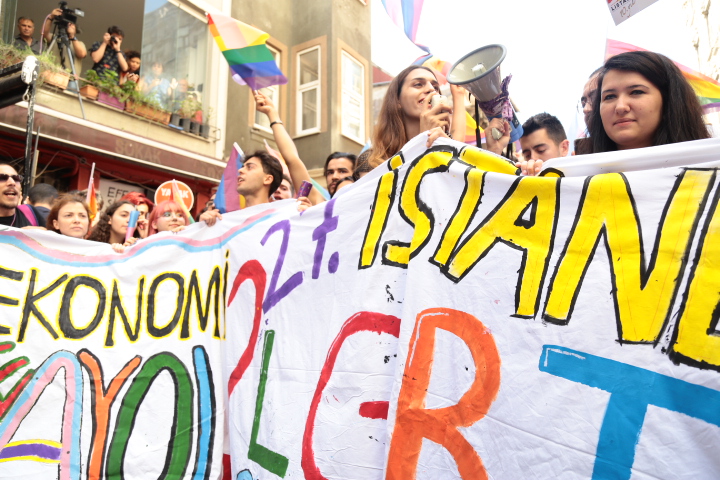 During the press statement, rainbow flags were unfurled from the building surrounding Mis Street. Amongst those buildings was the Beyoğlu Office of the Socialist Refoundation Party (SYKP).

Following the press statement, a track list prepared by the Pride Week Committee was played on the street.

After the press statement, the Pride Week Committee called on: “We are now leaving Mis Street and dispersing onto each and every street in Taksim. We are carrying on dancing and having fun on the streets!” 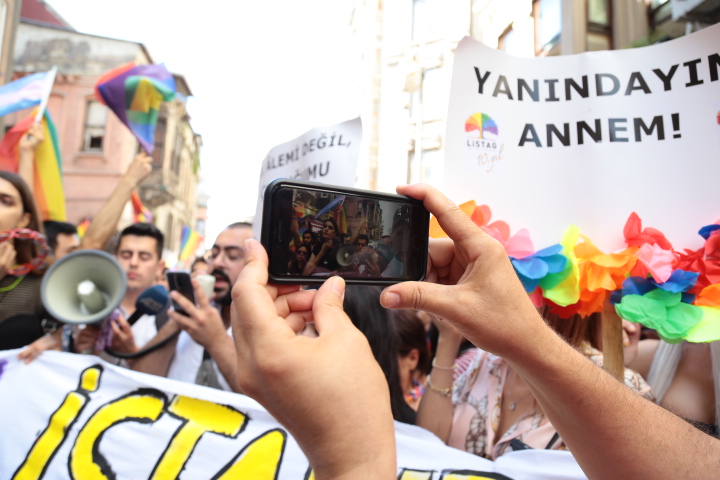 During the police attack,at least five people were taken into custody. 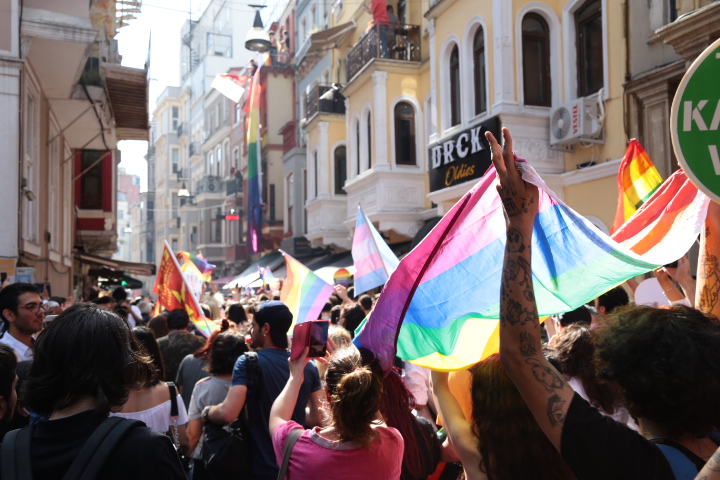 As the crowd were dispersing, the police attacked

The police attacked the dispersing crowd on Mis Street and its by-street with gas bombs and plastic bullets. The police also attacked with gas bombs the bars and cafes in which the protesters took refuge to escape from police brutality. 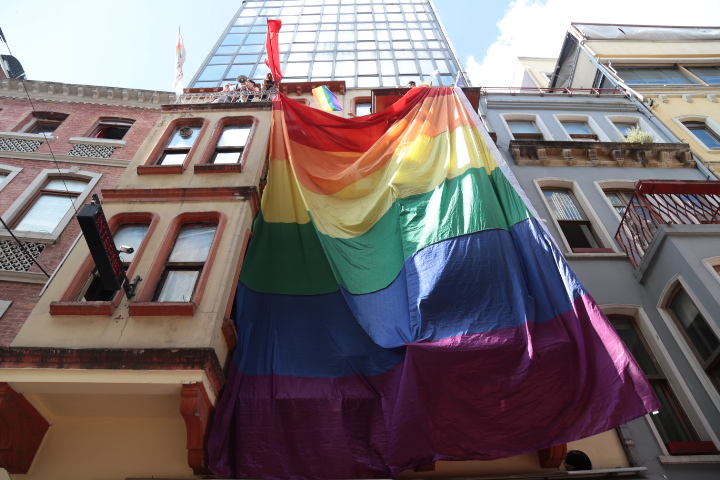 Meanwhile in Tatavla, anti-discrimination demonstrators marched along Kurtuluş Street. The crowd carrying rainbow flags chanted many slogans as they marched. 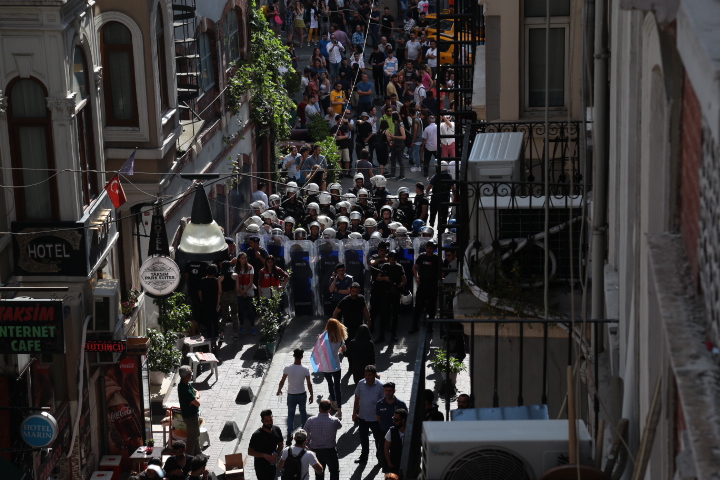 March from Talimhane to Taksim Square

Another group marched from Talimhane to Taksim Square with their banners and rainbow flags. 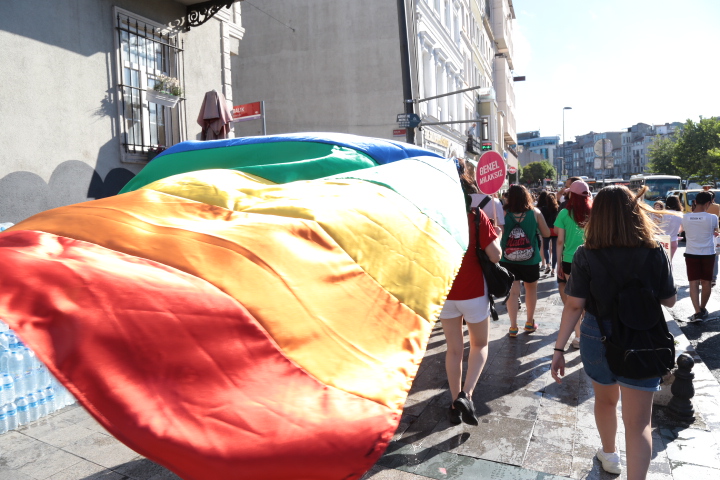 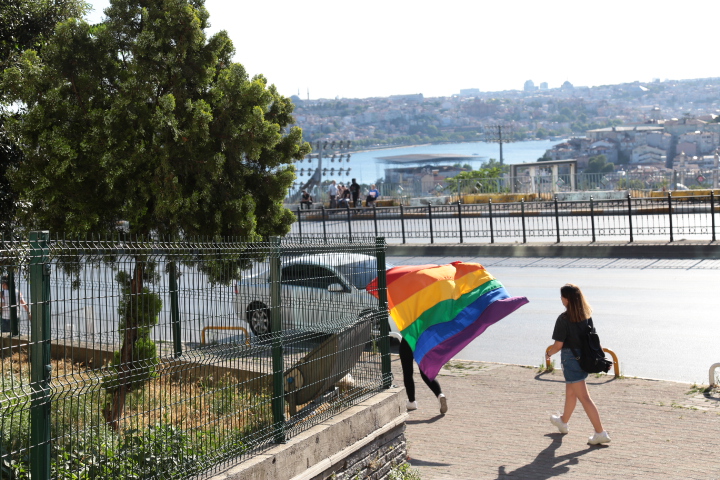 Press statement: “We are here, get used to it - we are not going away!”

Full text of the press statement is as follows:

17th Istanbul LGBTI+ Pride March, which we organise today, is banned by the Istanbul Governorate for the fifth time! Istanbul Governorate, which blocks Istiklal Street to all social opposition groups for security reasons, has unlawfully rejected our application for Bakırkoy - a legally announced public demonstration place - with the claim that we are a socially “hesitant” group. This ban shows that not only Taksim but Istanbul as a whole is prohibited for LGBTI+ people. The hostility towards LGBTI+ community has even become a state policy with the other bans in Antalya, Mersin, METU, and Izmir. 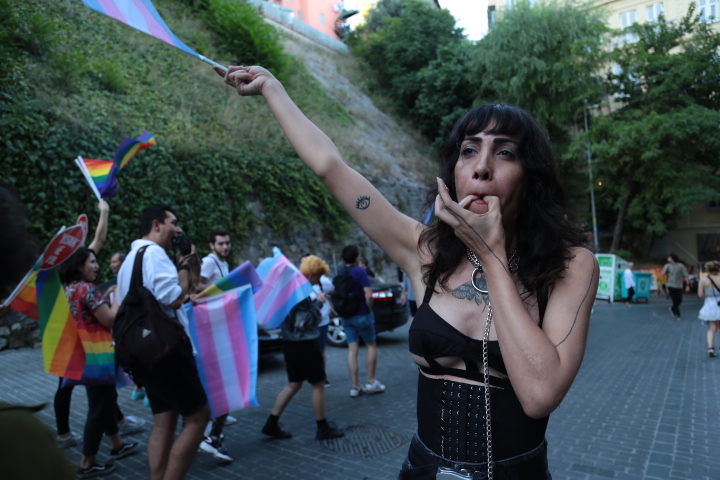 It is one more time demonstrated that those who ban our Pride March with copy-and-paste reasons such as public peace and security, terror, public morality, and public health can not govern the state. Previously organised in a peaceful manner, the Pride March does not threaten the public peace - it is the law enforcement who has attacked the public in Pride Marches in the last five years. 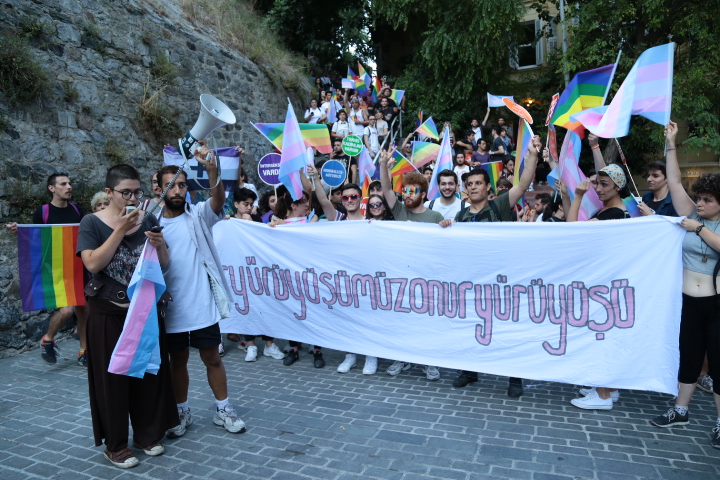 It is ironic that those who are abusing their power, stealing from the public, and presenting their own obsession of power as a perpetuity problem of the state are striving to ban us on the ground of so-called public morality. Those state officials who do not hesitate to fuel the hate against LGBTI+ people, and those who targeted the LGBTI+ community three times in a week for a couple of votes they wished to receive should not forget the fact that LGBTI+s are the society itself. Those who point at us as a target are a handful of power addicts who will sink into oblivion. 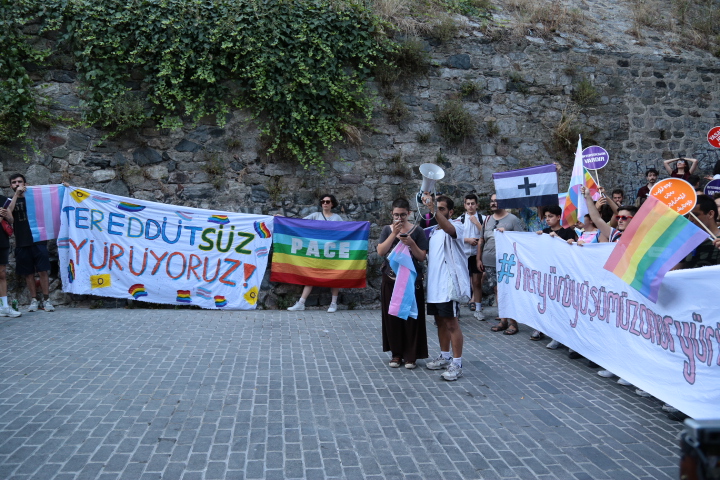 We persistently repeat for those who ignore the demands of LGBTI+ people, for those who attempt to show us as a “disoriented” and “hesitant” group: We are determined in our struggle, and we know what we want very well! Sexual orientation and gender identity must be recognised in the Constitution! Homicides targeting the LGBTI+ community must not go unpunished, and the perpetrators must not be granted abatement for good conduct. The rights of LGBTI+ people, who are blocked to access fundamental human rights such as education, health, and housing, must be legally secured. Our demands neither disturbs the public peace nor threatens the public security. Our demands are essential in a constitutional state in order for us to access equal citizenship rights. Those who are banning our march today must know that the public peace will only be provided if all the oppressed social groups, including LGBTI+ people, seises their rights and are assured their lives. Social peace is not possible in an unequal society! 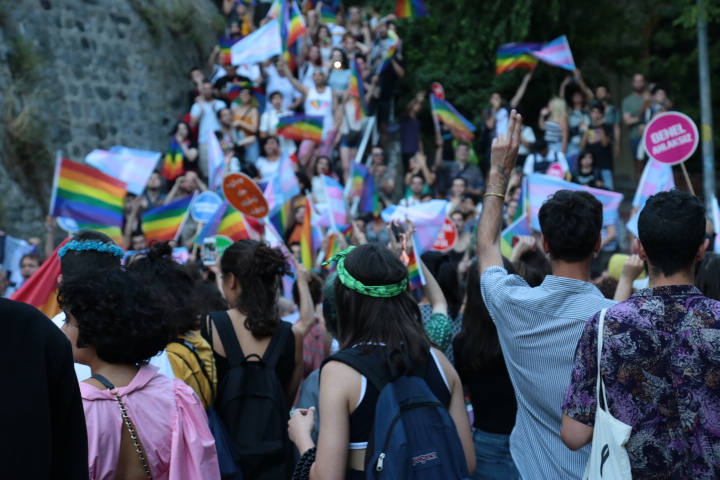 It is the 50th year of our organised struggle for a proud live since the spark that was ignited at Stonewall. In the 50th year of Stonewall, and in the 27th year of Istanbul Pride Week, we once again acknowledge by taking spirit from the struggle we fight for our bodies, desires, rights, and existence all over the world, from Orlando to New Delhi, from Palestine to Amsterdam: We neither abandon our lives and solidarity, nor collective struggle! We are here! Get used to it - we are not going away!