Psychiatrist Dr. Koray Başar: Families should support each other for their LGBT children!

For the Wednesday Seminar organized by Kaos GL, psychiatrist Koray Başar made a presentation titled as ’’Gender Identity and Sexual Orientation during the Development Process and Communication with Families’’ 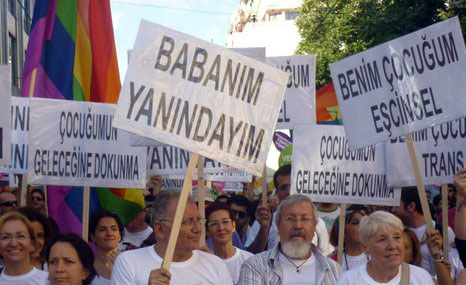 Psychiatrist Dr. Koray Başar: Families should support each other for their LGBT children!
For the Wednesday Seminar organized by Kaos GL, psychiatrist Koray Başar made a presentation titled as ’’Gender Identity and Sexual Orientation during the Development  Process and Communication with Families’’
Koray Başar, who is from Mental Health and Diseases Department of Medical Faculty in Hacettepe University as well as from the Initiative for Mental Health against Homophobia, was at Kaos Culture Center.
’’What is the sexual orientation of men who want to be with women having penis?’’
Başar first talked about the concepts of biological sex, sexual identity, gender and sexual orientation. He argued that the expressions like ’’real men’’ or ’’ideal women’’ changed according to the individual, time and space. He indicated that to be regarded as feminine and masculine was totally different from one’s sexual orientation. He also stated that to think that a medical operation is a prerequisite for a trans individual is a totally wrong standpoint. He said, ’’Trans individuals are the ones who construct a sexual identity beyond the accustomed norms and conceptions’’
’’Upbringing conditions have an impact on gender, but sexual orientation and the construction of sexual identity are not known exactly. The question we cannot answer is not how to be a homosexual but how to construct a sexual identity’’
’’We are all transphobic, we are all transphobic!’’
Başar declared that everyone can have actually homophobic and transphobic stereotypical attitudes as a consequence of being raised within a heterosexist society. He mentioned the pressure over children labeled as ’’problematic’’ or ’’strange’’ because they cannot perform the expected sexual roles and he also argued that one starts to construct one’s own identity after the emergence of secondary gender characteristics in the period of adolescence. He said, ’’A psychiatrist plays a key role in helping the ones who encounter problems related to the expression of their sexual identity in society’’
’’Coming out is not a linear process, but rather multi-faceted, interwined, fluid and suspendable’
’’Individuals may undergo some identity crisis and choose to reject or repress their sexual identity, or at worst, they may oppose homosexuals in order to persuade people that they are not homosexual themselves’’ Başar told that there can be a spectrum of coming out practices such as the acceptance of identity, anti-homophobic rebellion or not to come out.
Başar told that the solidarity among the families is much more effective than a simple notification from a psychologist and drew attention to the importance of the meetings of family groups.
’’Families have got together for three years’’
The journey which started in 2008 with the gathering of parents having LGBT children is continuing with Family Group of LGBTs in İstanbul (LİSTAG).
There is also a family group constituted in Ankara called as Rainbow Family Group (GAG).
LİSTAG gathers in Sexual Education, Treatment and Research Foundation (CETAD) in İstanbul, while GAG comes together in the center of the Psychiatric Association of Turkey in Ankara.
’’Wednesday Seminars’’
These seminars which are planned to be transformed into Kaos Academy at the end are to learn together and improve the mutual struggle. That’s why, your participation and contribution are quite important.
Wednesday Seminars, organized at 18.30 in Kaos Culture Center every week, are open to the participation of everyone.
Kaos Culture Center
GMK Bulvarı, 29/12, Demirtepe/Kızılay-Ankara