Public abuse of trans people by police in Mersin!

In the southern city of Mersin, police officers attacked trans women in public, shouting ‘get out of here’ and assaulting them with batons.

In the southern city of Mersin, police officers attacked trans women in public, shouting “get out of here” and assaulting them with batons.
The violent treatment of trans women by the police has gone unstopped. Citing a misdemeanor law, the police attacked and publicly abused 7 trans women.
Police used tear gas on the trans women while violently attacking them. Among them were activists from the solidarity group, “7 Renk” (“7 Colors”). A 7 Renk activist, Ece Yigit, recounted the incidents to kaosGL.org.
Beating for disturbing the peace!
“We were hanging out last night [July 21st] on Ismet Inonu Boulevard with the other girls. There were seven of us and we were only chatting. There was also a man next to us sipping beer. Then the police came out of nowhere and said: ‘Get the hell out of here. You are disturbing people in the vicinity.’ Honestly, we did not understand what was going on. We were not making any noise. The man next to us reacted to the police, ‘what is the harm of these people to you? They are just sitting here.’ Police attacked him first with batons. Then, they started pepper spraying us. After we protested, they assaulted us with batons.” 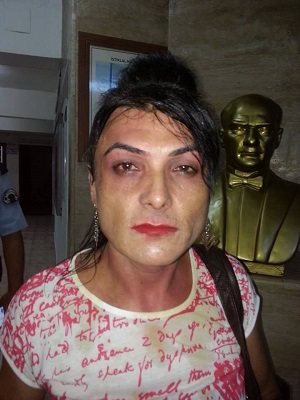 Police denies the incidents!
The trans women were later taken to the police station. No legal proceedings took place at the station. The police also declined the trans women’s request to file a report. According to the members of the LGBTI solidarity organizations, Mersin 7 Renk and Pembe Hayat (“Pink Life”), police denied the incidents, claiming: “There is no report of such an incident. How do you come up with this stuff?”
After no legal proceedings took place, the trans women left the station. Now they are demanding that the abuse be investigated through footage to be obtained from the security cameras.
Perpetrators of hate murders are unpunished!
A trans woman named Cansu was attacked in Mersin, on May 25th in an attack alluding to the Miraj [1]. In December, a trans sex worker called Deniz was attacked with sticks and knives in Pozcu. Four transphobic hate murders have been committed in Mersin since 2006. However, these murders are not recorded as hate crimes and the perpetrators are not handed down the appropriate sentence.
–
[1] Lailat al Miraj – A religious day commemorating Prophet Muhammad’s ascent to heaven –trans.
Translation: LGBTI News Turkey