Kaos GL’s objection to the prosecutorial decision, which deemed insults to homosexuals as freedom of expression, was accepted. This is followed by a case against Yeni Akit, a conservative Turkish daily newspaper. 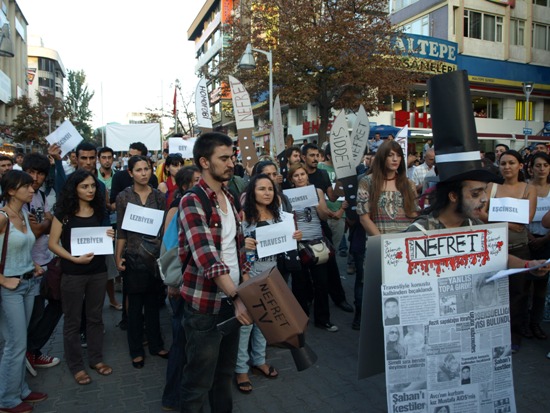 Kaos GL’s (Kaos Gay and Lesbian Cultural Research and Solidarity Association) 10.03.2013 objection to the prosecutorial decision, which deemed insults to homosexuals as freedom of expression, was accepted. This is followed by a case against Yeni Akit, a fundamentalist Turkish daily newspaper.
Bakırköy Public Prosecutor’s Department declared a newspaper article that defined homosexuality as “perverse” within “freedom of expression” under Article 10 of the European Convention on Human Rights and gave a non-prosecution decision. However, the court accepted Kaos GL’s objection to this decision and Bakırköy Public Prosecutor’s Department lifted the non-prosecution decision and filed a lawsuit against Yeni Akit.  Now the court will make a decision on whether homosexuality, which has so far divided the judiciary, is perverse or a sexual orientation.
On October 23, 2012 Yeni Akit published an article which states: “The homosexuals who increase their perverse demands everyday under the guise of “democratic rights” have now entered schools. Kaos GL Association printed a brochure and started to distribute it in schools. The brochure presents perverse tendencies as “normal” and asks for “tolerance” towards students who have these tendencies. The aim is to present perverts as “normal”.” Thereon, Kaos GL Association made an official complaint about the the author Furkan Altınok.
Bakırköy Public Prosecutor’s Department stated that the article was within the scope of freedom of the press and decided for non-prosecution. The court, which accepted Kaos GL’s objection to the non-prosecution decision of the prosecution, decided that a lawsuit must be filed against the Yeni Akit article.
The court evaluated Kaos GL’s objection and decided by 2 votes against 1 that the description of homosexuals as perverse in the October 23, 2012 Yeni Akit article cannot be deemed freedom of expression.

“There is enough doubt to file a public case”
The decision made by 2 votes states “It is understood that the article sexually discriminated against homosexuals by assessing this sexual preference and the demands that go with it as perverse and thereby insulted them. We see enough doubt to file a public case.” One member remained opposed by claiming freedom of expression like the prosecution.
After the court lifted the non-prosecution decision, the prosecution had to file the lawsuit. The fact that the prosecution did not make an evaluation in the indictment, other than stating that the lawsuit was filed because of the court’s ruling, has attracted attention.
Now the region court will decide if these words constitute a crime or not. According to the decision, a lawsuit will be filed against the reporters for the crime of “insulting a certain part of the public” as arranged by Article 216 of the Turkish Penal Code.
Translation: LGBTI News Turkey