Trans activist and sex worker Sinem Kuzucan had to resign from her teaching job because of pressure due to her gender identity. 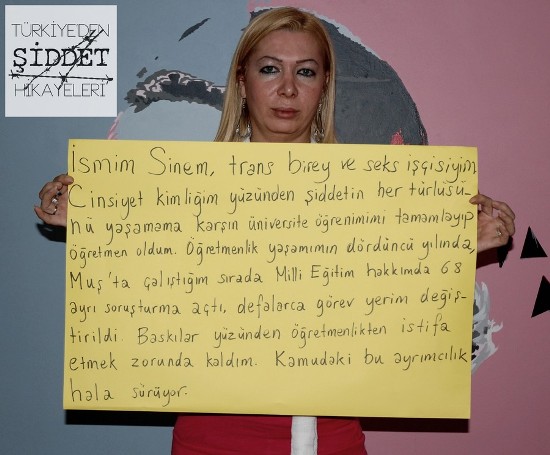 “Violence Stories from Turkey” is a project by Intercultural Research Association that aims to archive and document the phenomenon of violence in Turkey; to prevent events of violence and their victims from “becoming ordinary” and “turning into statistics”; to investigate the conditions of violence in order to make future projections; and to bring together NGOs, civil society, and advocates for the defense of victims’ rights. The project publishes photographs and interviews with victims or witnesses in a simple and flexible format that allows the interviewees to express themselves.

Trans activist and sex worker Sinem Kuzucan had to resign from her teaching job because of pressure due to her gender identity. Kuzucan talked to “Violence Stories from Turkey” about the existence of trans people in the public, the Misdemeanor Law and the Turkish National Police’s performance system that limits the living space of sex workers.
How did you first encounter the concept of violence? Were you ever subjected to violence before realizing your gender identity?
The most severe violence in the life of a trans person is evil stares. I mean the stares like “What is it, who is it?” When a child realizes that something is different about himself or herself, he or she does not really understand “identity”. I had the same experience. You do not really know who you will resemble, who you will become- your mother or father. Even though you have not figured it out, your family, kids on the street, friends from school see your difference. “Sissy Ali, Sissy Murat” are the nicknames. In fact, you figure what is going on when you hear these names. This is where the violence starts. This broadening discrimination excludes you from your family, from education, from employment. You cannot find any place in life.
What kind of trauma does this pressure and social discrimination create?
The social violence a trans person is exposed to in her early life affects her whole life. Your access to education is prevented because of discrimination from schoolmates. You are deprived of family support, as well. They say things like “what will others say, why do you behave like this, do not trot like a girl” and when this turns into physical violence, you have to leave home. You don’t have a school after leaving home. Without the two, you are hardly employable. The violence and discrimination you are subjected to at this point in your life changes your whole life. I lived through this; if I had suppressed my identity, I would have a so-called “normal” life.
We are taught by society that there is either man or woman. In my teaching job, even though I am a trans person, I was forced to tell the same story about the nuclear family to my students.  This is how it was taught to us as well. Egalitarian legal regulations are important for transforming these discriminative attitudes. If this society is in its current situation due to monotypic laws and regulations, then it can be transformed through new regulations. We should start with the law. When it comes to trans murders, they reduced penalties on the pretext of provocation for years. In the past, trans murderers would be sentenced to two years or they would not be punished at all. Now at least they are sentenced to fifteen years. As laws become more egalitarian, society will have to adapt with time. Temporal periods are never easy.
How were your relations with your family and relatives until you discovered your gender identity?
My family’s roots are from Eastern Turkey but I grew up in Ankara. My childhood was full of insults. With the fear that someone from the neighborhood would talk behind my back, I did not make any friends in the neighborhood. They also made fun of me in school but I shut my ears until high school. I got on well with my family in the beginning; I helped my mother with housework, cooking and cleaning. As you see, I was the good child of the family. All the other boys were playing football, being naughty and breaking windows. I was cleaning the windows, staying at home quietly.
Until when did this good child thing go on?
It went on until I learned my gender identity and met people like me. After I started to express my identity openly, I was no longer a good child. They said “apparently he is not a well-behaved boy but a transvestite”. Still I say to mom “You were content with me doing the housework and cleaning the windows those days, were you not?”, and she says “we thought you were a good child.” Once your trans identity comes out, you draw all bad reactions upon yourself. It was same with me as well. My family gave a verdict of death on me and were discussing where to bury me. So I was kidnapped by someone from my family who understood me. I had already been subjected to violence; I was covered in bruises all over. I had to abandon my home in the last grade of high school in that state. After that, I did not see my family for years.
How did you go on with your education?
There was quite a short time for me to finish high school when I left home. For six months, I lived in the houses of trans people in Ankara, in various places and in train wagons. I had a math teacher who knew about my gender identity and the things I had been through. He did his best for me to finish high school. I finished high school with his help and I went to Istanbul. I worked as a sex worker in Istanbul for two years. You do not have any other choice as a runaway child. You don’t have any other example either; all trans people do this. This was 20 years ago, so there were no rights or any recognized organizations. Your existence or non-existence is barely noticed. It is a dead-end.
Without any association or organization, how did sex workers communicate with each other?
All the trans people already knew each other. They always had to change places because of oppression and violence. Trans people coming from Ankara to Istanbul know and support each other. You are always in communication because you work to keep your friends’ lives safe. There is no other alternative. 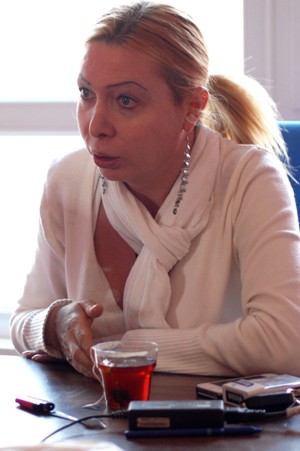 In Istanbul’s police stations, bonuses are declared for the arrest of criminals. They get points, premiums and promotions according to their performance. This point scoring system includes crimes like hijacking, gangs, terrorism, etc. There is also a statement that says, “certain person, known person”. Or as they call it, “transvestites”. According to the international agreements Turkey has signed, being a transsexual or a sex worker is not a crime anyway. If you consider them crimes and give points to the police, you are automatically violating human rights. The media does it as well; they publish news of prostitution raids. Prostitution is not a crime; why would they bust something that is not a crime, why would the media publish it?
Publishing these stories is another violation. The real criminal here is the raiding police. I can engage in prostitution; it is not a crime! How can you fine me? Under the Misdemeanor Law, they fine people who engage in prostitution. In order to score points, police officers fine trans people whenever they see them. They fine the same person hundreds of times in a month. If s/he does sex work for two hours, s/he has to work for four more hours to pay these fines. That means the state itself encourages prostitution, it means “work more and pay the state”. They say we do not pay taxes. And we say “document sex work, in this way you can save sex workers from the underground and from human trafficking, and if taxed income is blessed, we can also be blessed.” Sometime I go to the streets after they fine me and the police officers ask, “we just fined you but still have not come to your sense”. At this point, I show them the fine and say “I paid my tax, taxed income is blessed. I can work”.
In Antalya only, the amount of fines collected from trans people comes up to 246,000 TL (approx. 120,000 USD). It becomes a rent economy for them and they exploit trans people. This amount is what they took from a handful of trans people in Antalya in 6 months. Think about the nightmare in Turkey as a whole. One of our friends’ due debt is 40,000 TL (approx. 19,500 USD), she was fined just for going outside. They spot you walking around by yourself and they fine you. How can you engage in prostitution by yourself? It is not a crime; even if it were, you would think it above crime if you do it by yourself.
The state excludes trans people from the work sector and hesitates to make regulations on sex laboring. What is the solution?
Prostitution is not a crime in Turkey. But in practice we see the Misdemeanor Law and prostitution busts. 3 or 4 years ago, Sinan Aygün, now Republican People’s Party Parliamentarian, was the director of the Ankara Chamber of Commerce (ATO). He made fun of trans people as a director of ATO on TV and said “Are we supposed to give them jobs instead of our moral, college graduate young girls?” How can trans people be employed this way? If you continue like this, at least leave them alone in sex work. The system itself pushes trans people to the back streets, to nightlife, and to unregistered work. Why do they want to disrupt this? They tell us: “This is where you belong, live there silently. Get murdered there, get injured there but never protest. Keep your silence, keep yourself out of sight, disappear, and get lost”. When we protest and say “This cannot go on like this”, we face the police, Misdemeanor Law, and torture. The state tells us to “shut our mouths”. They either have to regulate sex work or they have to ensure the employment of trans people in other professions. Doing nothing means leaving us to die.
Translation: LGBTI News Turkey