Reflections on the European Social Charter 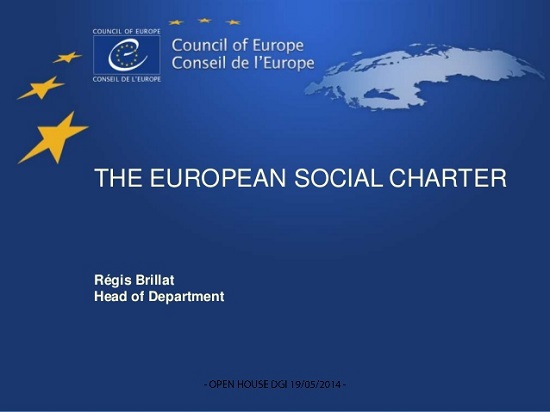 Human rights defender Hakan Ataman wrote for the book "Discrimination at Workplace and Fight Against Discrimination" compiled by Kaos GL: Reflections on the European Social Charter in relation to the violation of economic and social rights of LGBT people

The fact that lesbian, gay, bisexual, trans and intersex (LGBTI) people face discrimination on the basis of their sexual orientation and gender identity is not a new phenomenon. However, the protection offered by regional and international human rights mechanisms against these violations is quite new and, as Douglas Sanders has stated, this has started in Europe[1]. Initially with its conservative or, if we were to put it more nicely, shy comments, Europe’s protection mechanisms have recently expanded its comments and coverage so much to the extend economic and social rights have also been included[2]. Even though legal protection is not sufficient on its own[3], it is still possible to say these developments are pleasing for constituting a legal basis at the very least.

European Social Charter is a legal document that is constantly expanding its contents. As the European Committee on Social Rights has stated clearly in various decisions, it is a living document[4]. It is the largest and binding contract protecting all kinds of social rights in countries that are in the Council of Europe but not yet European Union (EU) members. In EU member countries, the Social Charter offers even a more advanced level of protection than the EU does. For example, the version of the Social Charter in effect is the only document in Europe with the most comprehensive legislation on children’s employment. Similarly, the Social Charter is the only document today that offers remedy to social exclusion and poverty. Additionally, in the case of a violation of the rights in the revised version of the Social Charter, collective complaints can be made to the Committee according to the additional protocol accepted in 1995 and put in effect in 1998. As a result, Committee reviews the applications and rules, which expands the content and implementation of the contract.

The first example I will give is from 2008 in Poland: The Committee ruling on Article 1.2 which regulates labour life in the revised version of the contract[5]. In its state report to the Committee, Poland had stated that the Polish Constitution has a general article which bans discrimination, including on the basis of “sexual orientation”. However, the Polish government failed to show in what ways the Constitutional protection was reflected on other legislations, especially the labour law. Also, the state did not give any information about the implementation. In the meantime, the alternative report submitted to the Committee by two NGOs working on the rights of LGBTI people has shown that at least 10% of the community experience discrimination at workplace. Out of this 10%, 27.6% stated that their applications were rejected, 23% was fired and 14% was denied promotion on the basis of their identities. The Committee found out from another report that the Polish state had no strategy to eliminate discrimination at work place and that the Minister of Education refused to use Council of Europe’s anti-discrimination publications, which included content about homosexuality, because the publications did not over lap with Poland’s moral values. In the light of this information, the Committee did not find the reports of the Polish state satisfactory and requested the state to come up with more satisfying answers to the above claims. The Committee also stated that Poland’s situation does not comply with Article 1.2 of the contract due to other reasons.

The second case I want to point at is this: The collective compaint by INTERRIGHTS, an NGO working on human rights protection on international level, against the country of Croatia[6]. The complaint was filed based o the argument that Croatia has violated the Social Charter’s Article 11 on the right to health services, Article 16 on families’ right to social, legal and economic protection, and Article 17 on children and youth’s right to social, legal and economic protection. After reviewing the application, the Committee concluded that Croatia allowed discrimination and stigmatization against LGBTI people in its school textbooks. According to these textbooks, LGBTI identities are caused by failed family relations, linked to AIDS and are defined as sex addicts and drug users. Therefore, Croatia was charged with violating not only the article that bans discrimination but also Article 11.2 which guarantees access to education and services to advance health standards. The Committee did not think there was need to further inspection on Article 16 and 17[7]. The decision was approved by the Committee of Ministers of the Council of Europe[8].

The third important ruling was a decision taken by the Committee on the report Malta has presented[9]. In the final report released in January 2010, the Committee looked at Article 11 from various angles: The right to health, including for trans individuals to have the right to access health services. In Malta’s state report, it is stated that no document is required from certain groups, such as migrants, when they are in need of health services. However, in another report[10], it is stated that Malta does not offer hormonal therapy or gender-assignment surgery. Even further, some health professionals do not have any knowledge on the particular health problems trans people face. Under these circumstances, the quality of health services fall and trans people face discrimination in their access to their regular health services. In reference to the Committee of Ministers of the Council of Europe’s Rec(2001)12 recommendation, the Committee emphasized that countries “are obliged to adapt their health services to the needs and demands of marginalized people.” This is why the Committee requested Malta for its next session to prepare a clear report on the access of marginalized groups to health services and indicated that Malta’s national laws do not comply with the contract. One of the reasons this ruling is very important is because it is the first decision that looks at the needs of trans people this closely. In similar rulings, only sexual orientation has been referred to. This, as expressed many times by the LGBTI movement, leads to gender identity being wrongly defined based on sexual orientation and ultimately an ontological problem. With its Malta decision, the Committee pointed at the special needs of trans people and marked a significant development.

The last example I want to touch upon is the Committee’s decision on a report presented by the Turkish state[11]. The Committee released its decision in January 2013, and right before that, a coalition of ILGA Europe, Turkey (Kaos GL) and Russia (LGBT Network) presented their own alternative reports on the violations of the human rights of LGBTI people[12]. The Committee concluded that the Labor Law (no: 4857, Article 5) and the Constitution (Article 10) do not include age or sexual orientation as grounds that need protection. This is why the Committee asked if the term “other similar grounds” included age or sexual orientation, according to Article 5 which says “No dicrimination is allowed in work relations on the basis of language, race, colour, sex, disability, political views, philosophical beliefs, religion, sect and other similar grounds.” But Turkey failed to answer this question in its last state report. Even further, giving reference to ILGA Europe and Kaos GL’s alternative reports as well as the EC Progress Report which said LGBTI people continue to face discrimination, threats and violence and that Turkey continues to not have a comprehensive anti-discrimination bill, the Committee ruled that Turkey’s situation does not comply with the Social Charter’s Article 1.2 which regulates “labor life”.

As a result, European Committee on Social Rights looked at discrimination on the basis of sexual orientation and gender identity from an economic and social rights perspective, which is a vital start for similar rulings. But one other key issue here is the power of alternative reports prepared by NGOs on the economic and social rights of LGBTI people. Reports from the LGBTI movements have a great impact on the rulings that take place at the Committee. Therefore, this is an important case model not only for Kaos GL but also for other NGOs working on human rights issues for the protection of economic and social rights. The impact of the alternative report submitted in collaboration with ILGA Europe should carry importance also for other NGOs. It is important that more alternative reports reach the Committee following close review of reporting dates and topics covered.

[2] In recent years, we see that United Nations (UN) too is trying to keep up with the protection mechanisms in Europe. It does not yet have a comprehensive legislation; however, it is possible for the UN to develop its own legislation on the subject.

[3] It is important that legal protection comes with a decisive and strong political position. There are many anti-discrimination regulations in the law; however, discrimination exists in our lives either secretly or openly mainly due to a lack of political will.

[6] Collective complaint No. 45/2007 by the International Centre for the Legal Protection of Human Rights (INTERIGHTS) against Croatia.

[7] The decision on the merits for the complaint International Centre for the Legal Protection of Human Rights (INTERIGHTS) v Croatia (no. 45/2007).

[8] Resolution CM/ResChS(2009)7, Collective complaint No. 45/2007 by the International Centre for the Legal Protection of Human Rights (INTERIGHTS) against Croatia.