Sedef, who was subjected to violence for two years, has been denied of temporary alimony request

Sedef, who was exposed to violence, stabbed, threatened and prevented from working by her ex-boyfriend, has been denied of a precautionary alimony. The verdict has been appealed at the Constitutional Court. 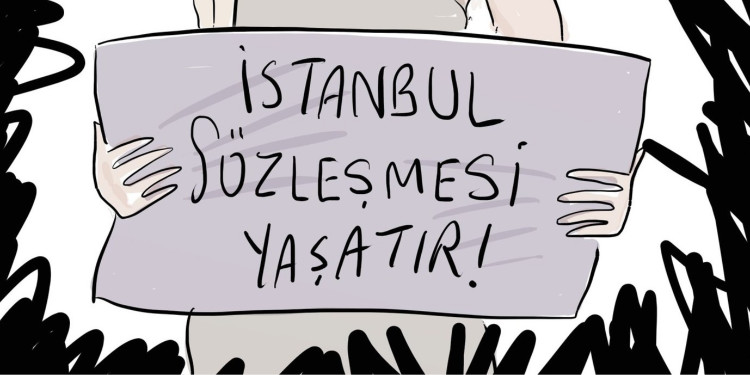 WARNING: This story is related to violence. Although details are not included, the incident is narrated. Content can trigger the memories of those who have previously exposed to or witnessed violence, discrimination, hatred, and had traumatic effects. In such a case, you can contact the mental health professional you think can support you, contact the LGBTI+ organization in your city, or email danisma@kaosgl.org for support.

Sedef is a trans woman living in Aydın/Kuşadası. Her ex-boyfriend Ersin Y. has been inflicting physical, psychological and economic violence on Sedef for more than two years. Ersin Y., who disregarded the protection orders taken by Sedef through the court and stabbed Sedef in front of the courthouse while there was an injunction order, increased his threats to a point that prevented Sedef from working and even going out. Upon this, Sedef applied to the Association for Monitoring Equal Rights, in the legal struggle she had carried out alone until then. With the support of the association, she also requested temporary alimony from the court through her lawyer Lalezar Nergiz. The court rejected this application, which was based on Law No. 6284 on the Protection of Family and Prevention of Violence Against Women. Sedef carried this refusal to the Constitutional Court. Meanwhile, she is waiting for the authorities to act to end the violence…

We talked with Sedef and Att. Lalezar Nergiz about this whole process, the events and the court decisions.

“He did everything he could do to suffocate me”

Sharing her experiences with KaosGL.org, Sedef said, “He did everything he could do to suffocate me, to kill me. He broke injunction verdicts four times. He also served a short term in prison for these acts, but he didn't stop. It's been two years. I'm tired of this man, but we will not let it go, we will keep fighting”.

According to Sedef, her ex-boyfriend Ersin Y. imposed physical and psychological violence during their relationship. Sedef left him, as she could no longer endure. Thereupon, the dose of the violence used by Ersin Y. increased:

“Normally he is forbidden to even approach me. I had a cautionary injunction before. But last year he stabbed me in front of the courthouse because I did not agree to make peace while there was a cautionary injunction in effect. He had broken my nose before and then I applied for a cautionary injunction order. He violated the injunction four times. I informed the prosecutor about the places I have been to, I told them that he came to the places I regularly visit and caused incidents. He is also forbidden to go those places, but he does not let me be. He visits all the bars I've been to. Then he goes out on the street with his friends, harassing my friends. He has been systematically subjecting me to physical, psychological, sexual and economic violence for two years. The wounds of physical violence are fading, but economic and psychological violence are the worst. I get psychological support because puts me into trauma after trauma. He also called my family and said "She is been sleeping with men" for me. When my sister hears this, of course they got into a fight, her blood pressure rises, then my sister was hospitalized. He does anything to inflict pain.

“I have been subjected to violence for two years. He was sentenced for disturbance, insult, injury and threat. He was found guilty of all these charges. I also have one more case that is under the prosecutor's investigation. However, he was not imprisoned except for short-term prison sentences for disobeying the injunctions because the hearings were not finalized. And while he can roam freely outside, I am constantly under his threat. I work in the nightlife and he threatens to kill me if I go out at night, 'dress in low-cuts', 'meet with another man'. So I lost my income too. For example, he threatened me as 'Didn't I stab you in front of the courthouse while there was a protective injunction, shotguns are very cheap online, have the state protected any women that you believe it can protect you? I can kill you on the street with a shotgun if I want to, I will stab you like I did before' This situation is also challenging me financially. I took refuge with my friends, but he called them and threatened them. "

After all this, Sedef contacted the Association for Monitoring Equal Rights and, with their support, she filed a lawsuit with the demand of alimony regarding the economic violence she suffered.

"There is also economic violence, the demand for economic protection should also be considered"

Aydın 3rd Civil Court, acting as a family court, rejected the request on the grounds that “there is no marital relation”. They appealed the decision. The 1st Civil Court of Aydın also rejected the economic protection request on October 21 with the same reason. Thereupon, Sedef, with her lawyer Lalezar Nergiz, appealed to the Constitutional Court.

Att. Lalezar Nergiz commented on the court's rejection decision to KaosGL.org as follows:

“Even if the measure is expressed as alimony, this is actually economic protection. As included in the Istanbul Convention and Law No. 6284, there are types of protection as well as types of violence. Law No. 6284 states that the court must take action according to the nature of the incident. However, Sedef's demands are being rejected persistently.

“While Sedef was living with her ex-boyfriend, she was not allowed to work, they eventually break up and he starts to prevent her from returning to work. Sedef has applied to various employment offices. She could not find a job. There is also serious economic violence, as the only thing she can do is prevented by the perpetrator. The court concluded that the alimony cannot be issued because they are not married. We stated that this was not related, that what was in question was about domestic violence. However, it was rejected with vague statements such as 'the verdicts issued so far are appropriate'.

“Economic protection should have been provided automatically by the court even without a request. There is a woman who has experienced all kinds of violence, from being beaten to being stabbed. And economic violence is also inflicted. There is psychological violence, threats. There are also a lot of criminal files related to this. Sedef has 9 applications for protection requests, and there are 4 violations of protection measures. Protection against the inflicted economic violence must be provided too. "