The 7 Colors Mersin LGBT Association protested the transphobic hate crime committed against trans sex worker Deniz in the southern city of Mersin on Monday with a press statement.

The 7 Colors Mersin LGBT Association protested the transphobic hate crime committed against trans sex worker Deniz in the southern city of Mersin, Turkey on Monday, 23 December 2013, with a press statement.
The demonstration took place in front of the Pozcu Akbank branch where the attack happened and the 7 Colors Mersin LGBT Association was also supported by some political parties and NGOs. After the press release, slogans were shouted against transphobic hate attacks and murders. After that, members of the 7 Colors Mersin LGBT Association held a short sit-in.
"We are everrywhere, get used to it!"
The press statement read by the spokesperson of the 7 Colors, Tuna Şahin, stated:
“Here, where I am standing right now, our transsexual sex worker friend Deniz was attacked with cleavers and sticks on Monday, December 23 around 8.30 PM. Deniz, who was terribly beaten, had deep wounds on her face due to stabbings with cleavers. Right now Deniz is at the hospital under the control of doctors. She has not been able to give a clear statement. And her attackers have disappeared as if this place is a wild stretch of land!
Attacking Deniz’s life monstrously, these inhumane criminals spilled out this transphobic hatred against her: “We don’t want you all here, go away!” Now we call out to these butchers: How do you find the right to behave this way? Who do you think you are that you feel you have the right to chase us away from here? Where does this vanity and brutality come from? No one has the right to not want or not allow a person different from them to live. I am calling out to the creationists: When faith in God and Islam protect all of God’s creatures’ rights to life, how can you end the lives of people with such hatred? Those who define themselves as democrats and keep grimacing once the topic comes to gays, how can you still speak of democracy when you despise one group in society?
When will your bloody despicable hatred end? Where do you find the right to consider yourselves better than us? You should acknowledge that heterosexuality is not the only type of sexual orientation. You do not have any right to damn, patronize and reject us, LGBT people, with your learned heterosexist perceptions.
What happened in Mersin is not the first transphobic hate crime
Since 2006, four transphobic hate crimes took place and none of them have been recorded as hate crimes. Şoray’s murderer only stayed in prison for three years and now is out. Cansu’s murderers were sentenced for seven years; though they are still in prison, no one can tell what they will do once they are released because they did not get the full sentence they deserved. The murderers of our other friend Şiar Avcı killed her by stabbing 87 times.
Even though this hate led to the stabbing of a human 87 times, this crime was also not reflected in the records as a hate crime. In the present case, Deniz barely escaped death. Those butchers bursting with anger, beat up our friend with cleavers and sticks and then threw her in front of a moving car on the street. The method of this attack indicates that this was an attempted murder. This attack intended to kill. Ironically though, this attack happened in Pozcu which is considered to be a place where mostly modern-progressive people live! Under these circumstances, we have come to the conclusion that homophobia and transphobia can be carried out by anyone regardless of how conservative or progressive they are.
Homophobia and transphobia are diseases and it is never clear who gets infected by this disease.
We, the members of the 7 Colors LGBT Association, will not stop following this case.
No one should have any doubt of that we will do everything to catch these perpetrators. Yet we are hesitant about the homophobic and transphobic mechanism that we will encounter, first among the police forces and then during the judicial process, which would result in a failure to address this crime. In fact, police forces and judicial system have tried to vindicate perpetrators almost in all of homophobic and transphobic hate crimes so far. Because perpetrators receive reduced sentences, hate crimes cannot be stopped. On the other hand, the policemen, who were working in the emergency room of the Toros State Hospital on the day of the attack, treated our friends who took Deniz to the hospital as criminals and set up a security cordon. This incident is also concrete evidence that supports our hesitation.
The biggest responsibility to resolve this adversity is the government’s
The ruling party that refuses to recognize sexual orientation and gender identity in the Constitution legitimizes these crimes. Perpetrators know that they will not be punished or think that they will be released after a short sentence.
All of these facts encourage perpetrators.
We will be the followers of this case and will not give up until the day the perpetrators get sentenced.
Shut up transphobia! Shut up homophobia! We are here, we are not going anywhere, we exist, and we will exist! 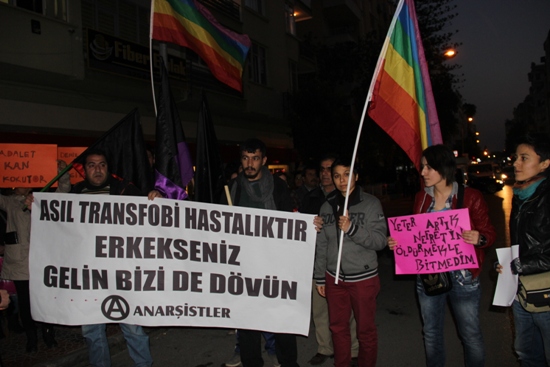