The atrocity of Eryaman-Esat continues at the Courthouse! 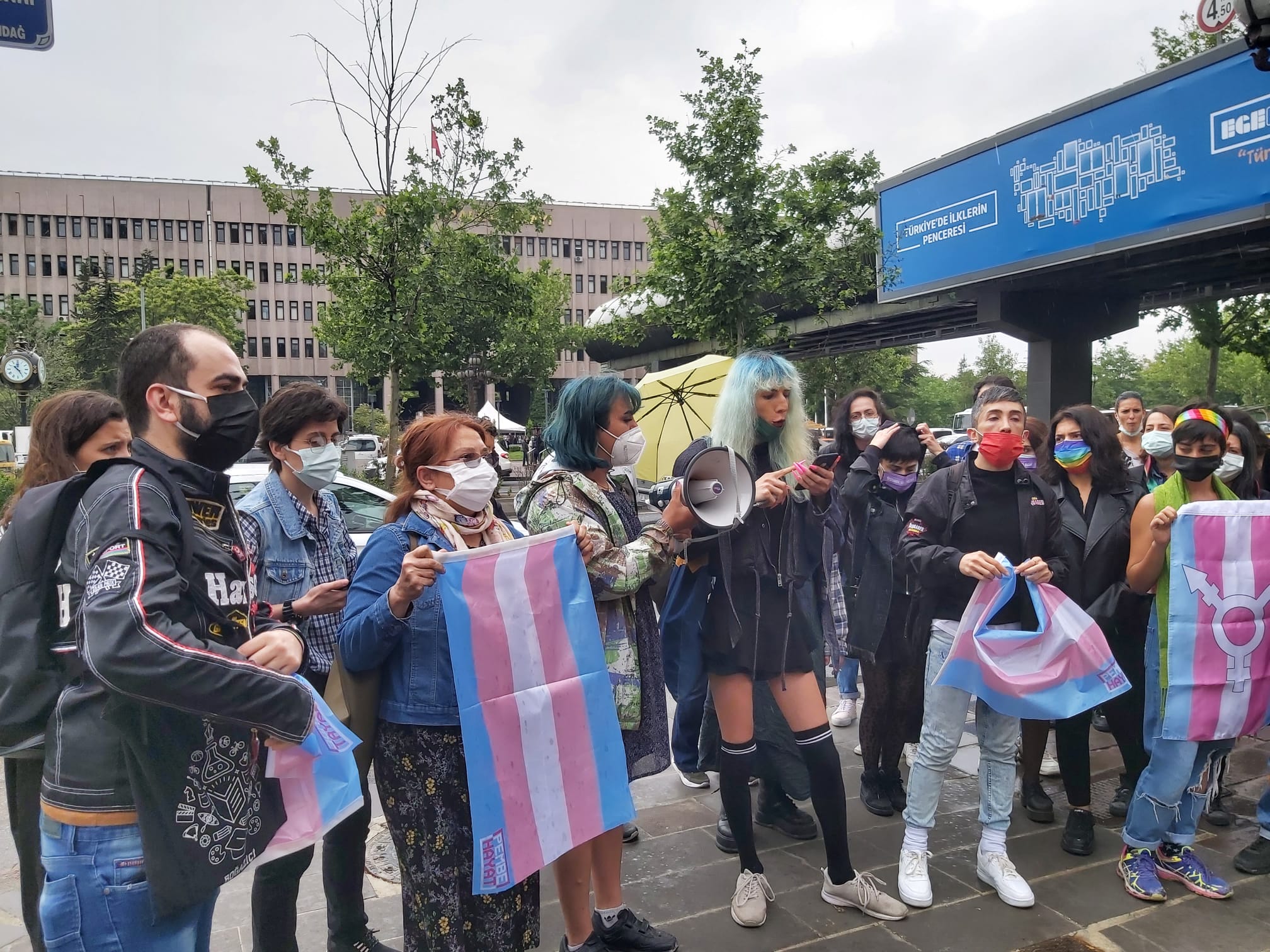 In April 2006, a gang attacked trans women in Eryaman, Ankara. Many trans women were forced to leave their homes in Eryaman. Some of them changed cities, some moved to the Esat District of Ankara. The attacks continued in Esat. The second hearing of the case against four people on the charge of organized crime, which was sent back and forth between the Supreme Court and local courts and was re-started after the reversal verdict of the Supreme Court, has been held at Ankara 30th Heavy Penal Court on June 1st.

LGBTI+ activists, and Peoples' Democracy Party (HDP) Izmir MP Serpil Kemalbay, monitored the case. No spectators were allowed into the courtroom under the pretext of the pandemic measures. Human rights advocates could only monitor the hearing from outside the courtroom.

The case has once again been adjourned to address the shortcomings. The next hearing is scheduled for September 24 at 9:30 a.m. 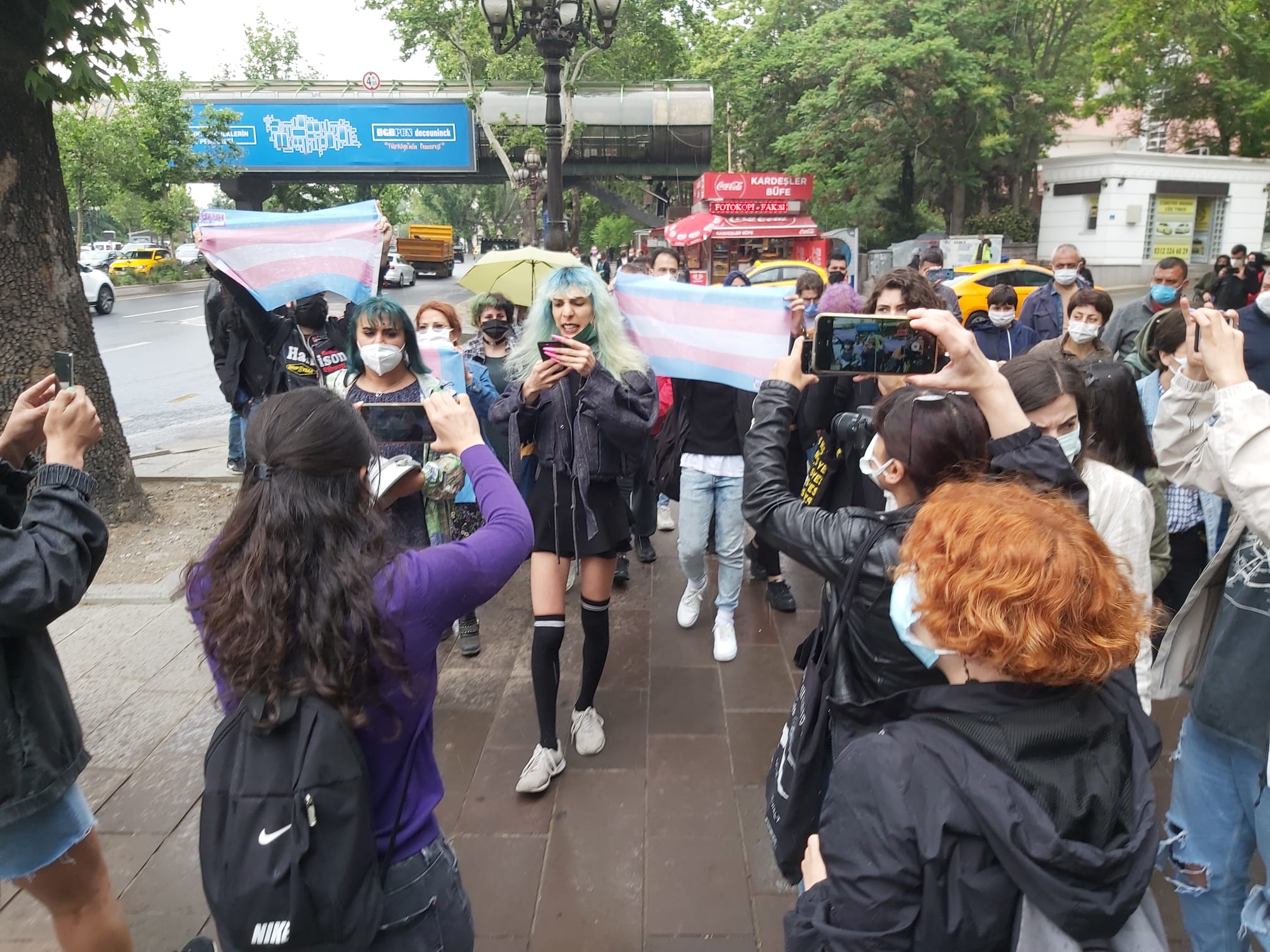 LGBTI+ activists monitoring the hearing wanted to make a press statement outside the courthouse. Undercover police officers intervened to the press release. The activists then went outside the courthouse. Police attacked Efruz Kaya of the Pink Life Association, while she was reading the press release. Activists started to walk and read the press release as they walked. The riot police stopped the group in front of the Language, History, Geography Faculty of Ankara University, attacked an activist carrying a trans flag and prevented the press from getting footage. 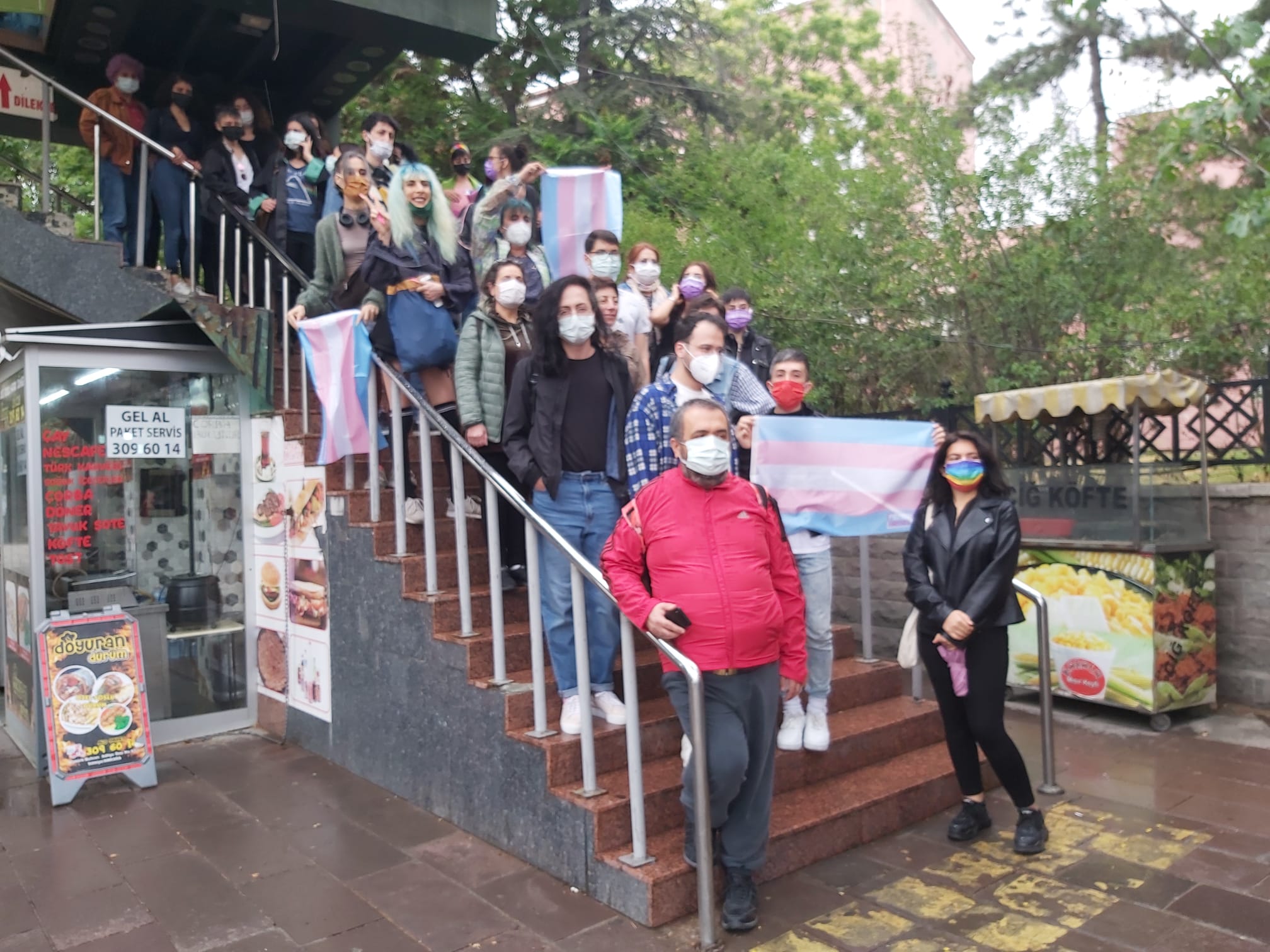 Our editor Yıldız Tar was attacked, their phone was confiscated, preventing them from getting footage

An undercover police officer attacked our editor, Yıldız Tar, despite saying they are a journalist and showing their international press card. The police confiscated Tar's phone. Tar was able to get their phone back after objections from activists. But then police attacked again while taking a video. Our editor Yıldız Tar explained what happened:

"The police were aggressive from the first moment. They did not allow a press release outside the courthouse. LGBTI+ activists crossed to the other side of the road in front the courthouse. Efruz Kaya of Pink Life read a press release and police began pushing activists. The activists then began walking and reading the release as they walked. The activists said, "We're just going to read the statement and disperse. You are prolonging the process", despite all the objections of the lawyers to the police, the attacks of the police continued. Suddenly, a middle-aged, plain-clothed police officer burst into the middle of the activists and tried grab the trans flag. He attacked me while trying to capture that moment. He pushed me with his shoulder and elbows. When I told that I was a journalist and showed him my press pass, he forcefully took my phone. When I objected, they pushed me away and tried to confiscate my phone. I was able to get my phone after objections from activists and lawyers. Then, while trying to take footage from a high place, three plainclothes police officers came up and started shouting, 'Get down, get out of here.' Even though I said I was a journalist again, they forced me to get down." 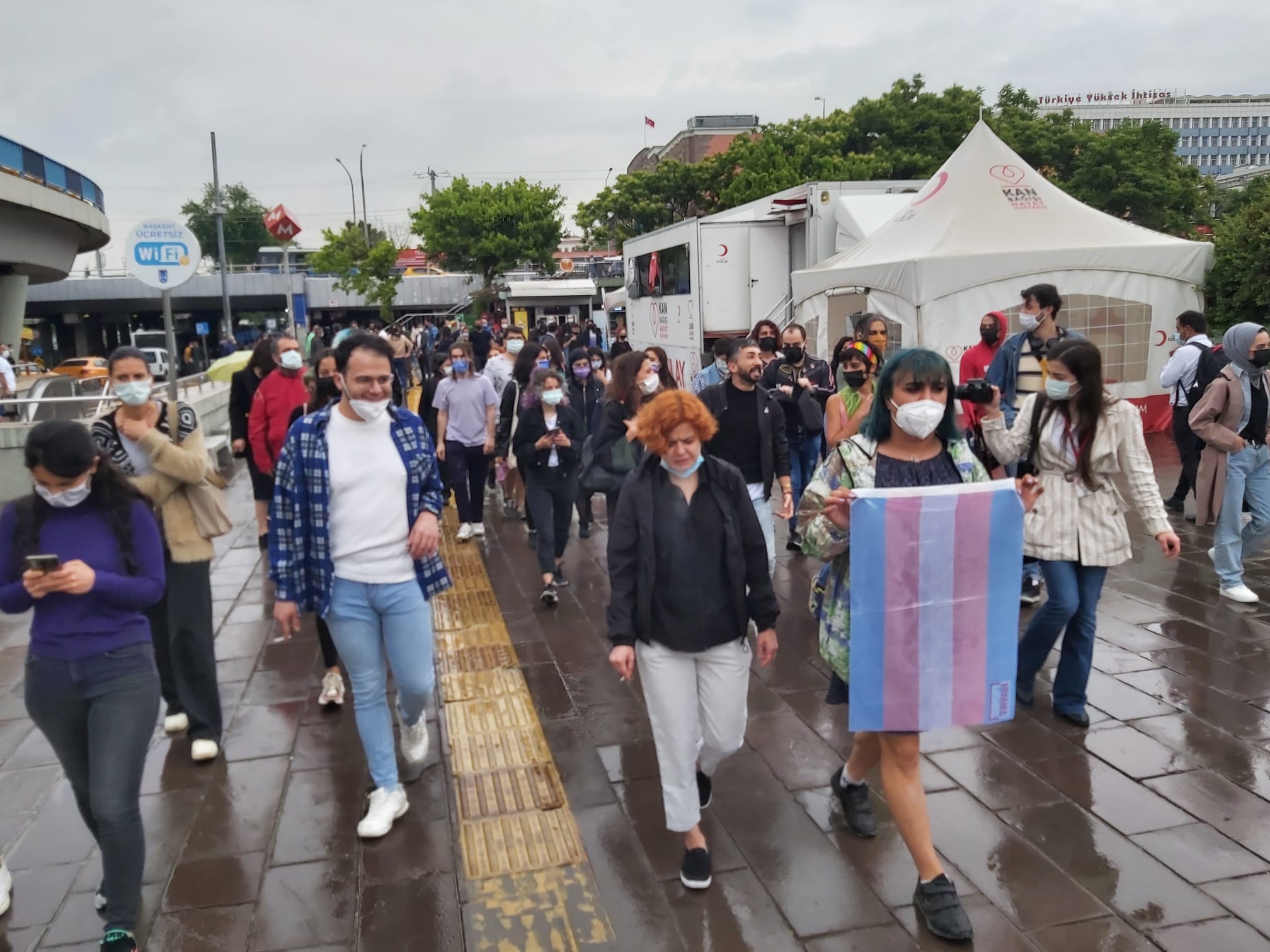 In April 2006, a gang attacked trans women in Eryaman, Ankara. Many trans women were forced to leave their homes in Eryaman. Some of them changed cities, some moved to the Esat District of Ankara. The attacks continued in Esat.

The establishment of the Pink Life Association was an attempt of an organization against these attacks. The trans women who were attacked filed a criminal complaint, charges were pressed. The case that was monitored by lawyers Senem Doğanoglu and Hakan Yıldırım was concluded in 2008. One of the defendants, Şammas Taşdemir, was sentenced to 45 months for wounding with a weapon during a raid on a hairdresser that was frequently used by trans women; The other defendants, Harun Çardak and Ahmet Günay were sentenced to 40 months each, and Ahmet Günay for 34 months for wounding with a weapon against trans women in the Kurtuluş District of Ankara.

The court ruled that the attackers were qualified as gangs, but sentences were all from the lowest limit. There was no sentence for the allegations of pillaging. The verdict was appealed.

Verdict to overturn stated the attackers should be investigated on their gang qualifications, and demanded an investigation regarding the phone call records. The 30th High Criminal Court also complied with the Supreme Court of Appeals' decision and asked the Information Technology and Communications Authority (BTK) for information on whether the attackers communicated with each other.

The case will be re-heard, but the case is in danger of being timed out.

The Eryaman-Esat case has become an endless game of chase due to the changes in the judicial system. The attackers were sentenced in 2008 for extortion, wounding, and wounding as part of organizational activity, but were not convicted of looting. The decision included the definition of 'a gang that came together with thoughts triggered by social prejudices'.

Both the attackers and the trans women who were attacked appealed to the Supreme Court of Appeals. The Supreme Court overturned the decision, saying that 'the court has to make a judgment on looting'. The process after the Supreme Court's overturn decision is a complicated story. With the changes in the legislation, the case has been going back and forth between the courts for years. Att. Doğanoğlu explains this process as follows:

“There were courts authorized with Article 250 of the Turkish Penal Code, but they are now removed. Then they said that it was necessary to appeal to the general court, then those established with TPC Article 10 came into force, and it was said that they have the authority. The case went back and forth too many times. At the end of 2018, with a very absurd justification, the case was returned to the 30th High Criminal Court of Ankara. The reason was that a defendant was not notified. They returned the case because they couldn't locate a person's procuration. After all those transfers the case probably is not intact now. After years, we filed the procuration again, and the case was back on the Supreme Court of Appeals. Then the Supreme Court overturned the decision and the trials began from the beginning…”

What happened in Eryaman and Esat?

Senem Doğanoğlu explains the attacks on trans women and their forced migration as follows:

“The reason the case is called Eryaman is that the events did take place in Eryaman, but in fact, the case that we're talking about right now includes the events that took place in Esat. The construction industry was on a rise in Eryaman, and organized gang attacks against trans women living there began. Over time, the men hired by these construction companies increased attacks on trans women as a gang, in cooperation with the police. After a while, the paramilitary force started saying 'you will pay tribute to us'. But the main goal was to exile. Many of the girls fled to Mersin when the attacks on the houses began. Another group settled in Esat.

“We were able to make a case about Şammas Taşdemir in Eryaman. Dilek İnce, who was killed in 2008, was among the complainants. We also monitored a case in which Şammas Taşdemir was tried for property damage. Şammas was sentenced, but it was converted into a fine. He paid. The decision was finalized and over. He was sentenced to a criminal sentence and the motivations of the attackers were not investigated.

“Law enforcement did not take any action for a very long time when the Esat events started simultaneously. It turned into a process where every night someone gets hurt, properties are getting damaged, people were getting threats over phone calls, and that's the time when the shroud demonstrations started. 'If this violence is not prevented we are going on hunger strike,' they said.

“Silent protests began where LGBTI+ organizations and women's organizations participated, and after a while, the police of Çankaya District of Ankara called us. In short, it was a process in which social pressure was very effective, without social pressure, no one would have instructed The Çankaya police on the issue.

“They were assaulting, wounding people. There were raids on hairdressers. Again, damaging vehicles was very common. There were a lot of incidents at night where they get out of their vehicles with machetes on their hands, run onto the girls, and wounding them. We gathered all these incidents together. Complaints were collected from the victims one by one. Then the perpetrators were all picked up. They've been arrested and the trial process has begun.

“The case was first filed in the general court. It was subsequently transferred to the High Criminal Court due to the allegations of looting. At the first trial, most of the girls came and reported their complaints. They talked about the incidents in detail. In the first trial, we explained that it was an organized crime and that they were a gang. We also changed the face of the courthouse at that time. It was important to see the subject there, to see a subject seeking their right, to see what was legitimate.”