‘Days like IDAHO help to remind us all, not only the LGBT community, but every individual that basic human rights are still being fought for.’ 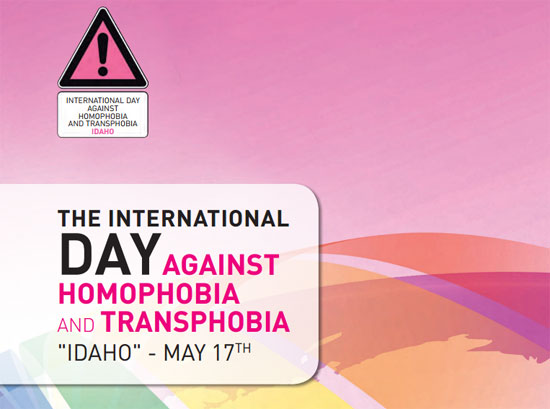 “Days like IDAHO help to remind us all, not only the LGBT community, but every individual that basic human rights are still being fought for.”
With mobilization stretching across all continents and over 100 countries, the 2012 edition of the International Day Against Homophobia and Transphobia broke new records. Several countries joined the celebrations for the International Day Against Homophobia and Transphobia for the first time, including countries among those which keep 1,5 billion people under laws that criminalize same sex relationships.
Hundreds of millions of people reached by anti-homophobia and transphobia messages, as media massively covers IDAHO mobilizations worldwide.
A short list of highlights include :
Activists flew the rainbow flag on the hills above Tehran - Iran
First-ever LGBT events were held in 7 cities across Burma, one of which hosted a 105 year old Transgender woman who addressed the young generations with a message of hope and love
Organizations in Saint Petersburg defied the recently passed law prohibiting any form of LGBT activism, flying hundreds of balloons in the city skies as part of the global ’Rainbow Flash-mob’ action.
Unesco convened an international conference to launch their first ever publication focusing solely on the issue of Sexual Orientation and Gender Identity, consisting of a collection of best-practice cases from around the world.
As part of the Pride action week held for IDAHO in Cambodia, a float of ’tuktuk’ (local three-wheeler scooter taxi) raced under heavy monsoon rains, and included the participation of the British Ambassador.
The IDAHO Committee held with the OECD and the World Bank an international conference reflecting on the economical cost which homophobic and transphobic policies bear on developing countries, and announced a research project on this issue.
More than 50 EU politicians collectively recorded a video to support LGBT young people, on the mode of the ‘It Gets Better’ campaign. At UN level, the heads of UNAIDS and UNDP marked the day and added their voices to the High Commissioner for Human Right who recorded a video ahead of the day in support of activists’ mobilizations.
In several countries in Latin America, organizations pursued, with the support of the World Health Organization, last year’s IDAHO ’Cures that Kill’ campaign which aims at fighting against so-called reparative ’cures’
In Cuba, the President’s daughter, Mariela Castro, once again lead the annual IDAHO street parade.
In other places, people were invited to get a ’vaccine against homophobia’, by activists dressed as doctors. In high school, colleges and universities, students held ’IDAHO classes’, to teach the teachers how to confront homophobia and transphobia in the class.
In many countries like Brazil, the United Kingdom, France, China, Canada, and others, the Day is being celebrated across the whole nation, including in places where ’traditional’ LGBT celebrations like Pride marches are not possible.
As an activist from the Unites Arab Emirates wrote: "‘Days like IDAHO help to remind us all, not only the LGBT community, but every individual that basic human rights are still being fought for. LGBT rights are not special rights, they are human rights!"This sentence surely resonates in all of us as the one overarching vision that binds us all together, beyond our diversities, which we should celebrate.
All in all, once again, a vibrant, diverse and imaginative IDAHO. A celebration of courage, determination and creativity! The annual report brings many more stories and pictures from around the world. It can be accessed here: http://dayagainsthomophobia.org/IMG/pdf/IDAHO2012AnnualReportHR.pdf
Contact:
http://dayagainsthomophobia.org